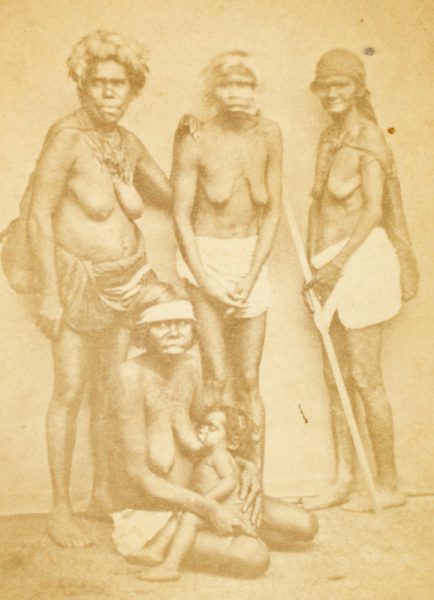 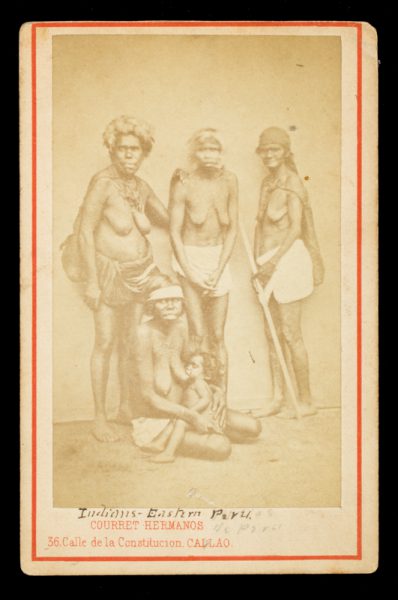 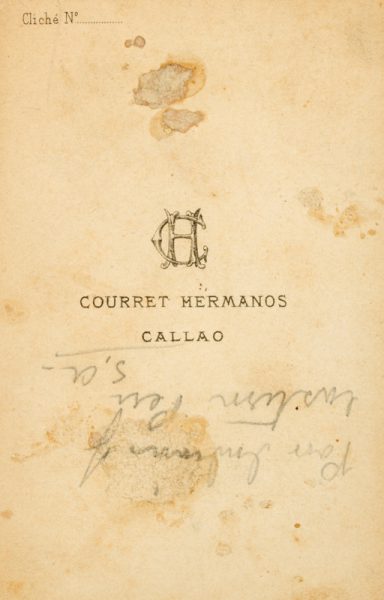 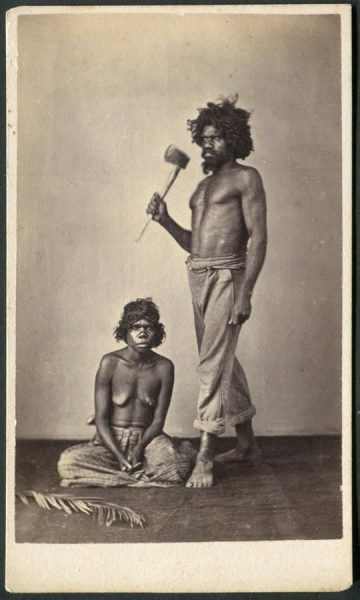 Group of Aboriginal women and breastfeeding infant, Brisbane, circa 1868

Albumen print photograph, carte de visite format, 90 x 56 mm, mount 103 x 67 mm; recto with red printed border, lower margin with imprint of Courret Hermanos, 36 Calle de la Constitucion, Callao in red, and a contemporary inscription in ink Indians – Eastern Peru and a faint pencilled inscription in the same hand Indios de Peru; verso with monogram of Courret Hermanos and slightly later pencilled inscription Poor Indians of eastern Peru; the albumen print has lost some contrast and has a couple of tiny ink spots and a small scratch at bottom centre, not affecting the main portion of the image; otherwise it is in good condition; the verso of the mount has some marks caused by removal from an album page, but is otherwise clean.

This important studio photograph was taken in Brisbane, Queensland, around 1868. It shows a group of four Aboriginal women, one of them breastfeeding her child. Although their modesty is partly preserved by the rudimentary garments of trade cloth around their waists, the salacious photographer has forced the women to pose topless, no doubt in the belief that this will potentially increase the sales of his commercial carte de visite image. The inscriptions on the mount are, of course, erroneous: the incorrect identification of indigenous peoples on photographs was a common occurence in the nineteenth century.

The real significance of this carte de visite lies in the fact that it is one of very few known photographic images of indigenous Australians published outside Australia prior to 1885, when R.A. Cunningham's troupe of Aborigines was photographed in various studios in Germany and England. The Aboriginal cricketers from Victoria's Western District toured England in 1868, and photographs of these men were taken and sold by English photographic studios. However, the only extant example of these images that we can locate in Australian public collections is a carte de visite photograph taken of the cricketers at Exeter, held in the National Library of Australia (PIC Box A52 #P208; exhibited: “How's That”, National Library of Australia, 2 February 2007 – 17 June 2007). The other early photograph of indigenous Australians published outside Australia held in an Australian collection happens to be another carte de visite of the Peruvian photographic firm Courret Hermanos, published in Lima around 1868 or 1869. It is held in the National Library of Australia (Bib. ID 3510476). Fortuitously, it bears a collector's name and a date – Dr. Ridgway, 1869; like the present carte de visite, it also bears an erroneous contemporary inscription: Valparaiso, Chile / Native of Valparaiso. Furthermore, it was also taken in a Brisbane studio – probably that of Daniel Marquis – and shows a group of Australian Aboriginal men, women and children.

There can be little doubt that both the present carte de visite and the Courret Hermanos carte de visite in the National Library of Australia were unauthorised copies, pirated from a group of original cartes de visite which would have been brought across the Pacific to Callao by a traveller who had acquired the photographs in Brisbane around 1868. The firm of Courret Hermanos had a particular interest in cartes de visite of indigenous types; although it specialised in South American subjects, it is also known to have sold photographic portraits of Tahitians and Marquesan Islanders. However, it seems highly unlikely that there was any formal commercial agreement between one or more Brisbane photographic studios and the Peruvian firm.

The studio backdrop in the present carte de visite suggests that the photograph may have been taken by Samuel Duesbury, active in Brisbane between 1868 and 1885. In 1868 Duesbury's premises were in Brunswick Street, Fortitude Valley. We have included in this listing an image of an identified studio portrait by Samuel Duesbury, now in a private collection, which is of an Aboriginal couple (man standing holding an axe; woman seated cross-legged on the floor). This Duesbury portrait appears to show a backdrop and floorcovering identical to those in the present Courret Hermanos carte de visite.