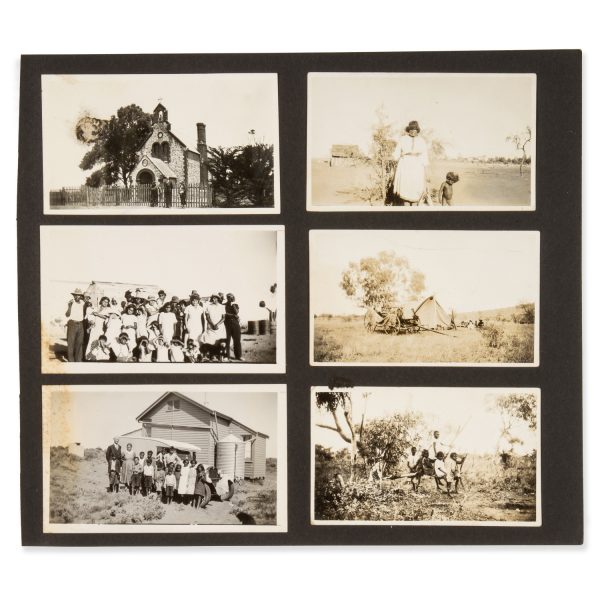 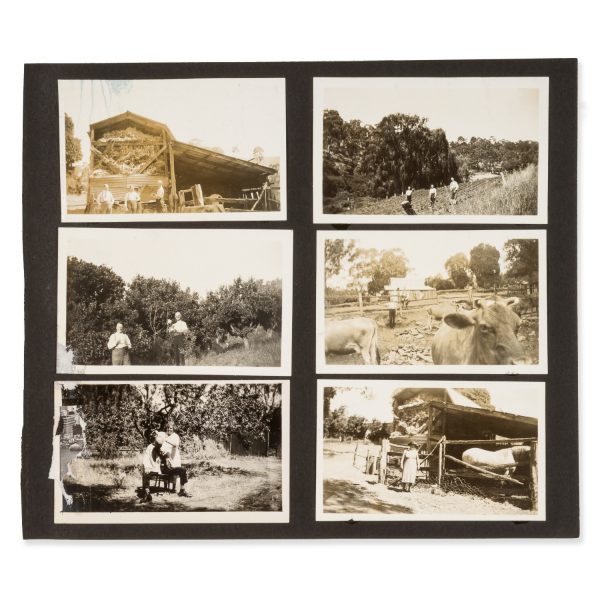 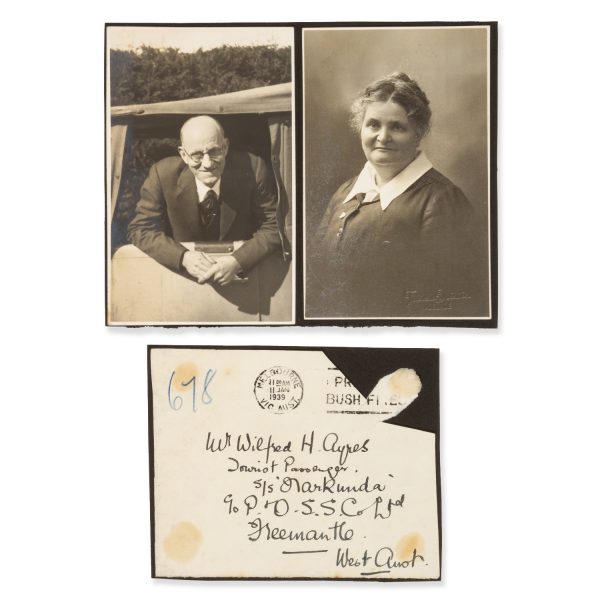 Group of photographs taken at Poonindie on the Eyre Peninsula, South Australia, including portraits of missionaries Annie Lock and her husband James Johansen. Late 1938.

20 (twenty) Kodak prints in format 65 x 110 mm, taken by English evangelist Wilfred H. Ayres during a visit to South Australia at the end of 1938, showing missionaries Annie Lock and James Johansen with Aboriginal groups and white parishioners in and around Poonindie on the Eyre Peninsula, and including a key shot of Lock, Johansen and a senior Aboriginal man outside the Poonindie Mission church; 1 (one) bromide print, 130 x 85 mm, a half-length portrait of Johansen leaning out of his missionary van; 1 (one) gelatin silver print, 130 x 85 mm, a studio portrait of Annie Lock with the blind stamp of Adelaide photographer Thelma Duryea; all twenty-two photographs are laid down on card cut from the pages of a broken-up 1930s travel album and are in very good condition, aside from two of the snapshots which have some minor edge damage; [together with] a postcard-size gelatin silver print, a full-length portrait of Wilfred Ayres during his Australian tour, found loose in the same album.

‘Ann Lock (1876-1943), missionary, was born on 1 August 1876 at Rhynie, South Australia, seventh child of English-born parents Walter Lock, share-farmer, and his wife Ann, née Stokes. Young Ann had little education and worked as a dressmaker before 1901 when she entered Angas College, Adelaide, a ‘Missionary Training Home for Ladies’. Raised as a Methodist, she joined (1903) the interdenominational Australian Aborigines’ Mission (United Aborigines’ Mission from 1929). She was to devote thirty-four years to nursing, feeding and clothing Aborigines, providing them with spiritual instruction, and educating and caring for their children.

In 1905-09 Lock was based at Forster, New South Wales. Moving to Western Australia, she successively served (1909-12) as assistant and matron of the A.A.M.’s Dulhi-Gunyah Orphanage for Aboriginal children in Perth. She founded a mission at Katanning, then worked at the Carrolup Native Settlement, 20 miles (32 km) away, until personality clashes led her to leave in 1917. As A.A.M. representative, she joined an independent evangelist Sydney Hadley at Sunday Island Mission, near Derby, where she remained until 1923. After two years at Oodnadatta in South Australia she felt called to the Northern Territory in 1927. Lacking the full support of the A.A.M. and encountering opposition from officials and settlers, she toiled alone at Harding Soak, 100 miles (161 km) north of Alice Springs. Drought forced her to retreat to Katherine in October 1928.

Two months earlier a number of Aborigines had murdered a White man Fred Brooks near Harding Soak. A police party subsequently killed at least seventeen and possibly seventy Aborigines. In 1929 Lock was recalled to Alice Springs to give evidence to a board of inquiry investigating the massacre. She achieved temporary prominence when newspapers reported H. A. Heinrich’s allegation that she had told him she would be ‘happy to marry a black’. In its report the board blamed the racial unrest in part on ‘a woman Missionary living amongst naked blacks thus lowering their respect for the whites’. The U.A.M. condoned Lock’s unusual preference for working alone as a missionary. Independent and forthright, she retained an unshakeable faith in God and her calling in the face of hostility from European society.

Ryan’s Well station, some 78 miles (125 km) north of Alice Springs, was her base from June 1929. Next year the owner asked her to leave and she travelled 200 miles (322 km) further north by buggy to Boxer Creek in the Murchison Range. She stayed at what is now known as Annie Loch Waterhole until September 1932. Back in South Australia in 1933, she made another long buggy trip, driving from Crystal Brook to Ooldea where she pioneered a mission until 1936. After marrying a widower James Johansen on 15 September 1937 at the registrar’s office, Port Augusta, she resigned from the U.A.M. Johansen belonged to the Plymouth Brethren and ministered to Whites living on Eyre Peninsula; despite suffering from diabetes, Annie accompanied him on his travels. She died of pneumonia on 10 February 1943 at Cleve and was buried in the local cemetery. Her estate was sworn for probate at £95 18s.’