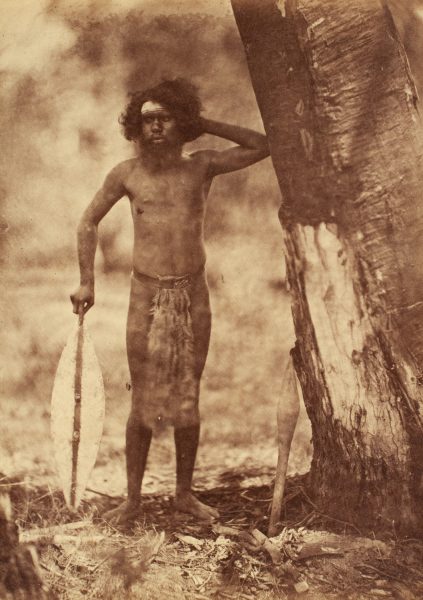 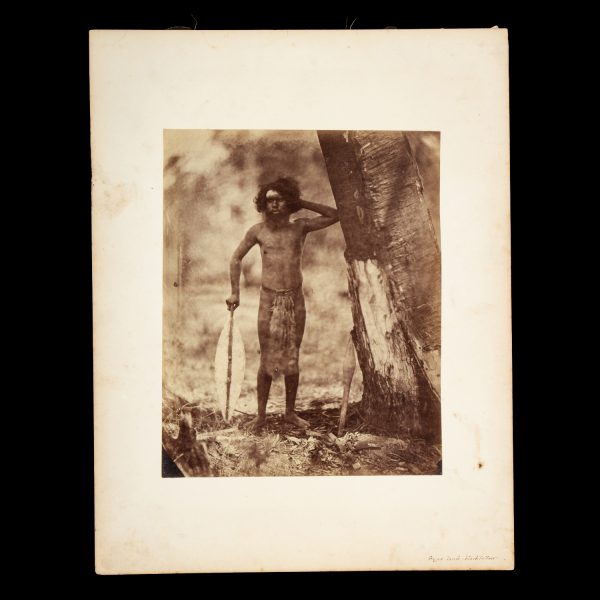 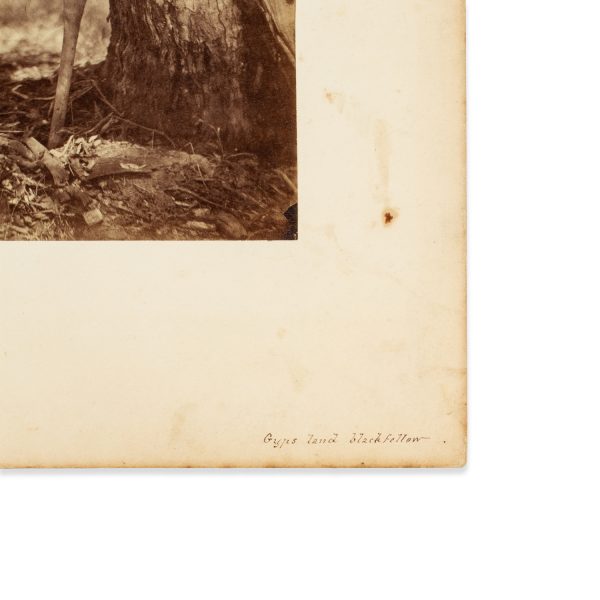 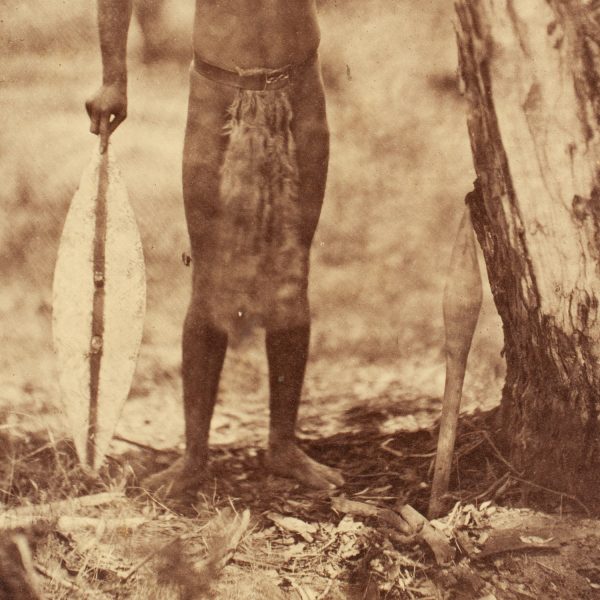 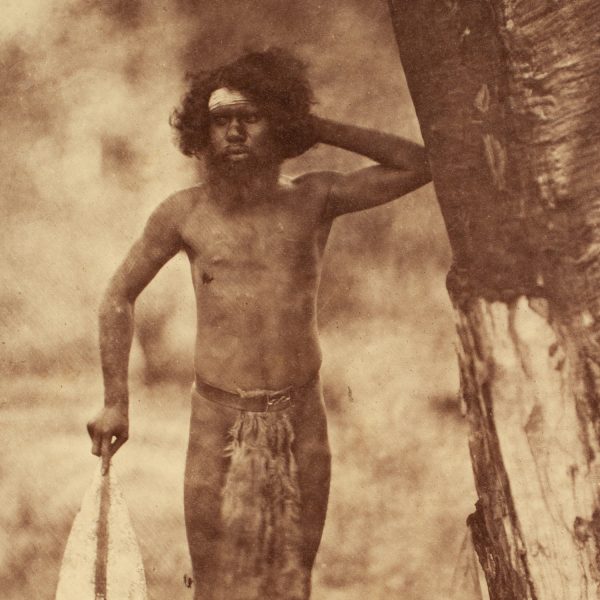 [Title from inscription on mount]. Albumen print from collodion wet-plate negative, 239 x 193 mm, laid down on its original board mount as issued, 372 x 287 mm; fully contemporary inscription in ink to bottom margin of mount, Gyps land blackfellow. This is an exceptional print with beautiful tones and great clarity; the mount has a few insignificant marks, but is otherwise clean and without foxing.

A masterpiece of nineteenth-century colonial photography from the series Sun Pictures of Victoria, produced in 1858 by Antoine Fauchery and Richard Daintree.

The image dates to the immediate aftermath of the protracted frontier conflict between white settlers and the Gunaikurnai people (see Peter Gardner, Gippsland Massacres: the Destruction of the Kurnai Tribes, 1800–1860, Ngarak Press, 1993), but also crucially to the period just before the establishment of mission-reserves in the region: Lake Tyers (Bung Yarnda), 1861; Ramahyuck, 1863; and Coranderrk, 1863.

The strikingly rhythmic composition, in which the interplay of light and dark creates an almost chiaroscuro effect, shows a man holding a broad shield, his raised elbow resting against a tree. He is probably a Gunaikurnai warrior (although this has been questioned – see below). He wears a leek leek (a headband made from animal sinews) and a possum skin girdle which is tied by a European leather belt with metal clasp. At his feet is an array of implements, including two hunting boomerangs and a waddy (fighting club) which is propped against the base of the tree. The tree has a scar where the bark has been removed, possibly for use in making a shield (perhaps even the one pictured?) or shelter.

This important large-format image was one of twelve photographs with indigenous subjects published by Fauchery and Daintree. Taken at Franklinford in Central Victoria and in Gippsland, these are the earliest known paper print photographs of Victorian Aborigines taken by a professional photographer, although surviving salt paper prints made earlier in the 1850s, attributable to squatter and amateur photographer John Hunter Kerr, document Dja Dja Wurrung people at Fernyhurst station in the Loddon district.

The image is reproduced as Plate 51 in Reilly and Carew, Sun Pictures of Victoria : the Fauchery-Daintree Collection, 1858 (Melbourne : Library Council of Victoria, 1983), where the authors make the suggestion that three out of the twelve photographs with indigenous subjects are possibly attributable to Fauchery, on the basis that they are more “romantic” and stylised compositions; the other nine, being more documentary in nature, are likely to have been the work of Daintree (ibid., p. 22).

The precise location of “Gyps land blackfellow” has not been identified; at the time the photograph was taken the term “Gippsland” could equally have applied to the southern end of the Yarra Ranges, as well as to the wider region further east and south. It has indeed been suggested – although without supporting evidence – that the man photographed by Fauchery was a member of the Wurundjeri nation (Woiwurrung language group, Kulin alliance). (See Carol Cooper, Early photographs of Aborigines in the Picture Collection. La Trobe Journal, no. 43, Autumn 1989).

It was at this point that Daintree met Antoine Fauchery. The two shared similar interests and both were proficient in the new field of photography. They went into business together to publish a series of their own photographs of the colony of Victoria. This series of fifty large format photographs, created using the new collodion wet-plate process, was titled Sun Pictures of Victoria, and was released in ten monthly instalments from mid-1858. Surviving individual examples of any of the photographs from Sun Pictures are rare indeed (see below). Sun Pictures unquestionably constitutes the most important photographic record of the colony prior to 1860, in terms of the quality of the prints and the range of subject matter. It contains scenes of life on the goldfields, highly significant portraits of Aborigines and of prominent colonizers such as Sir Henry Barkly, Bishop Perry, Edouard Adet and Sir John O’Shanassy.

In a review of the first instalment of five photographs in Sun Pictures, published in the Melbourne newspaper The Argus on 13 August 1858, the journalist was glowing in his praise:

‘Sun Pictures of Victoria: Under this title Messrs. A. Fauchery and R. Daintree have just published the first monthly part of a work which it is proposed to extend to ten numbers, and which is to comprise 50 large photographs, in illustration of our colonial celebrities, our landscape and marine scenery, and our private and public architecture. The invention of the stereomonoscope, by means of which the objects exhibited in a sun picture, of any size, assume solidity and relief to the eye of the spectator, gives an additional value to photographic transcripts of nature. The collection under notice are admirable specimens of this branch of art, for art it is; as, irrespective of the skill requisite to manipulate successfully, the manipulators must also possess the artistic faculty in the choice of subjects, in the selection of the most picturesque point of view, and in discerning the most favorable aspects or accidental dispositions of light and shade. With this faculty Messrs. Fauchery and Daintree appear to be endowed, and it appears to advantage in more than one of the pictures now before us. These are five in number, and merit separate notice. No. 1. The portrait of His Excellency the Governor has much of the effect of a sepia drawing, but with a softness and delicacy of finish such as a sepia drawing rarely exhibits. It Is especially rich in tone, and strikingly like the original, which (paradoxical as the assertion may appear) a great many photographic portraits are not… We may add that the pictures are mounted on cardboard, and will constitute, when the full number has been issued, a work of particular value and interest’.

One of the treasures in the State Library of Victoria’s photographic collections is the album Sun Pictures of Victoria 1858. It contains all fifty of Daintree and Fauchery’s albumen prints for this series; the print of the Aboriginal man holding a broad shield bears a caption on the mount which is worded identically (i.e. Gyps land Blackfellow) to that on the example offered here. The SLV also holds an album of photographs compiled by the Governor of Victoria, Sir Henry Barkly, which includes another individual copy of this albumen print, titled on the mount Aboriginal black Gipps Land Victoria.

The State Library of Queensland holds an album containing forty-seven photographs by Daintree and Fauchery (APO-11 Australia by A. Fauchery & R. Daintree 1858); from the description of the content, it is apparent that this is an almost-complete set of the Sun Pictures of Victoria series, although this fact is not noted in the catalogue entry. It is not clear from the description whether the print of the man holding a broad shield is present in the album. The SLQ also holds another album of photographs by Fauchery (and presumably Daintree?) (APO-9a Antoine Fauchery Photograph Album ca. 1858). However, the catalogue entry summarizes the content only as Album of views of Melbourne and countryside, including mining camps. No mention is made of Aboriginal subjects; neither is the number of images in the album noted, but again, it seems evident that this is perhaps also an incomplete set of the Sun Pictures of Victoria series.

In short, it appears that there are no more than two Australian public collections which hold other examples of Gyps land blackfellow.