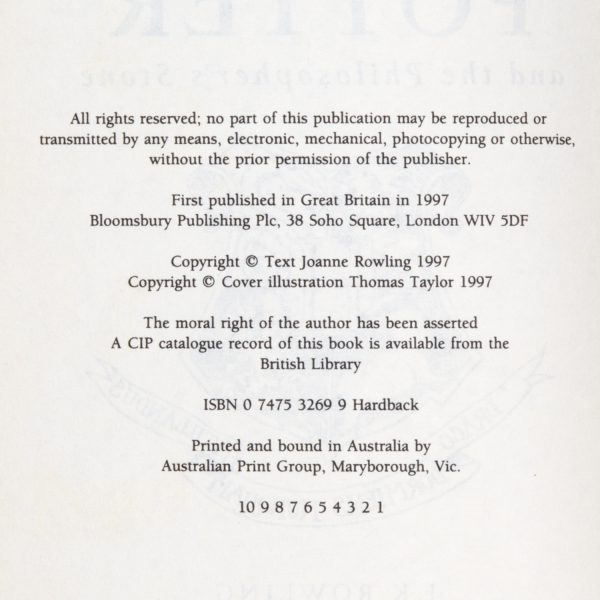 The true first edition of Harry Potter and the Philosopher’s Stone was printed in London on 30 June 1997, and would spawn a multi-billion dollar industry of publications, films and merchandise. 500 copies were published in hardback, of which 300 or so were distributed to UK schools, where they faced the usual school library treatment of stickers, lamination and sticky fingers. A trade paperback was issued in a few thousand copies the same year. In 1998 the first US edition appeared under the title Harry Potter and the Sorcerer’s Stone.

While the colophon states a publication date for the Australian edition of 1997, there are two giveaways that this date is misleading. On the dustjacket is an advertisement to say the book won the Smarties Book Award of 1997 (which was awarded in November) and on the verso of the title page is the statement ‘Also available : Harry Potter and the Chamber of Secrets’. As Chamber was first published in the U.K. on 2nd July 1998, the Australian edition must be 1998 or even possibly early 1999.

A fine example of the first Australian edition of one of the icons of children’s literature.