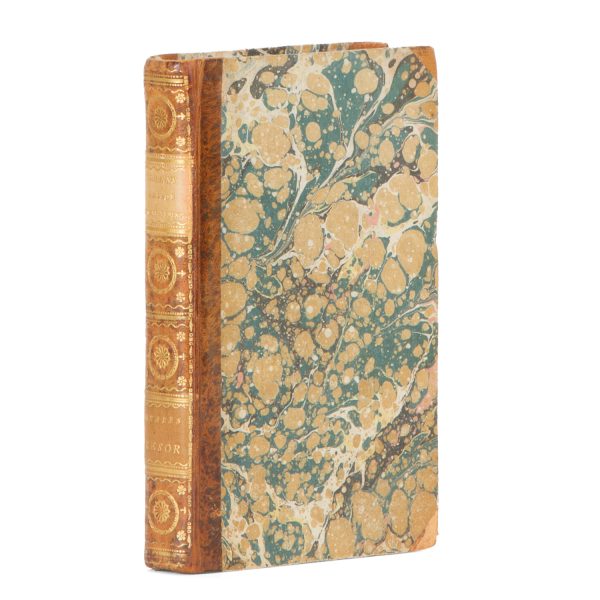 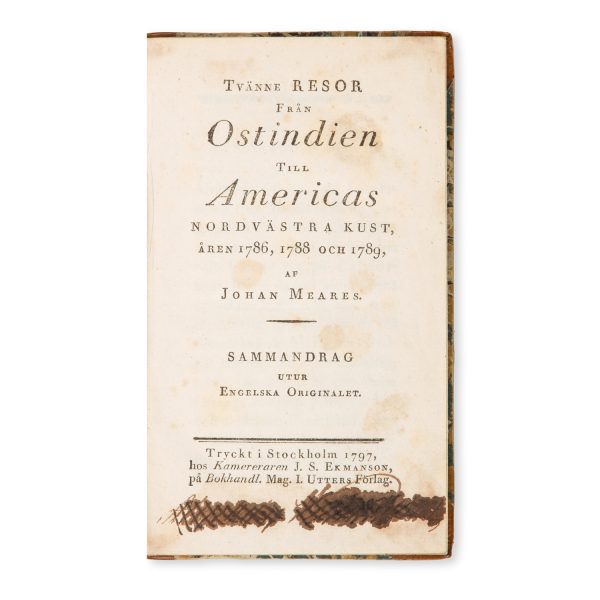 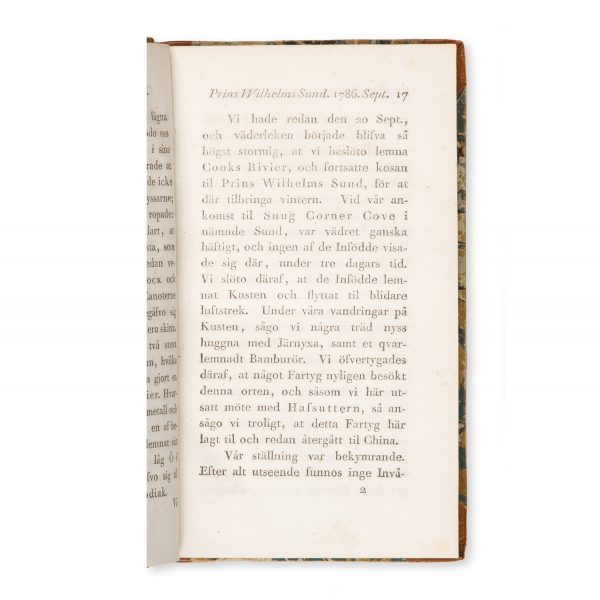 Rare first Swedish edition of John Meares’ Voyages made in the years 1788 and 1789, from China to the North West Coast of America. To which are prefixed, an introductory narrative of a voyage performed in 1786, from Bengal, in the ship Nootka (London, 1790). The translator was Samuel Ödmann, who also wrote the introduction.

The State Library of New South Wales holds the only copy in Australian collections.

In 1785, while based in India as a merchant, John Meares (c. 1756-1809) formed the Northwest America Company, having hatched a scheme that would allow him to illicitly collect furs through trade with the peoples of the Pacific Northwest Coast, and onsell them in China. Meares did not license his ships with the East India Company, instead attempting to conceal his illegal mercantile activity by registering his ships in Macau and having them fly the flag of Portugal, thus technically avoiding the need for the licences which were issued by the East India Company to all British traders.

In March 1786 he sailed from Calcutta in the Nootka, and explored part of the coast of Alaska. Finding himself stranded in Prince William Sound the following winter, Meares was rescued by the properly licensed British trader George Dixon, and was able to continue on to China via the Sandwich Islands. Despite giving Dixon his word that he would not trade in the Northwest again, Meares would later sue him for “overcharging” him for the supplies that had saved himself and many of his crew.

In January 1788, Meares set out from Macau on a new expedition to the Pacific Northwest, this time with two vessels, both under the Portuguese flag and with Portuguese names. The ships arrived at Nootka Sound, on Vancouver Island, in May, and Meares proceeded to conduct trade with the coastal peoples of what is now British Columbia throughout the summer. Meares also claimed that he acquired some land in Nootka Sound from the Maquinna, chief of the Nuu-chah-nulth (Nootka), although Maquinna would later deny this. Whilst in Nootka Sound, Meares and his men – who included Chinese artisans – built a sloop which they named North West America, which lays claim to being the first non-indigenous sea-going craft built in the Pacific Northwest.

On his return voyage to China, Meares called in at Kauai in the Sandwich Islands, where he took on board a Hawaiian chief, Tianna (Kaiana). Meares took Tianna to Canton, where remarkably he found another Hawaiian, a woman by the name of Winée, who had been left behind there by captain Charles William Barkley of the Imperial Eagle. (Meares would later return Tianna to Kauai, but Winée would die on the voyage home. It is generally acknowledged that Winée and Tianna are the first Hawaiians to have travelled outside the Polynesian Triangle).

Remaining in Canton, China, in 1788-89, Meares next organised a partnership called the Associated Merchants Trading to the Northwest Coast of America. This company then joined forces with the King George’s Sound Company. Under James Colnett, the fur traders’ ships departed for Nootka Sound to establish a permanent trading post. In the meantime, aware of the British fur traders’ presence at Nootka Sound, and also fearing that the Russians would establish a fortified settlement there, the Spanish decided to assert sovereignty over the northwest coast, as far north as Prince William Sound. In May 1789, Esteban José Martínez arrived at Nootka Sound, under orders from the Viceroy of New Spain to occupy it. One of Meares’ company ships was sent away and over the course of the summer others were seized by the Spanish. The North West America was renamed Santa Saturnina and in 1791 would be used by José María Narváez to explore the Strait of Georgia.

Meares sailed for England as soon as word reached him at Canton of the Spanish intervention at Nootka. In April 1790 he was able to submit a report to Grenville, the Home Secretary, in which he embellished the truth about the nature of his settlement in Nootka Sound and concealed his company’s financial failures. Driving an all-too-eager anti-Spanish sentiment in Britain, the report initially resulted in the Royal Navy making preparations for hostilities; but when an ultimatum was delivered to Spain, diplomacy prevailed: war was averted through the Nootka Convention, an outcome which proved to be the catalyst for Vancouver’s voyage in the Discovery.