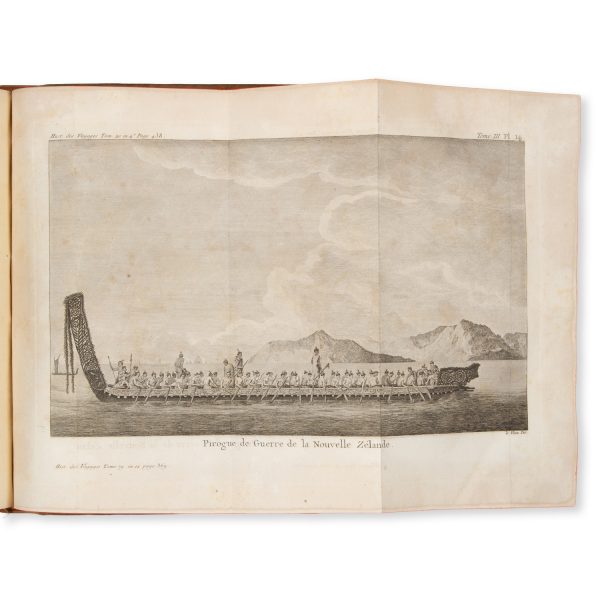 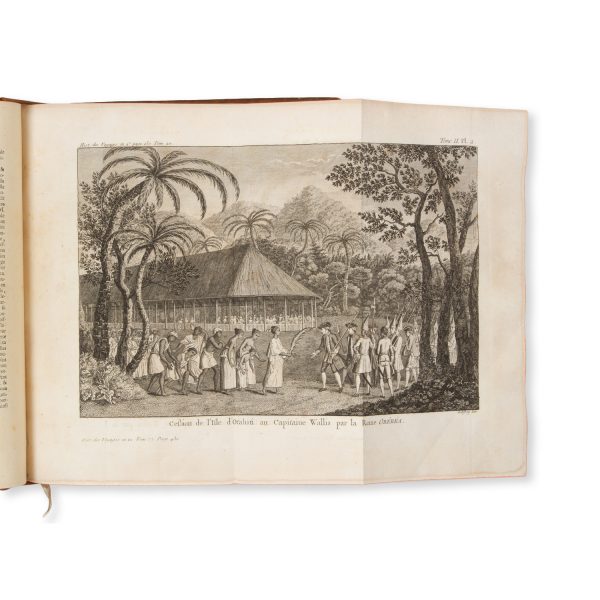 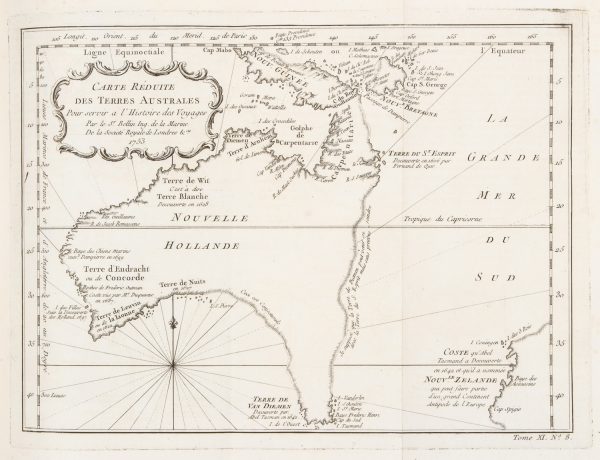 The complete set of the first edition of Prévost’s monumental encyclopaedia of voyages, with all supplemental volumes; in the luxurious large paper format, and in a fine contemporary French binding.

‘An important and scarce collection, which includes accounts of all the principal early Australian voyages, such as Saavedra, Gaetano, Torres, Mendana, Quiros, and the Nodals, as well as an account of the discovery of Australia by the Dutch, early voyages to New Guinea and the Palau Islands, and Roggeveen’s voyage to Terres Australes … Pacific voyages include those of Magellan, Schouten and Le Maire, Drake, Sarmiento, Cavendish, Spilbergen, Narbrough, Rogers, Cowley, Frezier and Anson. Particularly full accounts are given of the Dutch and French voyages to the East Indies, voyages to China, and the British East India Company’s voyages to India and Celyon’ – Hill.

Prévost’s vast collection of historical and contemporary voyages was published over 45 years, with the final volumes issued well after the editor’s death. As noted by Hill, the first seven volumes of Prévost are a translation from John Green’s A new general collection of voyages and travels (1745 – 47), with volumes 8 to 15 compiled by Prévost and continued by his successors. The eleventh volume deals with the exploration of the Pacific, with accounts of the voyages of Tasman, Schouten and Dampier. It includes plates of the plants of New Holland and New Guinea, and a map of the known coastline of New Holland with a projected pre-Cook Eastern coast. The sixteenth volume (1761) is a 776-page index volume for the first fifteen volumes, and the seventeenth volume contains supplements and revisions to the travels already described. Volumes 18 (1768) and 19 (1770) contain new travels to Iceland, Greenland, Kamchatka and the Arctic. Each of the final four volumes was published by a different firm (Pancoucke, Rozet etc.). The final volume, the twentieth, was published by Maradan in 1789, nearly twenty years later. It commences with Byron’s 1760s circumnavigation and continues with voyages to the Southern Ocean, including those of Carteret, Wallis, Bougainville, and Cook, with an illustrated account of his first voyage to New Holland. The year 1789 saw the beginning of the most significant social upheaval in French history, and one might expect that but for the events of the French Revolution, the revived publication would have seen Cook’s remaining voyages occupying the pages of the twenty-first volume.

Bound in at the end of the first volume is a copy of the publisher’s prospectus, calling for subscriptions to the Histoire between the dates 1 December 1745 and 1 March 1746, after which subscriptions are to be closed. Each volume was priced at 18 livres (pounds), with a large paper copy available at 27 livres – a substantial premium. It is stated that only a few copies of the large paper issue are available: ‘On payera pour le grand papier 27 liv. … On en tire peu d’Exemplaires‘. These large paper editions are printed on thicker paper with wider margins, and are several centimetres taller and wider than the standard edition.

Prévost’s Histoire générale des voyages would prove hugely popular in France and across Europe. It was destined to stand as the most thorough and comprehensive account of exploration published in the eighteenth century. A revised translation of Green and Prévost edited by the Dutch bureaucrat Du Bois was published from 1747 – 1789 (Landwehr 266), with Dutch, German, Danish and Spanish translations following. An octavo edition was also published at a cheaper price.