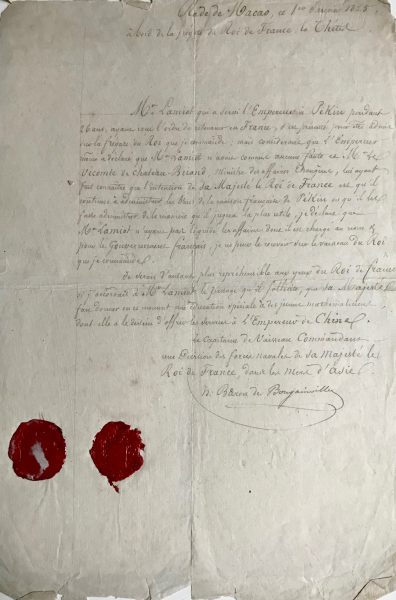 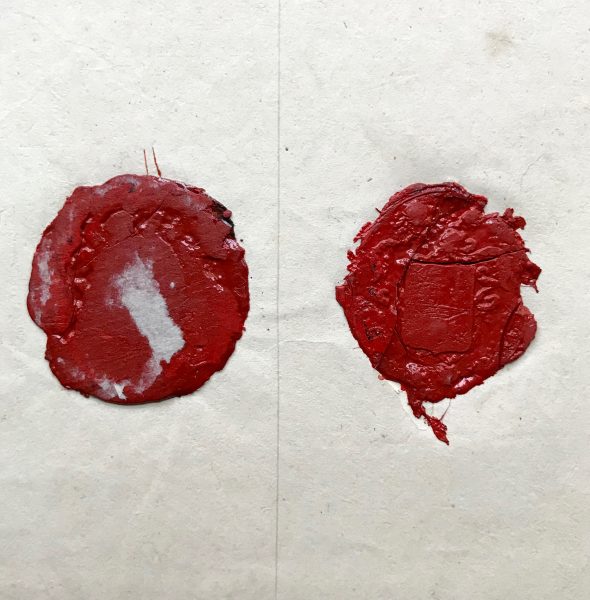 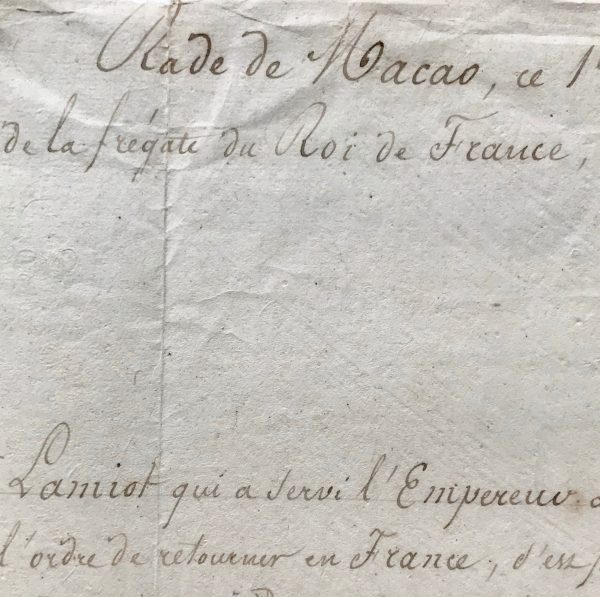 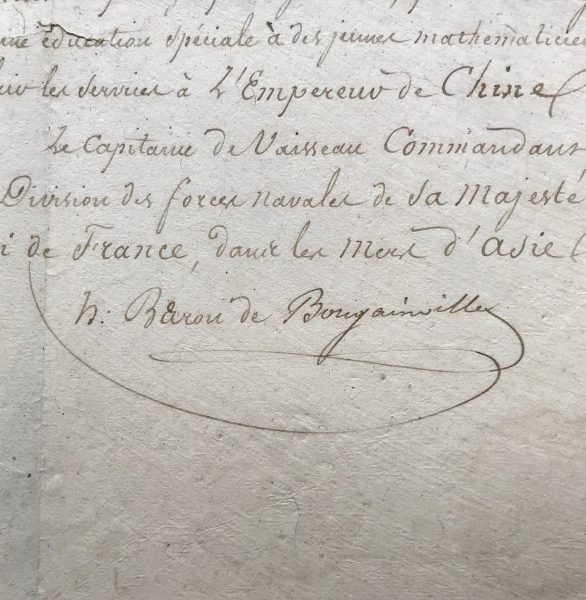 Hyacinthe de Bougainville : autograph letter, signed, written from the harbour of Macao in 1825 during his circumnavigation in the “Thétis”.

Rare, unpublished letter of Baron Hyacinthe de Bougainville (1781-1846) written at Macao aboard the corvette Thétis during its circumnavigation of 1824-26.

Baron de Bougainville was the son of the navigator Louis-Antoine de Bougainville (1729-1811). Earlier on in his naval career he had taken part in the Baudin expedition to New Holland of 1800-1803. In the years 1824-26 he led a diplomatic mission to East Asia on a round the world expedition with the warships Thétis and Espérance. His ships set sail from France in March 1824 and visited Réunion, Pondicherry, Manila, Macao, Cochin-China and Soerabaia. On his return voyage across the Pacific – retracing in part his father’s famous circumnavigation of 1766-1769 – he called in at Port Jackson for three months during 1825. Whilst in Sydney he erected monuments to La Pérouse and Receveur at Botany Bay.

Bougainville’s letter written at anchor off Macao concerns the Lazarist missionary Louis-François Lamiot (1767-1831), superior of the Vincentians in China. Having first arrived in Peking in 1794, for many years Lamiot had acted as court interpreter until, in 1820, he was banished from the empire owing to his association with the disgraced Father Clet. He was living in exile at Macao at the time of the arrival of the Thétis and Espérance at the end of 1824. Bougainville writes: ‘[Lamiot], having received the order to return to France after serving the Emperor in Peking for 26 years, presented himself to be admitted on the King’s frigate that I command’. Bougainville, however, acting on the advice of the king and of the Vicomte de Chateaubriand, writes that he has refused to take Lamiot on board his ship: Lamiot is ordered to return to Peking to attempt to administer the French mission there as best he can. He states: ‘I would be all the more reprehensible in the eyes of the King of France if I granted M. Lamiot the passage he is asking for’, since Lamiot is currently in a position to offer his services to the Emperor of China as a tutor for young mathematicians. (The French mission was as much a scientific enterprise as it was an apostolic one. Contrary to the King of France’s wishes, however, Father Lamiot would remain in Macao until his death in 1831). Bougainville signs the letter with his title: ‘The Ship’s Captain Commanding a Division of the naval forces of his Majesty the King of France, in the seas of Asia. H. Baron de Bougainville’.

While Bougainville’s brief communiqué is undoubtedly a piece of official correspondence, containing information of a diplomatically sensitive nature, it is not clear for whom precisely it was intended; nor can we be absolutely certain whether it was carried by him back to France or delivered to an unknown party en route. Immediately after leaving Macao, Bougainville’s ships called at Da Nang, where the French were treated civilly for several weeks in January-February 1825, but were refused an audience with the Emperor Minh Mạng. The expedition then visited Soerabaia, Sydney, Valparaíso and Rio de Janeiro before returning to France.