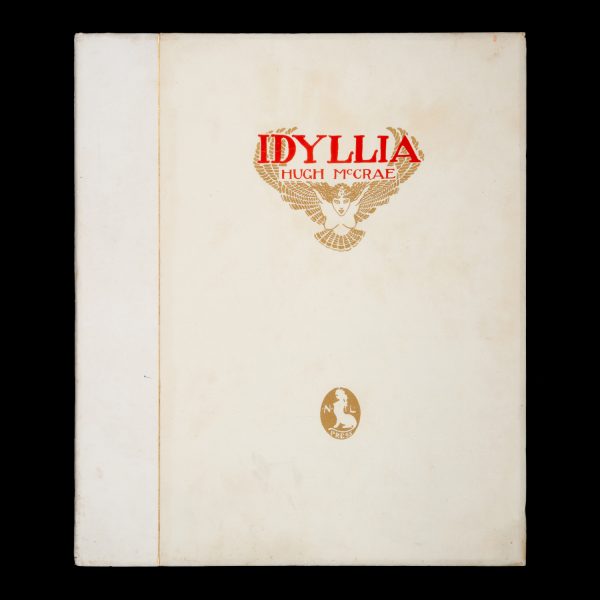 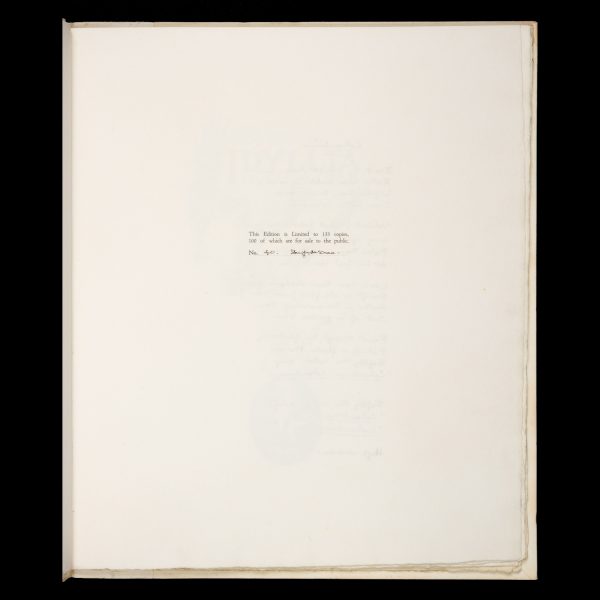 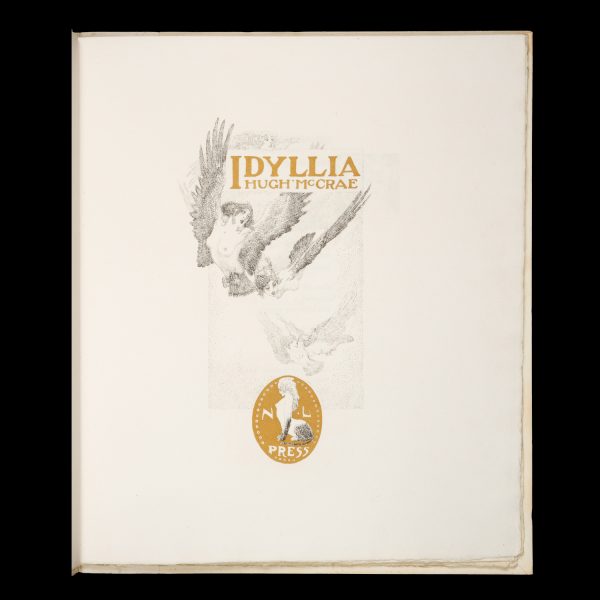 Idyllia. (The author’s own copy)

[Sydney] : N.L. Press, [1922]. Large quarto (418 x 355 mm), bound in white calf over white papered boards with Norman Lindsay decoration in gold and red (a few light marks), 35 pp, with Lindsay decorations in black highlighted with gilt, further illustrated with five large original Norman Lindsay etchings with titled tissue guards tipped-in, each signed and numbered by the artist; the original etchings are ‘What the Deer Said’, ‘Robin Hood’, ‘Pantera’, ‘The Yellow Lady’ and ‘The Talking Breasts’. Limited to 133 copies of which 100 were for sale to the public, signed by Hugh McCrae (this copy is number 40); opposite the title page McCrae has inscribed the full text of his most famous poem, Colombine, with his signature at the foot; a superb and unique copy.

There is no mystery as to why Hugh McCrae would have chosen his poem Colombine to inscribe in his own copy of his second collaboration with Norman Lindsay. Bloomfield described Colombine as ‘a small lyrical masterpiece’ and it is widely regarded as the finest of McCrae’s works. This was the poem which, in a very real sense, had helped rescue the poet from poverty two years earlier and which would take on an almost talismanic significance for him. During a chance encounter in George Street with his friend Norman Lindsay, when McCrae had shown the artist his freshly-penned manuscript of Colombine, the poem had so impressed Lindsay that he promptly arranged for it to be published by Angus & Robertson; furthermore, in a gesture of great generosity toward his impoverished yet supremely gifted friend, Lindsay ensured that McCrae received the net profit from the sales of a de luxe edition of 20 copies that contained a fine, large Lindsay etching. The success of Colombine, the author’s second volume of poetry, cemented McCrae’s opinion of Lindsay as ‘the most generous man I have met in my life’ (Bloomfield, p. 56).

Published two years after Colombine, and containing five original etchings by Norman Lindsay, ‘Idyllia is a particularly fine example of small press publishing. One of the most dignified editions de luxe ever published in Australia….’ (Bloomfield, p. 59).

The author’s own copy of this highpoint in Australian private press.

Provenance: The McCrae family, by descent.