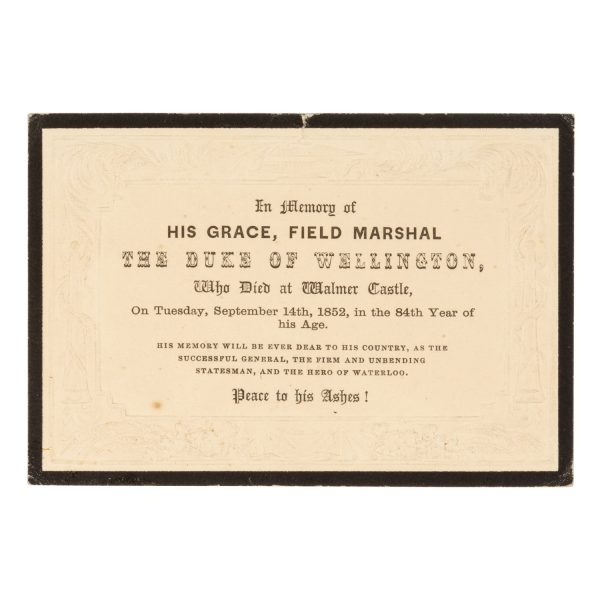 In Memoriam card for Field Marshal the Duke of Wellington, 1852.

[Great Britain : s.n., 1852]. Embossed card with black border, 80 x 115 mm, letterpress text: ‘In Memory of His Grace, Field Marshal the Duke of Wellington, who died at Walmer Castle, on Tuesday, September 14th, 1852, in the 84th Year of his Ahe. His memory will be ever dear to his country, as the successful General, the firm and unbending Statesman, and the Hero of Waterloo. Peace to his Ashes!’; verso blank; a tiny tear at top edge, otherwise in fine condition.

This In Memoriam or mourning card for the Duke of Wellington, issued anonymously at the time of his death, is a rare piece of mourning ephemera associated with one of Britain’s most celebrated military heroes.

We have not been able to trace another example of this particular In Memoriam card design in institutional collections.

Provenance: Lavinia Gibson (née Featherstone, 1823-1888) of Wiveliscombe, Somerset. Lavinia emigrated to Australia in 1855, and married Hugh Hamilton Gibson (1829-1911), owner of Glenample Station, Western Victoria, in Melbourne on 5 December 1855. In 1878 she became famous for her involvement in the aftermath of the Loch Ard shipwreck disaster, which occurred near Glenample. After her death in March 1888, this card passed into the possession of Lavinia’s sister-on-law, Annabella Helen Sloane (née Gibson, 1836-1920) of Mulwala Station, Southern New South Wales; thence by descent though the Sloane family.