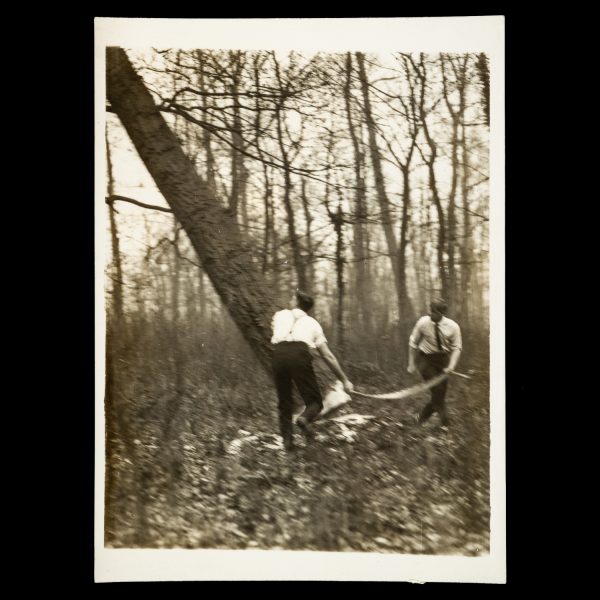 [London, U.K. : Daily Mirror, 1909 or 1910]. Two gelatin silver print photographs, 205 x 150 mm and 150 x 205 mm, respectively; versos with wet stamp of of the London Daily Mirror, and an identical caption label which reads: ‘Fine Fellers. Jackson and McLaren, world’s champion wood-cutters, felling trees on Lord Salisbury’s estate at Hatfield yesterday, the logs to be used in the ring at the Olympia Circus on Friday next.’; both prints are unmounted and in excellent condition.

“The Original Australian Woodcutters”, featuring Harry Jackson and Peter McLaren, were managed by Melburnian impresario Thomas Waddell Dougall. The troupe entertained English audiences in 1909-1910 with “a unique exhibition of Tree Felling and other Australian Bush Novelties”, and was billed as the only act of its kind in the world at that time. They also toured North America in 1908 and again in 1913-14. Later newspaper notices suggest they possibly remained in the States for the duration of the war and well into the 1920s. Axe Manual of Peter McLaren, America’s Champion Chopper (1929) was a pamphlet published by axe manufacturers Fayette R. Plumb Inc., of Philadelphia, who engaged Australian competitive “chopper” Peter McLaren to promote their products.

‘One of the most novel acts ever presented in a house of entertainment was that of the “Australian Woodcutters.” To obtain these it was necessary to send a personal representative into the interior of the Bush, find out the champion exponents of the art of wielding the axe, induce them to come to England. When this was finished, however, only half the difficulties were overcome. It was found impossible to reproduce the act of the Australian Backwoods in London without the actual timber upon which the men had been accustomed to work, and the extraordinary decision arrived at to get 2,000 tons of the Blue Gum Tree from the interior to the sea coast and then shipped to London. This act when it was eventually produced was an enormous attraction; the opening night being under the personal patronage of His Majesty’s Government, in the person of the Secretary of State for the Colonies, whilst everyone of the Agents General were present with their Officers, As a proof of the successful result of his tremendous venture, although the men were engaged for eight weeks, the engagement was extended from time to time until they ultimately completed an unbroken run of fifty-six weeks before returning to Australia.’ (ArthurLloyd.co.uk, The Music Hall and Theatre History Site Dedicated to Arthur Lloyd, 1839 – 1904, describing a programme for the Christmas 1909 performance at the London Hippodrome in which The Original Australian Woodcutters were the star attraction on the bill).