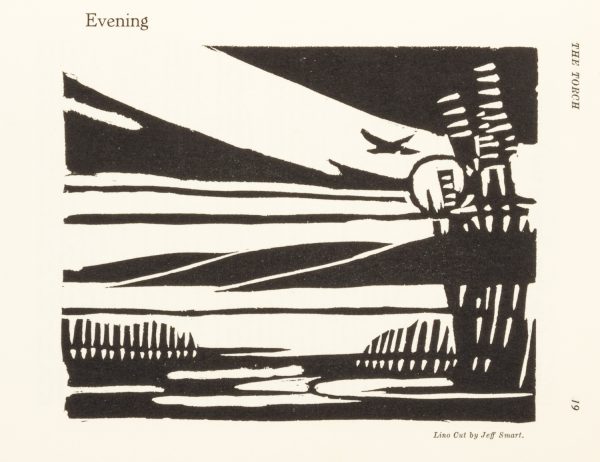 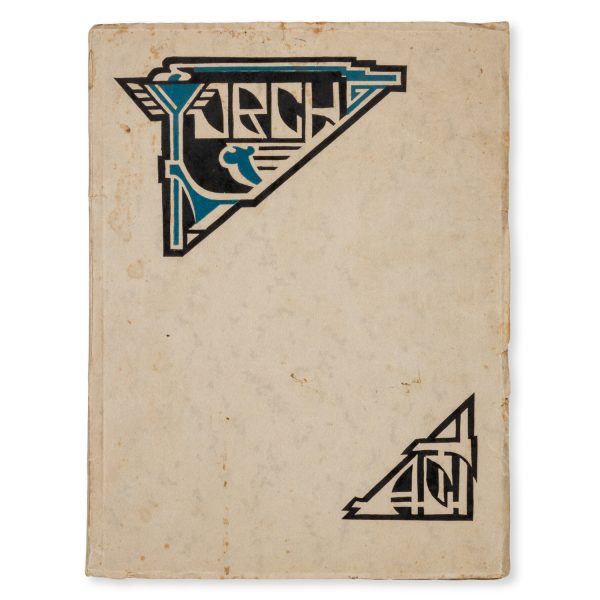 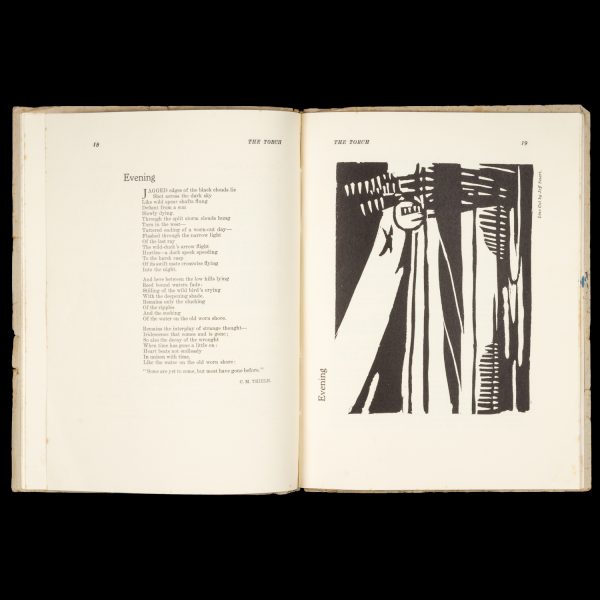 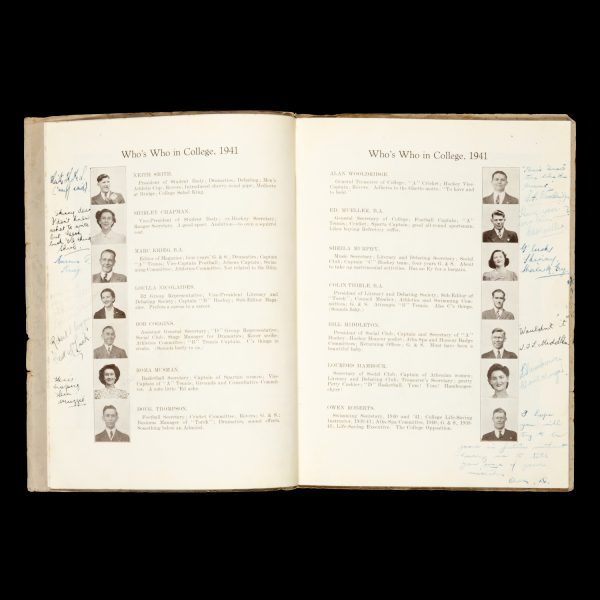 Full-page offset printed illustration, page 19 in: The Torch : Published annually by the Adelaide Teachers’ College. Vol. XXI, December, 1941. Adelaide : Printed at The Hassell Press, 1941. Small quarto, original textured paper wrappers with yapp edges (some light marks and edge wear), upper wrapper with design in blue and black; front free-endpaper with ownership signature of student M. Skinner dated 1941; pp 36, viii (advertisements), illustrated with 7 full-page reproductions of linocuts by College students Milton Hunkin (1), Ruth Mitchell (4), Rossley Coote (1), and – most significantly – final year student Jeff Smart (Jeffrey Smart, 1921-2013), whose work “Evening” reproduced on page 19 accompanies a poem with the same title by Colin Thiele on the facing page; with numerous sepia tone photographic plates of student sporting teams, and a double-page spread “Who’s Who in College, 1941” with 14 head-and-shoulder portraits of the institution’s most active students in terms of their contributions to campus activities (these include magazine editors Marcus Krieg, Colin Thiele, and Loullla Nicolaides, as well as Lourdes Hambour, Roma Musman, and Keith Smith); most of these students have signed their name in the margin beside their portrait, some with a pithy remark dedicated to “Skinny” Skinner; Smart is not among those photographed and did not sign Skinner’s copy – unsurprisingly, as he was not an enthusiastic member of the student body and would sometimes pay other students to sign the attendance book on his behalf, being far more interested in his studies at the South Australian School of Arts and Crafts, where he was enrolled concurrently. Fore-edges of leaves with spotting and a couple of ink marks, otherwise very clean throughout.

Inexplicably, the presence of the twenty-year-old student Jeff Smart’s linocut Evening in the December 1941 issue of The Torch appears to have been completely overlooked by the Australian art world. There is no mention of it in any of the major studies on the artist, and it appears never to have been reproduced in print. In fact, we can find not even a passing reference to its existence on the internet.

Although obviously in a different medium, Evening prefigures Smart’s later work through its use of space and stillness – hallmark elements of the artist’s developed painting style.