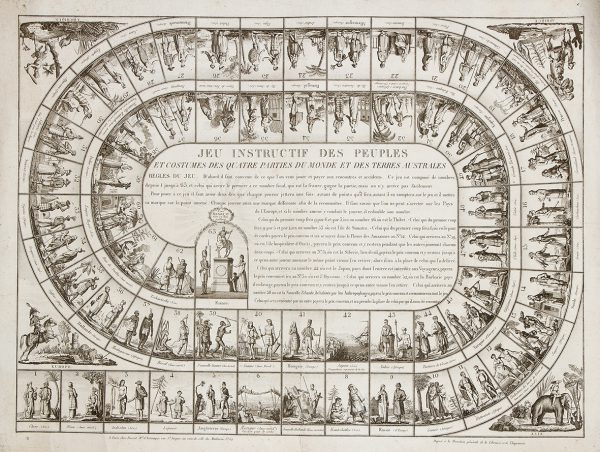 Paris : Chez Basset … rue St. Jacques … 1815. Copper engraving on thick laid paper, 490 x 650 mm, a game board in the form of a spiral track comprising 63 numbered cartouches with vignette illustrations of inhabitants of all regions of the globe, including representations of the native peoples of New Holland, Tahiti, New Guinea, the Moluccas, Sumatra, Java, and New Zealand, as well as of the Americas (Tierra del Fuego, Brazil, Chile, Guiana, Peru, Mexico, California, Iroquois, Nootka, Greenland … ), Asia (Tibet, Siam, China, Japan … ), Africa and Europe; the final space depicts a statue of Henry IV of France (dating the game to after the restoration of the Bourbon monarchy); the rules of the game are printed across the centre of the board; at the four corners are larger cartouches with motifs of Europe, Asia, Africa and the Americas; the game is of a type derived from the traditional jeu de l’oie (= game of the goose), a dice game with penalties and bonuses similar in concept to Snakes and ladders; some minor tears at the edges, a few closed with tape on the verso; else a clean, well preserved example.

A rare example of this early nineteenth century board game published by the Parisian engraver Paul-André Basset. The game is of particular significance for its depictions of Australian Aborigines, Māori and Tahitians, indigenous peoples of regions only relatively recently discovered and colonised by Europeans.

In an article on early French games that feature references to the South Seas, New Zealand academic R.D.J. Collins makes some pertinent observations about Jeu instructif des peuples et costumes: ‘The warmth of the Tahitian welcome, a commonplace since the publication of Bougainville’s account of his visit, is reflected here: all players who touch Tahiti must stay and miss two turns. New Zealand on the other hand has supplanted other realms as the most terrible land to visit, for the concomitant penalty is to recommence the game at square 1. The scene of the “Traveller about to be eaten by cannibals” is of dubious accuracy and probably owes more to literary accounts than to any visual document, but the Australian subject is on the contrary handled most convincingly, and may be derived from an illustration to Baudin’s voyage.’ (R.D.J. Collins. Games, Geese and Cannibals, pp 9-13 in: New Zealand Journal of Geography, October 1982).

OCLC records only one copy of this game (Cornell University Library); another example is held in the collection of the State Library of New South Wales.