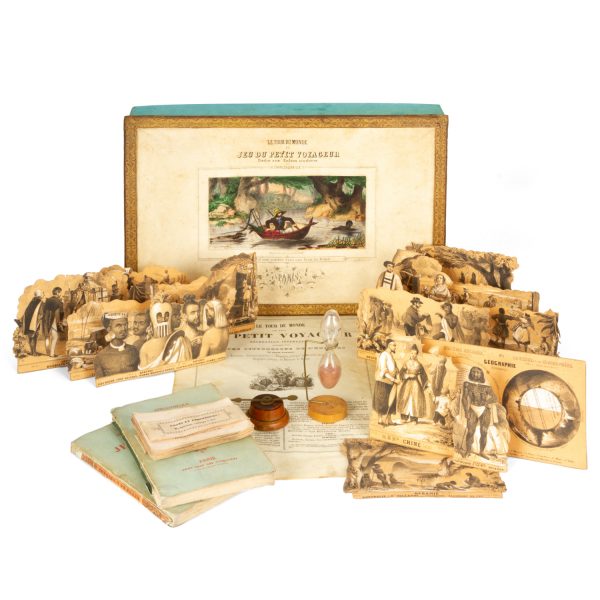 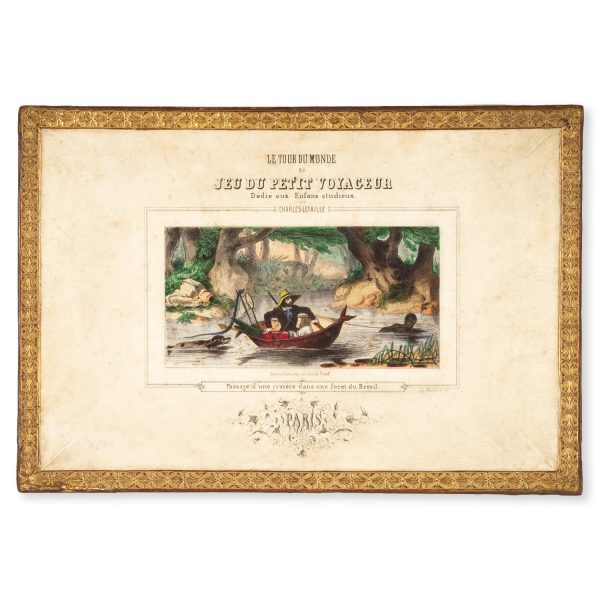 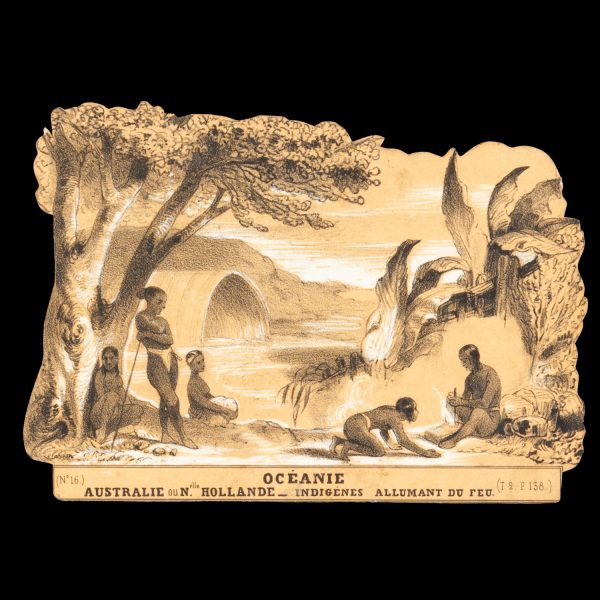 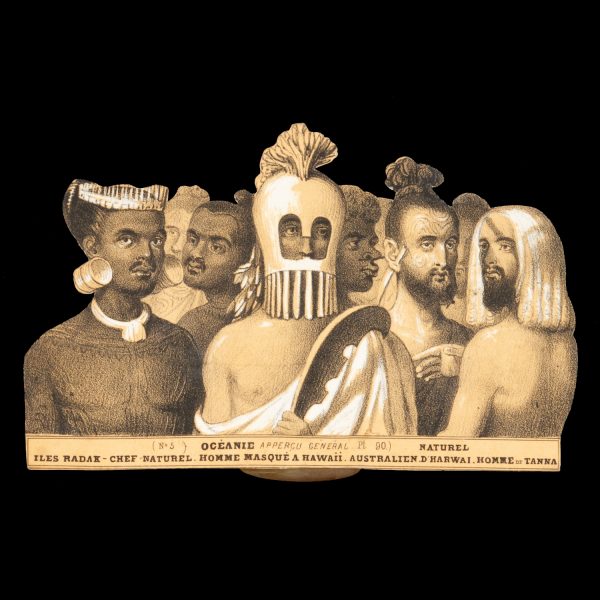 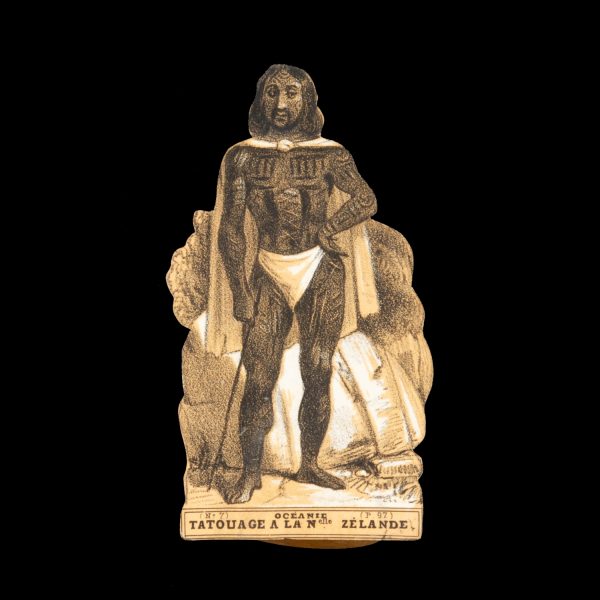 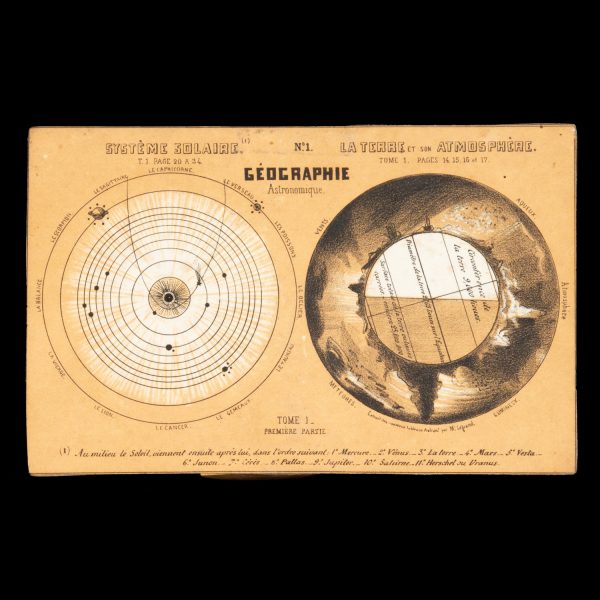 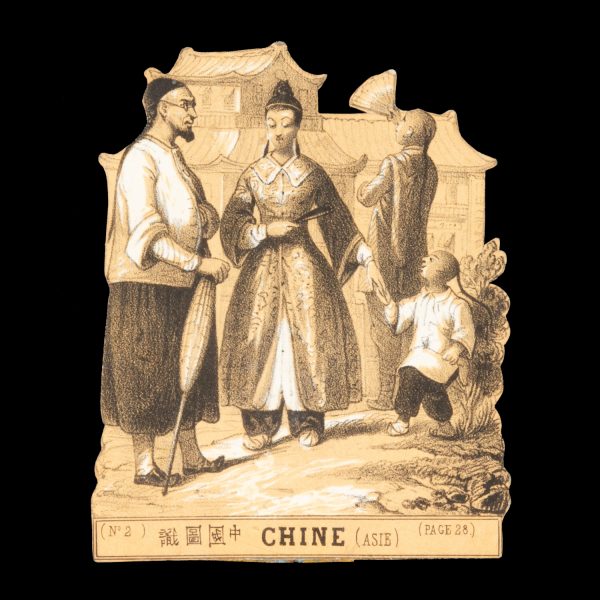 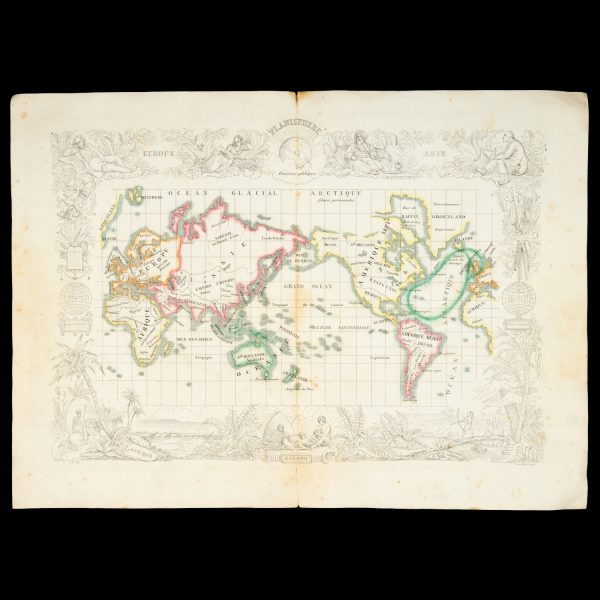 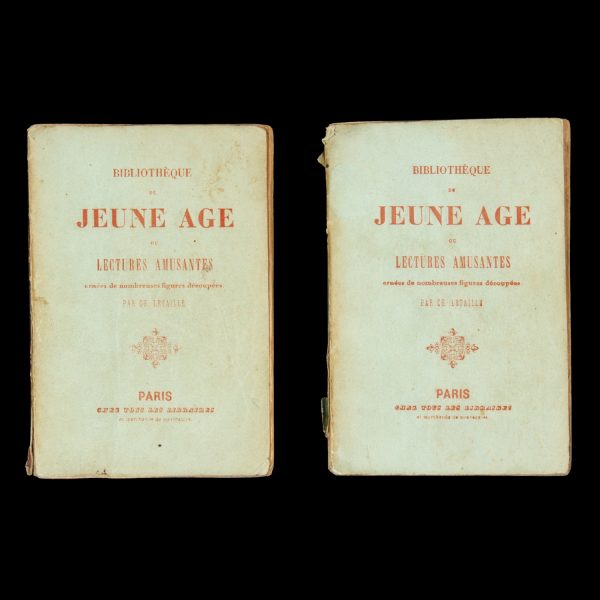 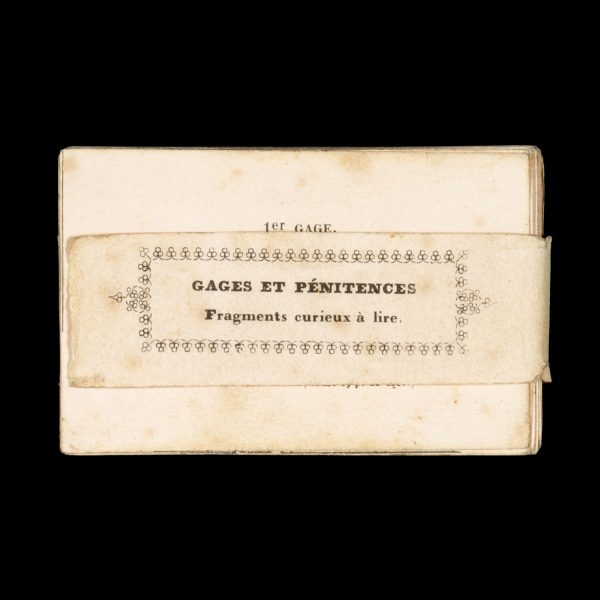 III. 19 (+1) lithographic cards in sepia, with small semi-circular wooden bases (designed to stand independently), depicting peoples of the world, including Aborigines of New Holland making fire; portraits of men of Hawaii, Ratak (Marshall Islands), and Tanna (New Hebrides); a tattooed Maori of New Zealand; Ombay cannibals of the Malay Archipelago; a graphic suttee scene in Hindustan; hunting wild elephants at Kabul; a Chinese family; a caravan in the Sahara; a Native American family in Canada, a plantation in French Guiana, and several European ethnic types (five cards lacking the base, else fine);

IV. a copper arrow (serving as a compass needle) mounted on a wooden base

The game’s creator and publisher, Charles Letaille, devised several games and wrote a number of works for juvenile audiences on geography, history and exploration. Among the latter were Tableau abrégé de l’histoire des voyages, ou Fragments les plus curieux des voyages récemment faits dans l’Asie, l’Afrique, l’Amérique et l’Océanie (NLA; SLNSW; SLSA), which was issued in a small number of different editions between 1839 and 1846. The seven die-cut lithographic illustrations in that work, which were based on those made by Arago on Freycinet’s round-the-world voyage in the Uranie (1817-1820), appear to have been used again by Letaille in his game, Le tour du monde, ou Jeu du petit voyageur – although the game, which is by its very nature a highly pictorial publication, is more extensively illustrated than the book. The depictions based on Arago’s pictures include the striking images of the masked man of Hawaii and the tattooed Maori, while the image of the cannibals of Ombai (at the eastern end of the Indonesian archipelago) being offered a mirror and trinkets is an apparent conflation of an Arago drawing made at Shark Bay (Western Australia) and one of Sainson’s illustrations from Dumont d’Urville’s voyage in the Astrolabe (1826-1829), which depicts a similar scene.

The game is played using the lithographed cards mounted on bases. Twenty-three cards are called for, with scenes representing Europe (9), Asia (4), Africa (2), The Americas (4), and Oceania (4). (The example of the game offered here lacks one of the cards from each of Europe, Asia, Africa and Oceania, but has an additional card with diagrams of the solar system and the earth’s atmosphere). The cards are to be arranged in a circle around the the world map, with the copper arrow placed at the centre; the first player to take a turn spins the arrow and if they are not able to accurately locate on the map – within the time permitted by  the sand timer – the region on the card which the arrow is pointing to, they must take a penalty card and are compelled to read aloud to the other players a relevant passage in the two-volume Revue de l’Univers.

A rare deluxe version, with hand-coloured cards on copper (rather than wooden) bases, was also issued. However, this standard version, with sepia cards, remains extremely scarce and desirable, even with the loss of a small number of the cards (see above).