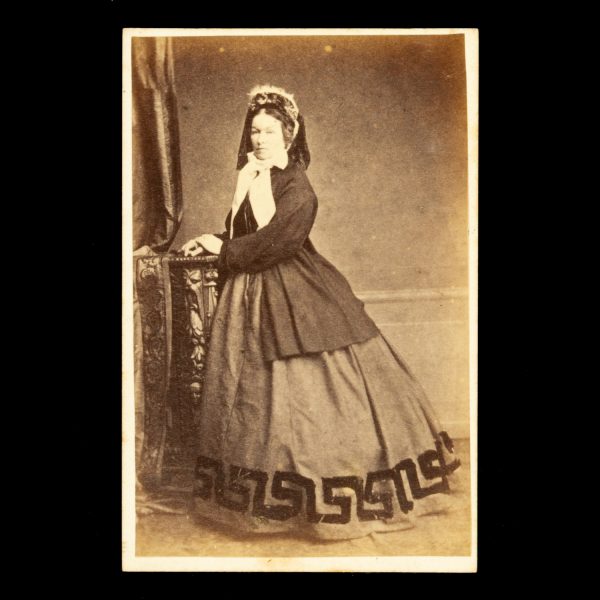 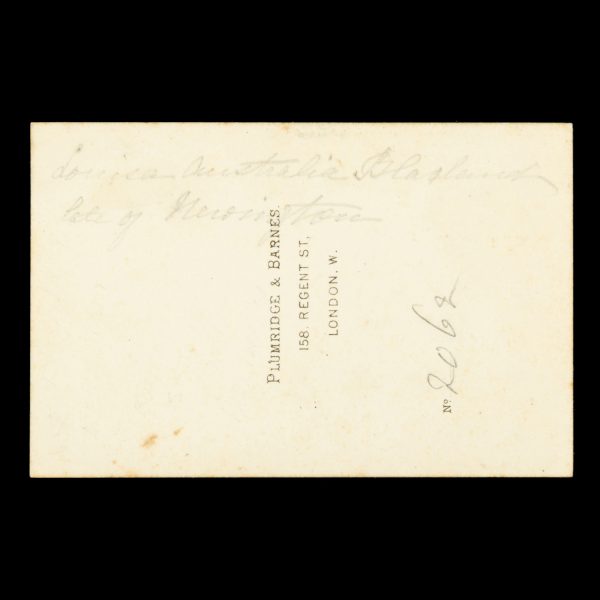 Possibly the only surviving photographic portrait of Louisa Australia Blaxland (1807-1888), daughter of explorer John Blaxland. It was taken during her visit to England in 1863, soon after the Blaxland family home, Newington House, had been sold by her brother Edward. (Newington became the first home of Newington College, which opened its doors in July, 1863; much later, it would become part of the Silverwater Correctional Complex).

‘A member of the aristocratic Blaxland family, Louise Australia was the sixth of 11 children, acquiring her middle name as the first ‘native’ born child after her parents emigration. Despite being encouraged to sketch by her mother, none of her drawings survive, indeed Blaxland is best known for her unsuccessful petition to have Newington, her family home at Parramatta, turned into a public memorial.

[Louisa, a] sketcher, acquired her middle name by being native born – at the Blaxland family home, Newington, Parramatta, on 22 May 1807, soon after her parents, John and Harriott Blaxland, had arrived in New South Wales. She was the sixth of 11 children. Mrs Blaxland encouraged all six daughters to collect and sketch flowers. Emily Manning recorded one of these sketching excursions taken in the company of Louisa and her sister Jane when she stayed at Newington in 1837. Louisa Blaxland never married. Her role in life was to remain at Newington and look after her parents. In 1863, well after both had died, she made her first visit to Britain, Newington having been sold the previous year by her brother Edward, who had inherited the property when their mother died. Louisa regretted the loss of her family home all her life and in 1880 petitioned the New South Wales government to turn it into a public memorial to her father. Instead, it was later renamed Silverwater and converted into a minimum security prison under the control of the New South Wales Department of Corrective Services.

Louisa Blaxland died at Parramatta on 2 August 1888. Some of her letters and her record of John Blaxland’s dying reminiscences of his early life survive in the Blaxland family papers (ML). No extant drawings have been identified.’