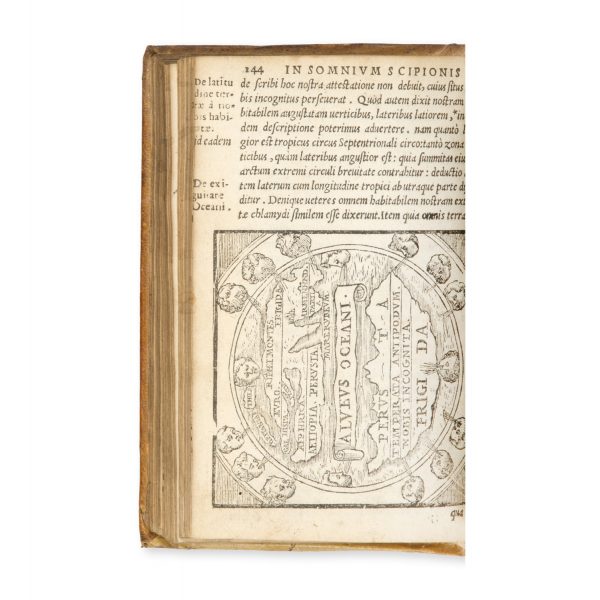 A late sixteenth-century edition of the Roman fifth-century writer Macrobius’ hugely influential commentary on Cicero’s In somnium Scipionis (The dream of Scipio), published in Venice by Ioannis Gryphius (Giovanni Griffio the Elder, c.1518-c.1576). Cicero’s work, the sixth book of De re publica, describes a vision experienced by the Roman general Scipio Aemilianus, which he is supposed to have had immediately prior to the destruction of Carthage in 146 B.C..

The commentary of Macrobius, in essence a philosophical discourse on the nature of the cosmos which promotes the paradigm of a spherical earth, first appeared in print in Venice in 1472. However, the 1483 Brescia edition was the first to contain Macrobius’ world map, one of the earliest printed maps to depict the world as a globe. This map, retained in subsequent editions (including this 1574 Venice edition) is also of immense importance because it shows the hypothetical Antipodes – Terra Australis Incognita. The existence of such a landmass was posited by Macrobius on the basis that it provided the earth with equilibrium, acting as a counterbalance to the known northern landmass. The worldview of Macrobius stands alongside that of the second century Greek geographer Ptolemy – whose ideas were lost to the West until the Renaissance – as the most influential for cartography and geography prior to the Age of Discovery.

The printer, Giovanni Griffio the Elder, was a member of the Gryphe publishing family, one of the best known dynasties of printers and publishers in Europe in the sixteenth-century. The Gryphe publishing house was originally established in Germany, moving later to Paris, Lyon, and eventually settling in Venice in approximately 1544. Griffio the Elder was active from 1545 to 1576 in Venice. He stopped printing in 1576, and it is reasonable to assume that he died in the same year, possibly because of the plague that decimated a quarter of the population of Venice between 1575 and 1577. (Washington University in St. Louis)

The 1574 Ioannis Gryphius edition of Macrobius’ In Somnium Scipionis is unrecorded in Australian collections. An appealing copy in a contemporary binding.