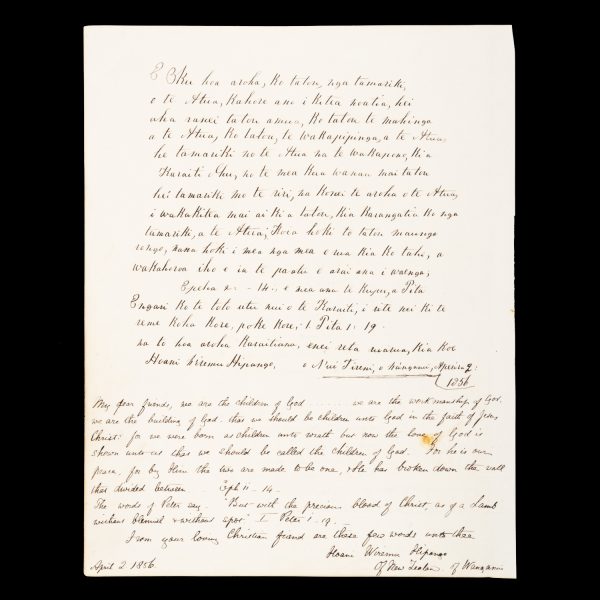 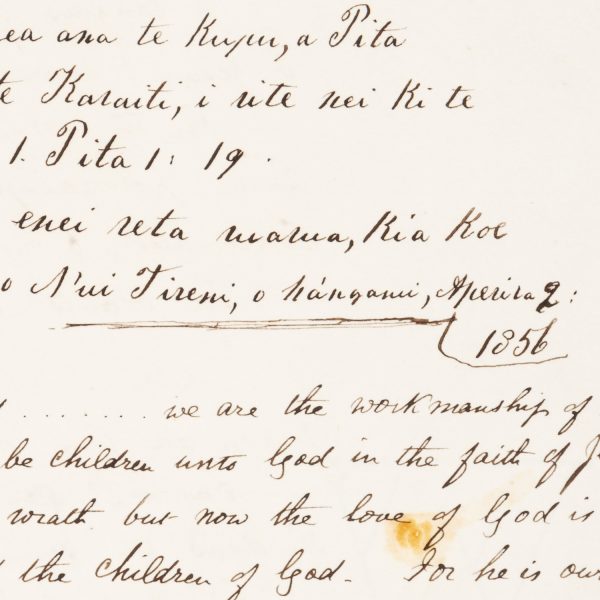 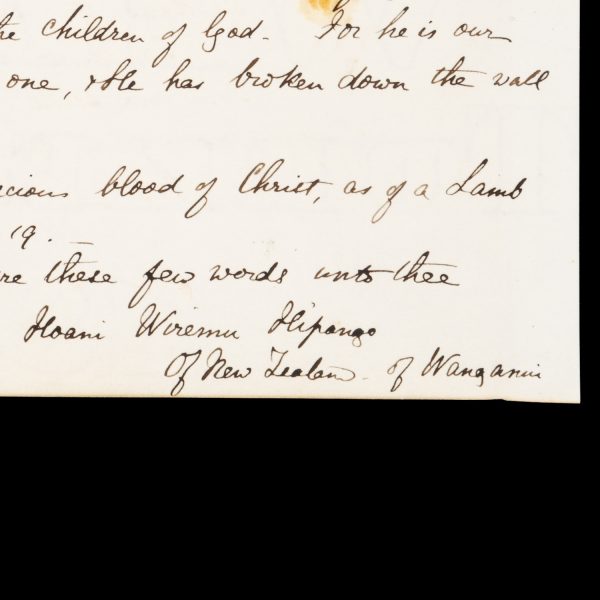 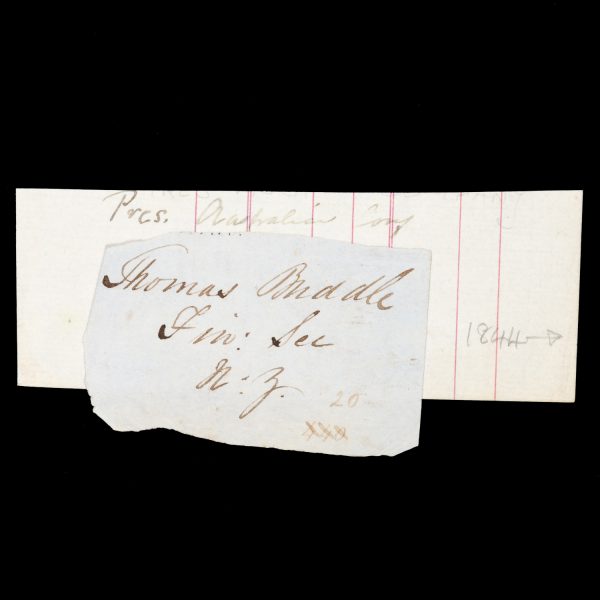 Single quarto sheet (280 x 220 mm) of high-quality handmade Whatman paper with watermarked date 1853, recto with 16-line manuscript in ink in Māori in the hand of Hoani Hīpango Wiremu, followed by his own English translation of the above; the first text is signed Hoani Wiremu Hipango, o Nui Tireni, o Wanganui, Aperila 2. 1856 and the translation is signed Hoani Wiremu Hipango, of New Zealand, of Wanganui, April 2. 1856; Hīpango evidently wrote these lines on a page in a commonplace album belonging to an unidentified person he met shortly before the end of his sojourn in England with the CMS missionary Richard Taylor in 1855-56; his message takes the form of a greeting to fellow Christians and includes two Biblical quotes (Ephesians 2:14 and 1 Peter 2:19); it opens with the words ‘My dear friends, we are the children of God’ and closes with ‘From your loving Christian friend are these few words unto thee….’; verso with an unrelated poem in French signed and dated ‘P. P. R. June 1855’; the sheet has never been folded and is in an extremely well preserved state; [accompanied by] the individual cut signature of Wesleyan missionary Thomas Buddle (1812-1883), active in New Zealand 1840-1883.

Unique, unpublished manuscript in the hand of Hoani Hīpango Wiremu, written in England at the end of his 1855-56 visit to that country with the New Zealand CMS missionary, Rev. Richard Taylor.

‘Hīpango was a leader of Ngāti Tumango, of Te Āti Haunui-a-Pāpārangi. He is thought to have been born about 1820. At his baptism his parent was named as Te Heke. Another source suggests that his father was called Whakakati. His mother’s name was Oneone. He had a sister, Tarete, who married Te Māwae of Ngāti Ruakā. Hīpango married Rāwinia Rere on 2 September 1841, at Pūtiki Wharanui, near the mouth of the Whanganui River. They are known to have had nine children.

Hīpango was described by the missionary Richard Taylor as the most influential Whanganui leader in the 1840s–1860s. His mana over tribal lands extended some 70 miles up the Whanganui River. He was one of the first Whanganui Māori to adopt the Christian faith. He was baptised by John Mason at Pūtiki on 6 June 1841, and took the name Hoani Wiremu (John Williams). He became a teacher of Christianity, and in the late 1850s entered St Stephen’s School in Auckland to study for ordination. However, his eyesight deteriorated from reading by candle-light, and he was forced to abandon his desire to enter the ministry.

In 1846 Hīpango provided men to defend the township of Whanganui, under threat from hostile Taupō and upper Whanganui Māori, until the arrival of government troops. In April the following year, with five others, he captured six young Māori who had killed members of the family of Whanganui settler J. A. Gilfillan. In recognition of this act he was awarded a pension by Governor George Grey. He was later appointed an assessor, under the Native Circuit Courts Act 1858.

Hīpango was chosen by a meeting of Whanganui and Rangitikei leaders to accompany Richard Taylor on a visit to England in 1855. Leaving in January, they travelled via Sydney, where Hīpango visited the home of Samuel Marsden at Parramatta. In London he had an audience with Queen Victoria and Prince Albert, and presented them with gifts from the Whanganui tribes. Taylor records that Hīpango was shocked to see open violations of the sabbath in London. While there, he also accompanied Taylor at a Māori service held for a group of Māori sailors. On their return to New Zealand in 1856 Taylor and Hīpango tried unsuccessfully to mediate between warring Taranaki tribes.

Hīpango was among the Whanganui leaders who opposed the Pai Mārire movement in the early 1860s. On 14 May 1864 at Moutoa, an island between Hiruharama (Jerusalem) and Rānana on the Whanganui River, lower Whanganui Māori defeated an upper Whanganui Hauhau force. Hīpango led the force which pursued the retreating Hauhau warriors. Fighting continued, and both sides fortified positions near Hiruharama. On several occasions when Hauhau warriors were captured, Hīpango instructed that they be released unharmed, for he did not wish to shed the first blood. However, he opposed attempting to negotiate a peace, and gained the leadership of the pro-government Māori by insisting on a military resolution.

In February 1865 Hīpango led the attack on Ōhoutahi, the main Hauhau pā, below Pipiriki. The pā was captured, but Hīpango was fatally wounded. He died two days later, on 25 February, at Pūtiki; he was thought to be aged about 45. He was accorded full military honours at his funeral on 27 February, and was buried at Korokata hill, overlooking Pūtiki. A wooden obelisk was erected there to his memory by the provincial government.’ – Steven Oliver. ‘Hīpango, Hoani Wiremu’, Dictionary of New Zealand Biography, first published in 1990. Te Ara – the Encyclopedia of New Zealand, https://teara.govt.nz/en/biographies/1h24/hipango-hoani-wiremu (accessed 23 March 2021)