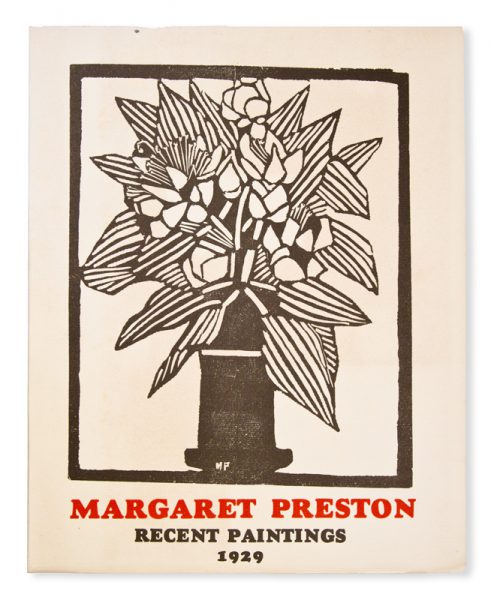 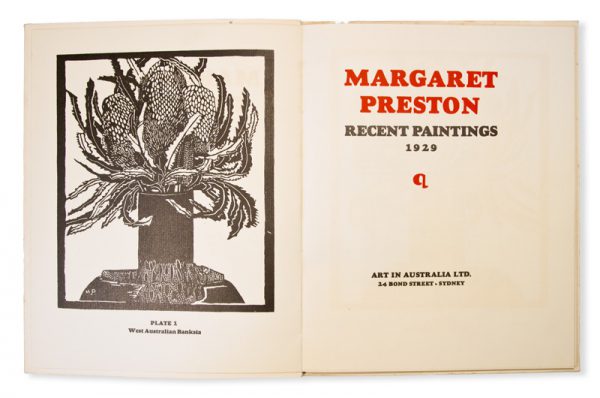 1. A black card folio, inside which is a copy of the publication ‘Margaret Preston Recent Paintings 1929’ quarto, illustrated wrappers, pp. [42], printed in red and black, nine black and white plates numbered 1 to 9, foreword by Leon Gellert and Sydney Ure Smith, text titled 92 aphorisms by Margaret Preston and others limited to 250 numbered copies, printed by Percy Green at the Green Press, Sydney, pale foxing, very good.

2. Thirteen folded cards numbered plates 10 to 23, each with a colour reproduction of Margaret Preston paintings

5. Cutting from a card with a reproduction of a Margaret Preston woodcut of Sydney Harbour Bridge

6. Printer’s finely printed prospectus from Bacon & Company, folded card with a tipped-in Margaret Preston reproduction, advertising their printing of the plates in this edition (rare, and not issued with the folio)

This rare and exquisite deluxe folio, produced at the height of Preston’s popularity, was originally issued with one of two woodcuts, ‘Mosman Bridge’ (Butler 113), or ‘Flowers in Jug’ (Butler 137). It is assumed that each were printed in an edition of 125, but ‘it is not known if the full edition was completed’ (Butler, p. 137). Of the copies which were completed, most have now been split for the original woodcut and colour plates, this folio lacking the woodcut and one of the reproductions.

One of the rarest and most sought after publications on an Australian female artist, a lavish publication from the art deco era.