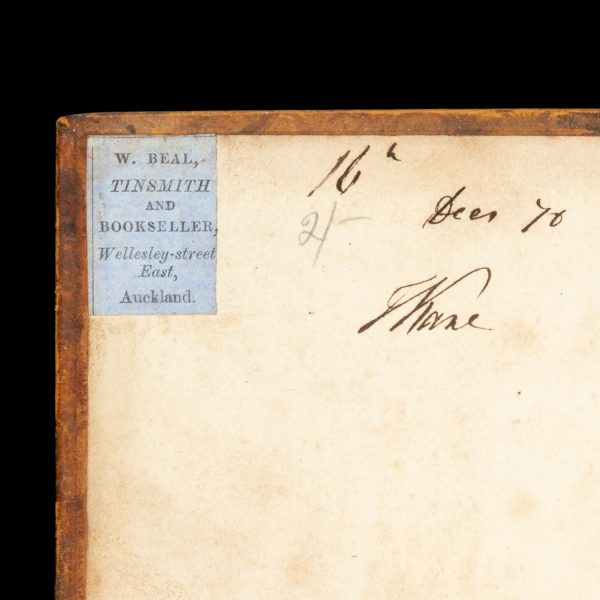 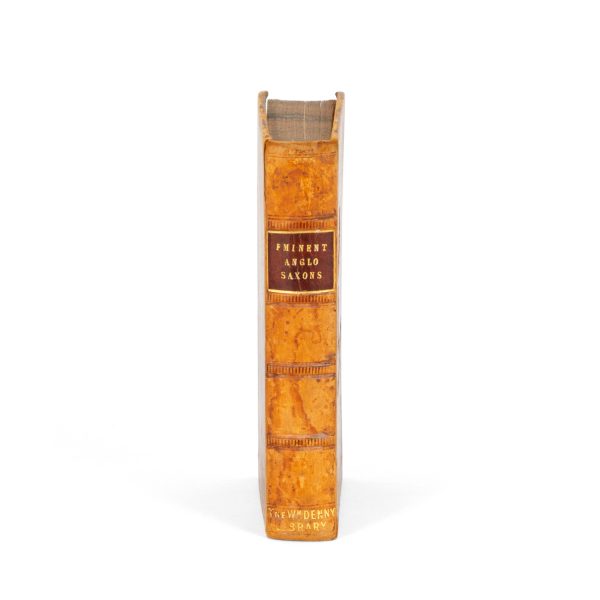 [MARITIME BINDING] Lives of Eminent Anglo-Saxons; illustrating the dawn of Christianity and civilization in Great Britain. Part I [& II].

London : The Religious Tract Society, [circa 1850]. Two volumes in one, duodecimo (145 x 95 mm), in a special ship’s binding of gilt-ruled calf, the upper board with gilt-stamped pictorial device and below the ship’s name ‘S.S. William Denny’, the spine in compartments with contrasting leather title piece lettered in gilt and with ‘The Wm. Denny Library’ stamped in gilt at the foot; marbled edges; front pastedown with bookseller’s ticket of ‘W. Beal, Tinsmith and Bookseller, Wellesley-street East, Auckland’; pastedown and front free-endpaper with ownership inscriptions of ‘T. Kane Decr 1870’ and ‘F. Cherry, Newton [Auckland] 339-1871’, pp 192; 192; rear pastedown with Cherry’s manuscript date of 5.12.71, and the remnants of the binder’s ticket, printed in red on white but of which only the following letters can be discerned: ‘[????]ART / [BOOKBIND]ER / [????]LEY‘; the boards are lightly rubbed and with some minor scuff marks, but the gilt is still bright; the binding is firm, and the contents clean.

The cargo and passenger ship SS William Denny was wrecked off New Zealand’s North Cape in March 1857, on a voyage from Auckland to Sydney. This beautiful little volume, in the ship’s own attractive binding (frustratingly, we cannot identify the binder from his only partially legible ticket), was evidently salvaged from the wreck at the time; whether or not it is a unique survivor is not known. The book was later sold by William Beal, Auckland tinsmith (!) and bookseller, to Mr. T. Kane, before passing a year later into the private collection of another Aucklander, F. Cherry of Newton, as the 339th volume in his library.