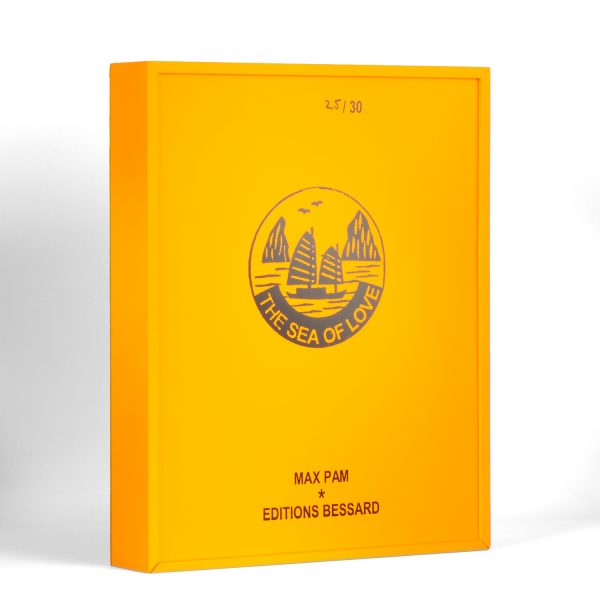 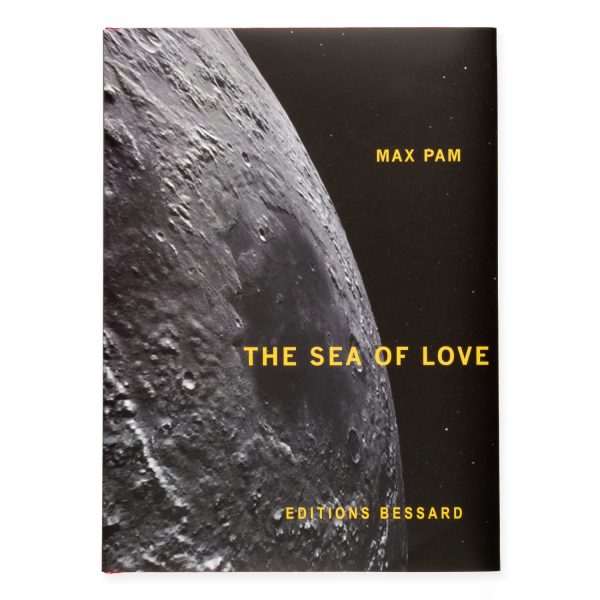 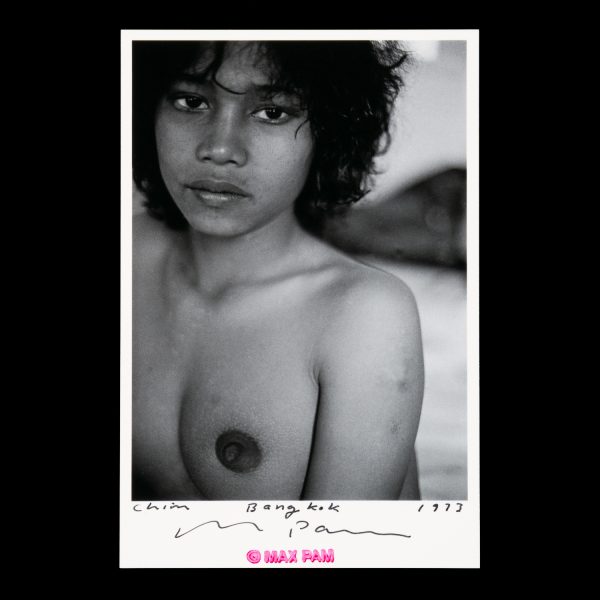 This is the deluxe edition (or as the publisher describes it, the Artist’s Edition), housed in an orange felt lined wooden box with sliding lid, issued in two variants each limited to 30 copies, with an additional large format (255 x 325 mm) signed photograph. The two variant photographs are a female nude ‘Kanita, Bangkok, 1973’ and a streetscape ‘Papier mache Mercedes, Bangkok, 1976’. Each deluxe edition contains the small format photograph ‘Chim’ as well as the additional larger photograph.

This variant of the deluxe edition contains the photograph ‘Kanita, Bangkok, 1973’.

Max Pam was born in Melbourne in 1949, and since the late sixties has lived and worked in Asia, Europe, the Middle East and East Africa, documenting the people and cultured he has encountered during his career. His work has been published in several monographs and journal articles, and his exhibition prints are held in a number of private collections.

His major exhibitions to date include :

“Max said: ‘The Sea of Love is a book that samples the cultures I have lived in over the decades. Its also a book that samples the way I work, how that work has evolved and how processes of obsessive behaviour have been compressed into research via the device of the book. Its also a book that interrogates the human condition, desire, family, territorial peculiarity and otherness. The opening chapter is reflective of the brutal “you can only worship me, you cannot leave me” love the populist despot offers an entire population enforcing loyalty to Big Brother through fear, buttressed through a massive apparatus of security and repression, as well as systematic brainwashing.

The following chapter riffs off an open ended love obsession with Francisco da Goya’s La Maja. His depiction of her is a sea of love. The first time I saw her in the flesh, at the Prado Museum, I stood in front of her for hours, swimming through her, around her, longing for the impossible catharsis of requited love to break over me. Each chapter needed to reflect the love narrative in my life driven as it is by diverse, impossible to anticipate contingencies. This career of mapping emotion as a photographic process has been on a long slow burn, muted or sensitised by shifts in geography and body chemistry with flexing seasonal spikes that are as unpredictable as they are endless. It took me years to ride this lovely dragon in a way that made any sense at all other than the raw first thought best thought addiction I had to that kind of life. ‘” – the publisher.

An exquisite photobook by Max Pam and Pierre Bessard.