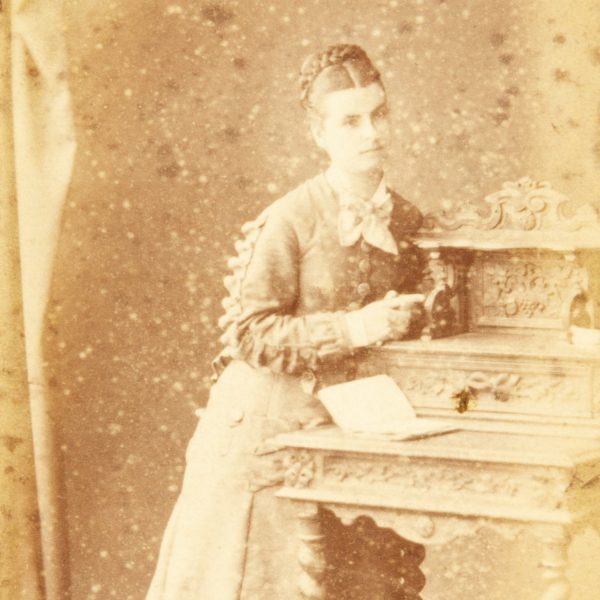 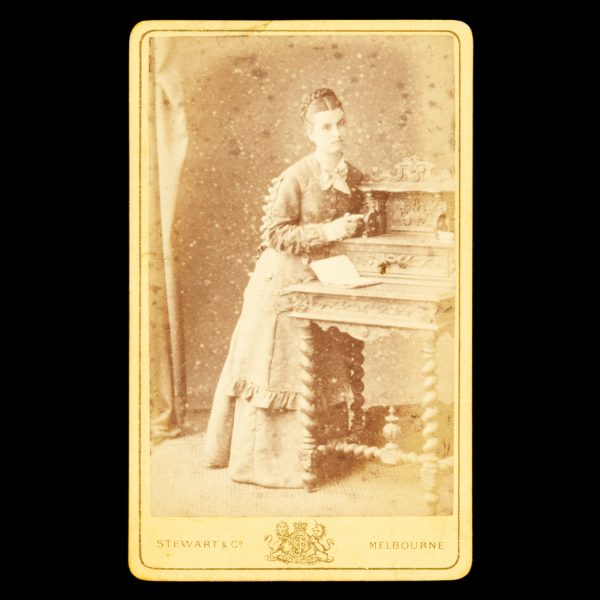 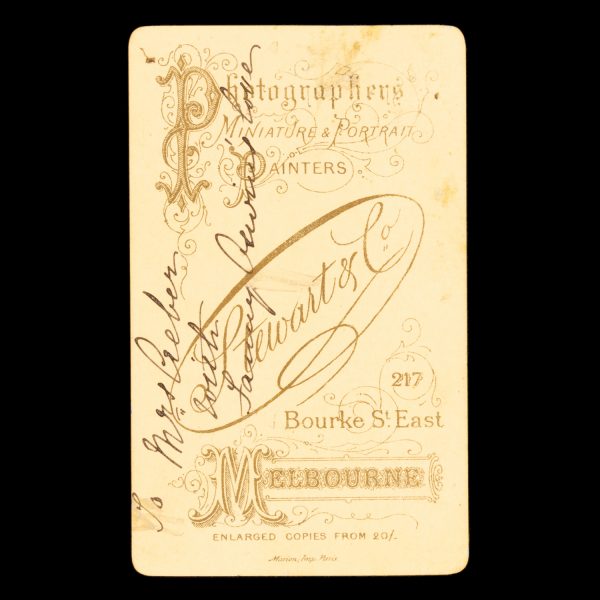 Albumen print photograph, carte de visite format, 103 x 63 mm (mount); verso imprinted in gold ‘Stewart & Co., 217 Bourke Street East, Melbourne’, and inscribed by the sitter in ink ‘Mrs. Creber, with Fanny Oswin’s love’; the print has some mottling in the negative and a couple of tiny marks, but is otherwise in very good condition, as is the mount,

This carte de visite portrait of Fanny Elizabeth Oswin (1857-1937) was taken in the Bourke Street studio of Stewart & Co., probably around 1875, when she was about 18 years old. (Note that the dates given by Davies & Stanbury for Stewart & Co. at this address – 1879-1891 – are wildly inaccurate, as the studio was operating at these premises as early as 1871). We have not been able to firmly establish who her friend or acquaintance Mrs. Creber was, but it is possible she was related to the Ballarat architect Walter Creber.

Fanny died a spinster in Drouin, West Gippsland. The following report on her funeral appeared in The Age on 11 June 1937, and it explains her connection with the Kew district of Melbourne:

‘Memories of early Melbourne were revived yesterday with the burial of Miss Fanny Elizabeth Oswin, member of a pioneer family of Kew district, at an old secluded burial ground in St. James’s-road, Heidelberg. Originally known as the Warringal Cemetery, this old burial place was established in the early fifties of last century by several families of settlers along the Yarra Valley beyond Dlght’s Falls. One of these was Mr. William Oswin owner of Kilby Estate, Kew. Transport over the rough roads and waggon tracks between Melboume and the outer settlements at that period made travelling arduous and slow, and funerals from Heidelberg and northern Kew districts to Melbourne Cemetery involved considerable trouble and loss of time. Accordingly Mr. Oswin joined with four other settlers in the locality on both sides of the Yarra — Messrs. Nuttall, Wadeson, Wipple and Gale— in purchasing a block of land on one of the hills of Heidelberg for a burial ground for their families. Numerous members of their families were buried there in succeeding years. Mr. Oswin himself, the last of the original trustees of the cemetery, was burled there about forty years ago, and his son was interred in the same ground twenty-three years ago. Subsequently the ground was taken over by Heidelberg council, and no further burials took place there until yesterday, when Miss Oswin was buried in one of the family graves that had not been opened for 83 years. It will probably be the last burial in the old cemetery. The service was conducted by Rev. A. E. P. Young, of St. John’s Church of England, Heidelberg, and the funeral arrangements wore carried out by A. W. Padbury and Co., of Kew. Amongst those who attended were Mr. A. Littlefield, a son-in-law of the late Mr. William Oswin, and Mr. Littlefield, Jun., grandson. The old burial ground is situated in a wilderness of tall trees and shrubs on the northern outskirts of Heidelberg, a short distance from the present Heidelberg Cemetery. Most of the graves are hidden by bushes and overhanging foliage from the trees, but their spiked iron fences and mossy headstones are visible in places from the neighboring roads, and the lettering on the oldest stones is still readable, notwithstanding the passing of eighty odd years.’