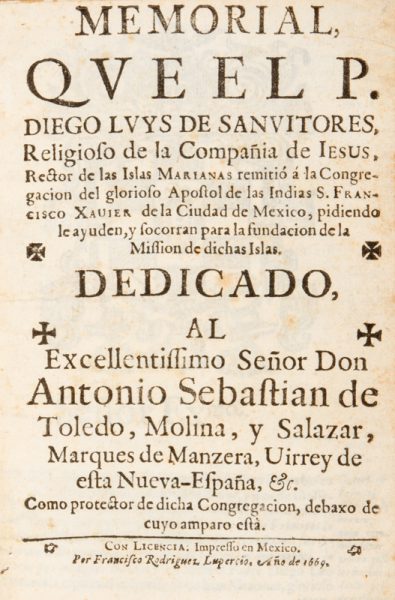 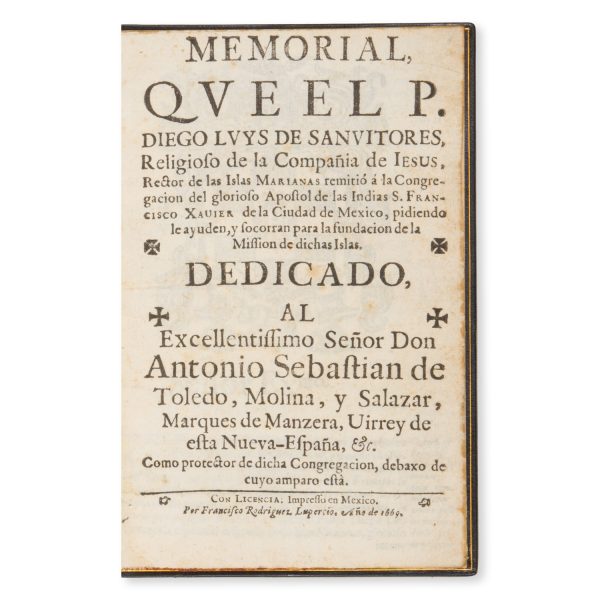 An important Memorial published in Mexico in the seventeenth century, containing the outline of a plan for the possible Spanish colonization of Australia and the religious conversion of its inhabitants. Rarely offered for sale, San Vitores’ Memorial is unique in its petitions to extend Jesuit activities from the fringes of East Asia south toward an entirely unknown Terra Australis.

Father San Vitores was one of the pioneer Spanish missionaries in the Mariana Islands, which lie directly to the north of the island of New Guinea in the northwest Pacific. He was martyred on the island of Guam in 1672. In his Memorial, dedicated to the Viceroy of New Spain, patron of the Jesuit congregation in Mexico, San Vitores urges the Jesuits in Mexico to establish a mission in the Marianas – not as an end in itself, but because it would create a base from which the colonization and ultimate conversion of Terra Australis might be carried out. San Vitores’ report was carried back to Mexico on the first galleon to visit him on Guam after his arrival there.

The Memorial is divided into nine main parts. The first section (43 pp) is concerned with an explication of the advantages that a mission in the Marianas would afford the Spanish in any attempt to colonize the “Southern or Austral Islands”. The second section provides a general description of the various islands in the Marianas. The third section gives an account of the failed expedition to the Solomon Islands in 1595 of Alvaro de Mendana de Neyra (for which Quirós served as chief-pilot).

In the fourth section (8 pp), in support of his own argument, San Vitores appends the text of the eighth Memorial written by the explorer Pedro Fernandez de Quirós to Philip III of Spain in 1610, On the Colonization and Discovery of the fourth part of the World, Unknown Australia, its wealth and fertility, in which Quirós makes the following observation: ‘… the unknown land of Australia comprises one quarter of the globe’s territory, inhabited by poor uncivilized heathen, without king or law, and free from the stumbling-blocks which have been placed in the path of our faith in other countries by the tyranny of Princes, the greed and craft of Indian Chiefs or Priests, the infernal sect of Mahomet, and diabolical superstition of idolatry and witchcraft; free, too, from the vices common to other peoples.’ Quirós’ eighth Memorial is an impassioned plea for him to be allowed to lead another expedition in search of Australia. As Maggs Bros. point out in their catalogue 491 (1927), this Quirós Memorial ‘forms one of the most valuable and historical documents for the early history of the quest for the discovery of Australia.’

The fifth section of the San Vitores Memorial puts forward a case for the conversion of the Ladrone Islands (Marianas) being treated as a matter of urgency. The sixth section makes a practical proposal for the establishment of such a mission, while the seventh provides an alternative to this proposal. The eighth section includes the text of Father San Vitores’ first letter sent from the island of Guam, dated 18 June 1668 (which accompanied his Memorial back to Mexico), and the final section quotes a letter from a missionary who accompanied San Vitores to the Marianas.