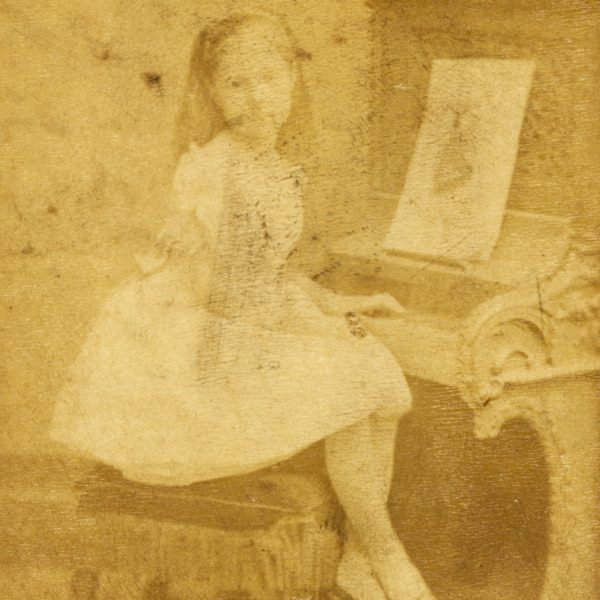 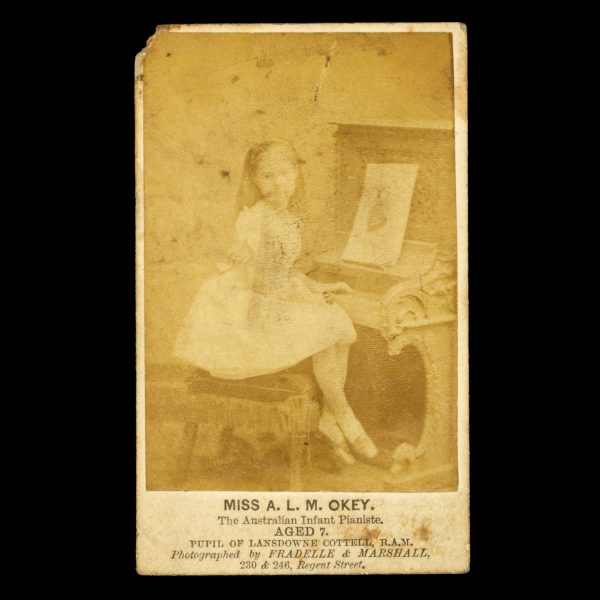 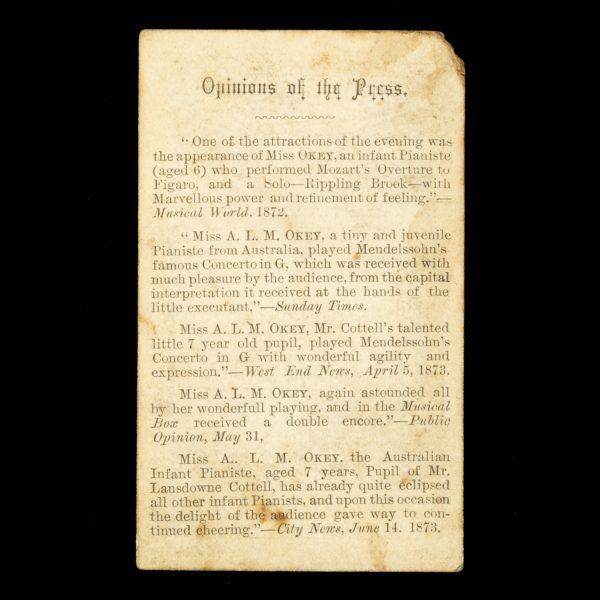 A rare photographic portrait of child musical prodigy Anna Louisa Margaret Okey, who was born in Pipeclay (now Eurunderee), near Mudgee, New South Wales in 1864. Anna went on to achieve fame in Europe as a concert pianist. Her first husband was the Russian pianist Vladimir de Pachmann, and she is better known by her later stage and married name, Marguerite (or Maggie) de Pachmann.

‘Australia has produced many artists of international standing. Here is the story of a remarkable life journey that begins on the Pipeclay goldfields in the 1860s and ends up on the concert platforms of Europe and America.

In 1863 John and George Wurth found gold in Golden Gully in New Pipeclay (later renamed Eurunderee). Miners and gold seekers flocked to the area and spread across to Pipeclay, a small area approximately between what are now Henry Lawson Drive and Cassilis Road and including Pipeclay Creek.

With the arrival of the gold seekers stores and shanties sprung up to provide for their needs.

Enter William Okey and his wife Anna Maria. They were married at Burburgate (on the Namoi River) on January 4, 1864. William was a bachelor aged 27 whose occupation was shown as ‘comedian’ and Anna Maria a widow aged 17 (former name Blade).

On December 14, 1864, at Pipeclay, William and Anna’s first child was born. She was named Anna Louisa Margaret. The witnesses at her birth (registered by her father at Mudgee on January 16, 1865) were W. Ramsay MD and a Mrs Hogan (probably a midwife) indicating the birth was at home.

Home, in this instance would be either a tent or slab and bark hut similar to Henry Albury’s slab inn bought in 1864 at New Pipeclay. This same year Peter Lawson arrived on the New Pipeclay diggings, builds a slab hut, meets Henry’s daughter, Louisa, and marries her in 1866.

Anna Okey’s birth certificate records some other interesting details. William Okey is now shown as an ‘innkeeper’, aged 28, born in London. Anna Maria’s details show her maiden surname as ‘King’, aged 18, born in Warwick, Queensland. There is no mention of her previous married name ‘Blade’. The ‘innkeeper’ could mean just that or alternatively, like so many others, Okey was selling ‘grog’ to support his gold seeking activities.

Nothing more is known about the Okeys in Australia or when they actually migrated to London. In an article in Musical Celebrities, by F. Forster Buffen, 1893, he wrote they returned about 1869 and that Anna, 5 (now known as Maggie) had started to learn the notes on the piano at the age of 2 and had her first music lessons from an organist thought to be in the town of St Leonards, England.

In 1820 St Leonards was built as a neighbouring town to Hastings (famous for the battle of 1066). It grew so quickly in the 19th century it became united with Hastings. There were, and still are, a number of organs listed in churches in St Leonards.

At the age of seven Maggie Okey played with great success at the Queen’s Concert Rooms, Hanover Square. She entered the London Academy of Music, and stayed there for several years, studying piano under Dr Henry Wylde, and harmony and composition with Ferdinand Praeger.

In 1882 Maggie was present at St James Hall when Vladimir de Pachmann, born 1883 in Russia, gave his first recital in London. He was the most celebrated interpreter of Chopin of his generation. He continually both amused and scandalised the public by his eccentricities.

Late in his career when playing Chopin he wore an old coat of Chopin’s and would address odd remarks to his audience and to his hands. Towards the end of his life his mind was unbalanced, but his performance of Chopin remained perfect.

In October 1882, aged 18, Maggie Okey went to Germany and became de Pachmann’s pupil at her request after he had heard her play. For the next eighteen months she submitted to a vigilant course of instruction by de Pachmann.

Eventually they were married. She had three sons. Victor who died in infancy in St Petersburg; Adriano (Adrian), born in London in 1886 studied law in Paris; Leonide (Lionel) born in London 1887, eventually became a successful pianist, composer and critic.

The marriage lasted only seven years. They were divorced when she was 27 and he was almost 40 years old. Her career was determined by her family obligations and her ambitions to be a composer and concert pianist.

After divorce Marguerite moved to Paris and began teaching the piano at the de Pachmann Piano School that she established. On his death in Rome in 1933 Vladimir de Pachmann bequeathed his teaching methods to his ex-wife.

Marguerite continued to compose. She frequently played her own compositions Theme and Variations and Reverie du Lac and a Sonata in recitals.

She married for a second time Maitre Fernand Labori, a lawyer who made his reputation as the defence counsel in the famous trials of Zola and Dreyfus. There were three girls from this marriage. One daughter became Princesse de Philippe de Bourbon. Fernand died aged 56 in 1917.

The girl from Pipeclay continued her work. There is much more to her life and times than is possible on this site. She played, composed and conquered until her death in Paris on July 3. 1952.’