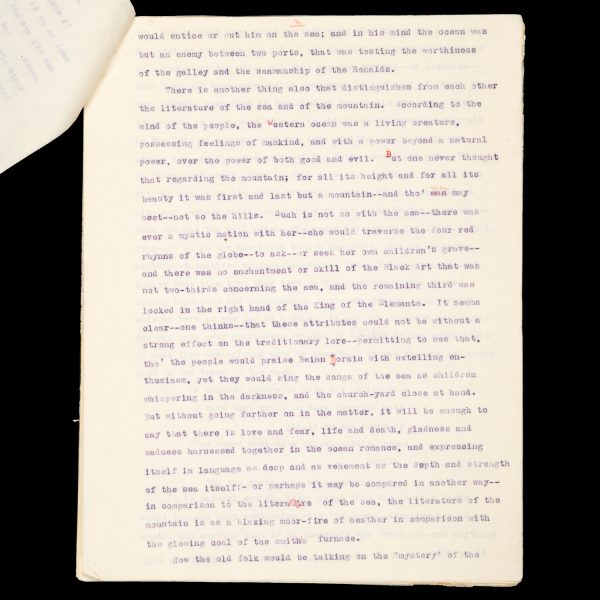 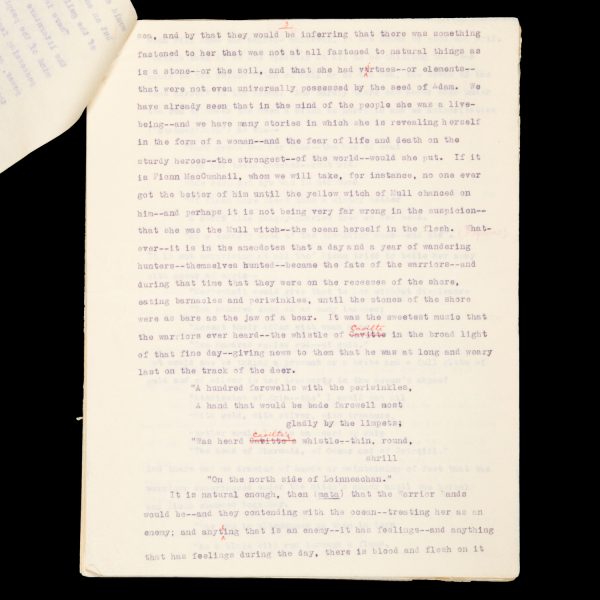 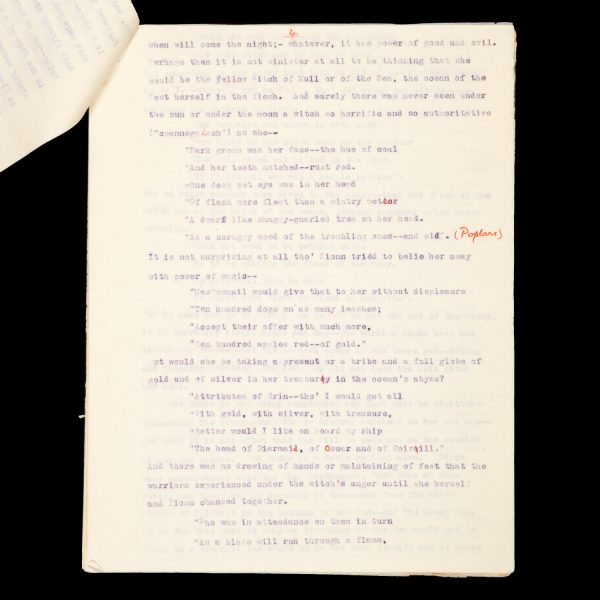 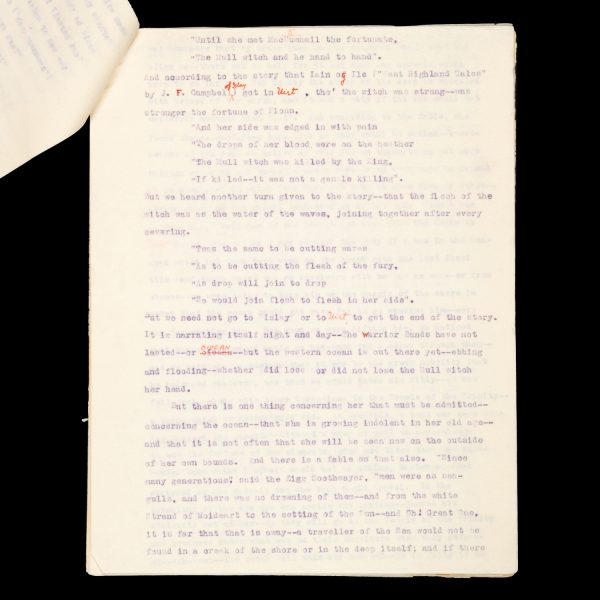 “Duatharachd na mara.” (The Romance – or the Mystery of the Sea) / by Kenneth Macleod “The Minister of the Songs” translated by Iain Macalastair Moffatt-Pender. [In red ink above title: NOT FOR PUBLICATION]. [n.d., but 1927, or earlier]. Quarto (270 x 210 mm), typescript, still bound with the original loop of fine wire at top left corner; pp [1 title page], 21, [1 half sheet]; pagination and author’s revisions and corrections in red ink; light horizontal fold, a few dog-eared corners, but clean and complete.

The first English translation of this important essay was made by I. M. Moffatt-Pender, and was published in 1927 as Duatharachd na mara = (The mystery of the sea) (Stornoway : Printed at the Gazette Office). The unique typescript we offer here is a draft by Moffatt-Pender of his nearly-finalised translation. With numerous corrections and revisons, the text is clearly still somewhat fluid: Moffatt-Pender was even undecided about how best to translate Duatharachd and gives two alternatives in his working title – Romance, alongside the ultimately favoured Mystery.

“The son of Donald and Jessie MacLeod, Rev. Kenneth MacLeod was born on Eigg on 2 February 1871, and was a lover of folklore, especially from his native isle. He collaborated often with Marjory Kennedy-Fraser, as her collector and Gaelic translator, for her three volumes of “The Songs of the Hebrides” (1909-1921). He was a famous poet in both Gaelic and English, and is perhaps best known for works such as “The Road to the Isles”—a poem ‘written for the lads in France during the Great War.’ He published two books of West Highland folklore, “The Road to the Isles” (1927) and “The Road to Iona” (1933). The work he did for the preservation of Gaelic literature was recognised in the degree of Doctor of Divinity which was conferred on him by St. Andrews University in 1932. MacLeod was also a long time Church of Scotland minister; after being ordained in 1917, he was the minster Colonsay and Oronsay until 1923, and then of Gigha and Cara until 1947. He died in Edinburgh on 9 July 1955 and is buried in Taynuilt cemetery, and he is commemorated in stained-glass windows in Gigha Church and in Iona Abbey.” (Gaelic Literature of the Isle of Skye: an annotated bibliography)

“Iain (sometimes spelt Ian) McAllister Moffatt-Pender studied Celtic Language and Literature under Professor W. J. Watson at Edinburgh University, before his studies were interrupted by the First World War, during which he fought in the Seaforth Highlanders. Before the War he also represented Scotland as a Rugby Union international. In 1932, he emigrated to Australia and made a fortune as a sheep farmer. He returned to Scotland after the Second World War and completed his degree in 1951. He wrote plays in Gaelic on Jacobite themes, and was an important patron.” (University of Edinburgh)

In London in December 1917 Captain Moffatt-Pender married Lorna Ledlie Smyth of East St. Kilda, Melbourne, and in 1932 the couple emigrated to Australia and settled in the fashionable suburb of Toorak, where they became part of the Melbourne social set. The Moffatt-Penders also owned a property at Mount Macedon, just outside Melbourne. Captain Moffatt-Pender’s collection of paintings by his close friend, the renowned Australian artist Sir Arthur Streeton, was sold after his death by Leonard Joel (Melbourne) in 1961.