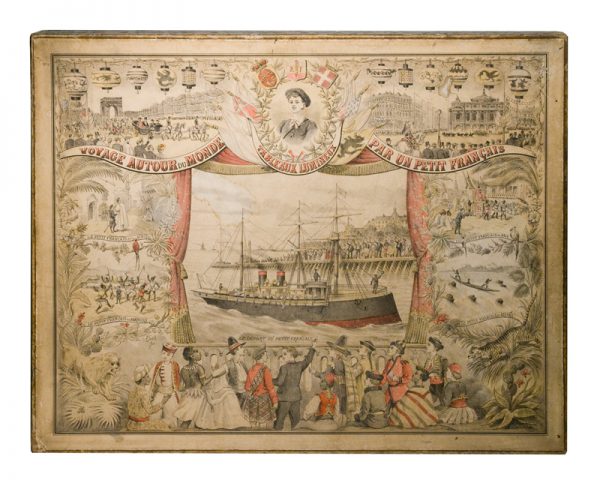 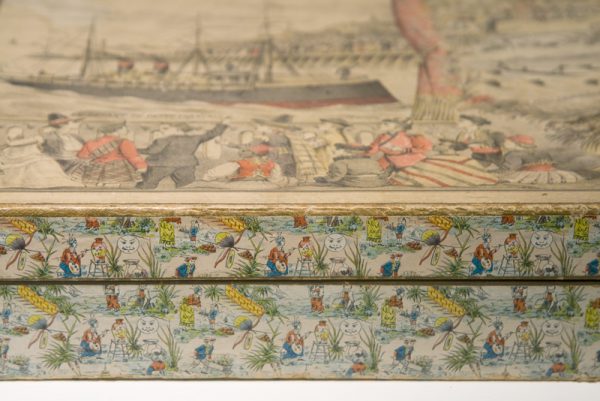 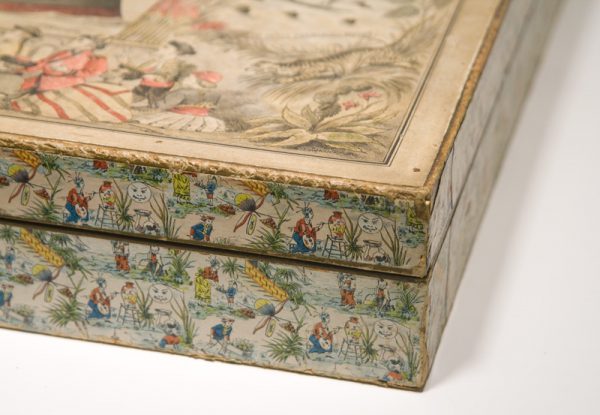 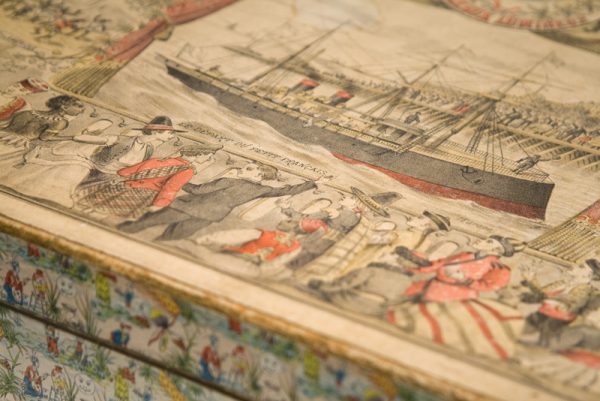 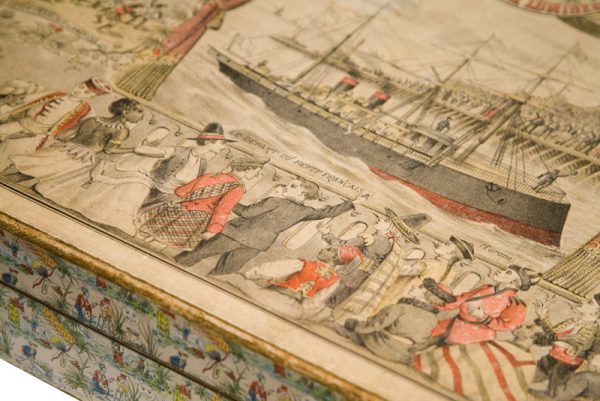 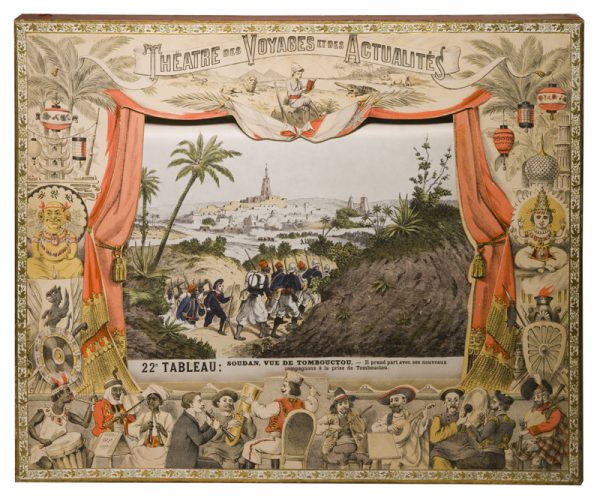 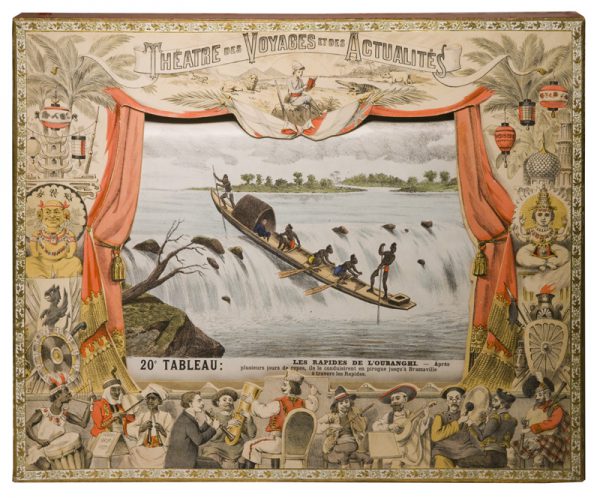 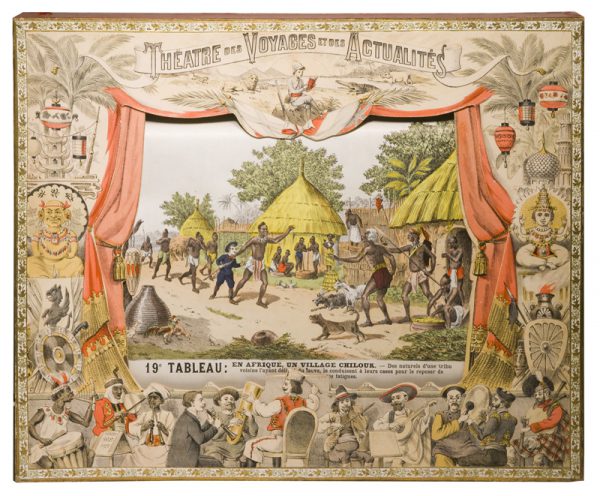 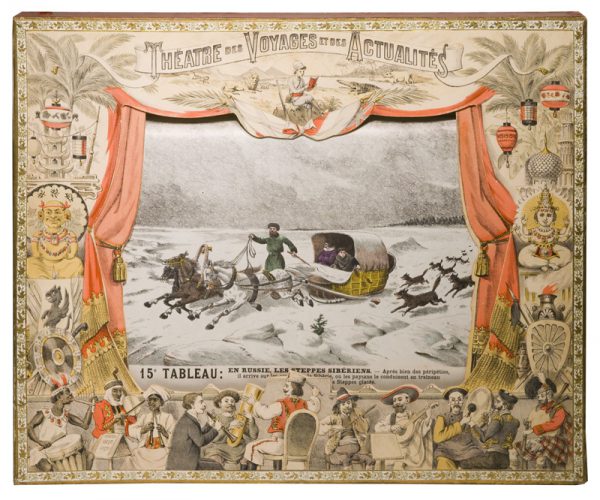 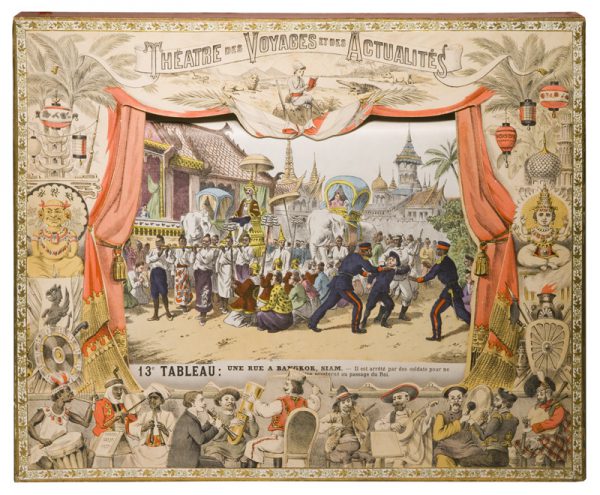 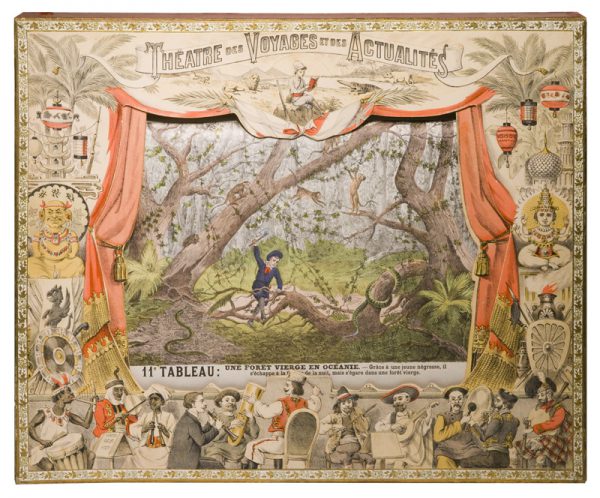 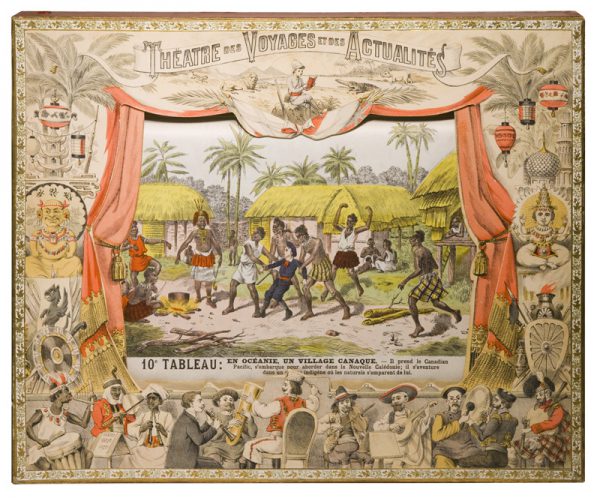 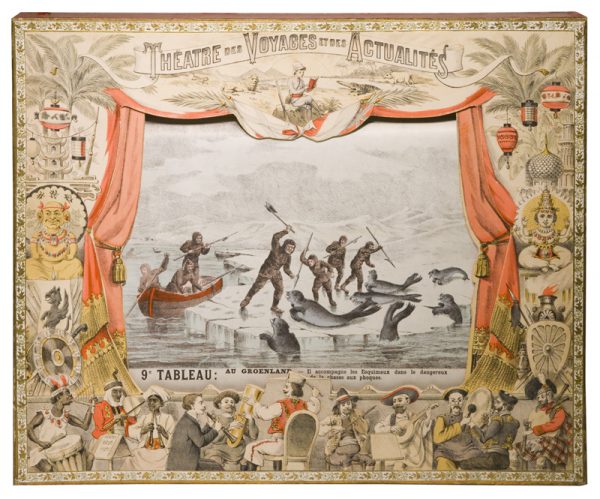 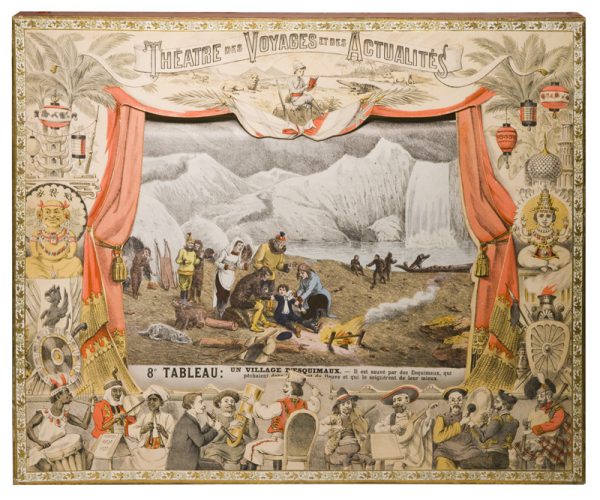 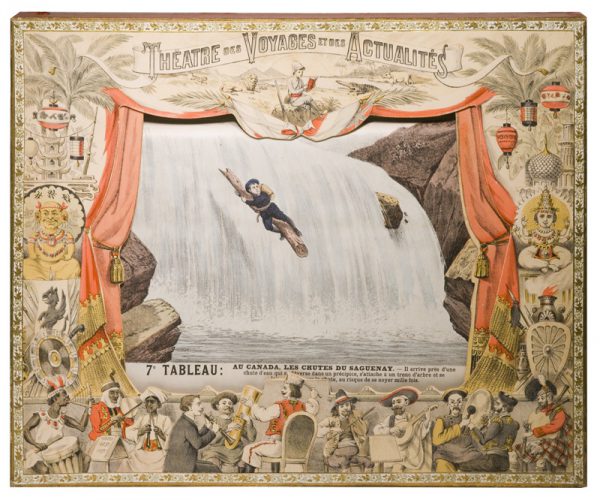 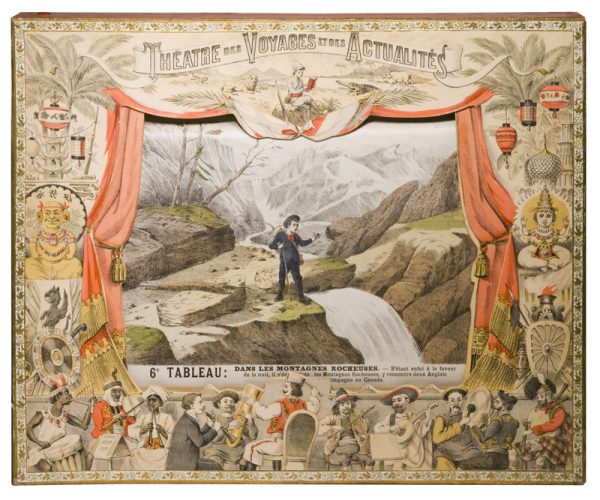 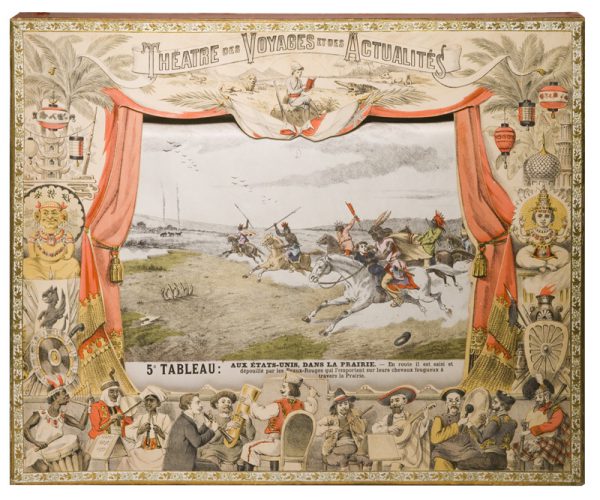 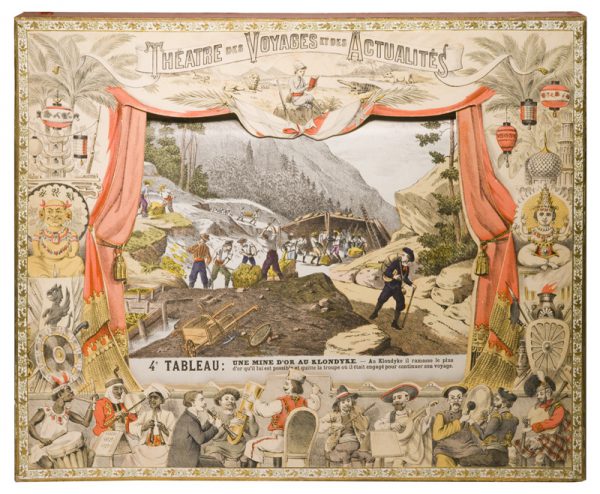 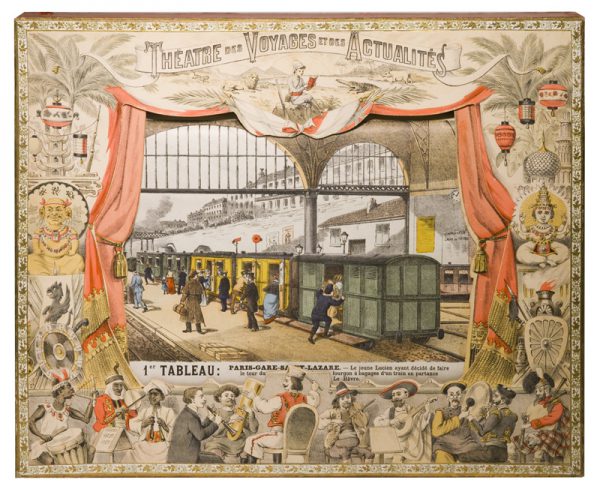 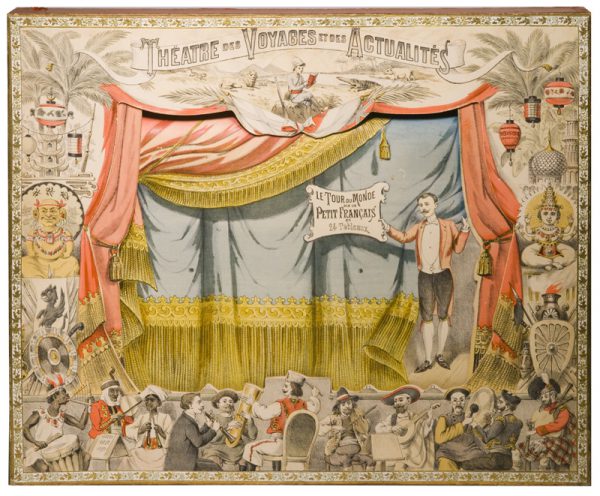 An outer box of thick card (400 x 505 x 83 mm) with paste-down chromolithographic illustrations, the central design showing the departure of the young hero surrounded by scenes from his voyage. The box contains the moving diorama (370 x 455 x 75 mm) which operates on a roller mechanism. The borders of the diorama are also decorated with chromolithographic illustrations: an orchestra pit below the ‘stage’ is filled with musicians from different countries and emblems representing the five continents, and a banner shows the young explorer reading a travel account in the midst of wild animals. A roller mechanism and key allow the long scroll to slowly unwind, gradually revealing – in a sequence of 24 captioned chromolithographic tableaux (each 200 x 300 mm, a few sealed tears) – the young French boy’s voyage around the world. The rear of the box has printed instructions for operating the diorama. A light source can also be placed behind it, adding to its atmosphere and richness. The diorama is fully workable and in remarkable condition.

The scrolling theatre visually recounts the adventures (and misadventures) of a young boy travelling across the world. His journey begins in Paris. The young Lucien, having decided to make a world trip, hides himself in the baggage compartment of a train leaving for Le Havre (I); Le Havre (II); A street in New York (III); A goldmine in the Klondike (IV); In the United States, on the Prairie (Indian Attack) (V); In the Rocky Mountains (VI); In Canada, the Saguenay Falls (VII); An Eskimo village (VIII); In Greenland (Seal Hunt) (IX); In Oceania (Canaque village) (X); A virgin forest in Oceania (XI); A street in Peking (XII); A street in Bangkok, Siam (XIII); Benares on the Ganges (XIV); In Russia, the Siberian Steppes (XV); In Moscow near the Kremlin (XVI); In Africa, among Tuaregs (XVII); In Africa, in the land of the Niams-Niams (XVIII); In Africa, a Chilouk village (XIX); The rapids of the Oubanghi (XX); French Congo, in Brazzaville, mission (XXI); Sudan, view of Timbuktu (XXII); In Algiers, a view of the Kazbah (XXIII); France, Marseilles, Joliette Gate (XXIV) – having disembarked at Marseilles, Lucien is apprehended by the police, and returned to his anxious parents.

The fact that the young hero participates in the capture of Timbuktu (XX), an event which took place on 10 January 1895, gives us a terminus post quem for the publication of the diorama. The designer was a gifted artist, Lucien Maucler (working under the name Mauclair-Dacier), whose name features in the printed instructions. Maucler was one of several designers employed by the publishers Jeux et Jouets Francais in the early 1900s.

This exceptionally beautiful object is difficult to categorize, blending as it does elements of children’s book illustration, game and toy theatre design, as well as animated pre-cinema devices.