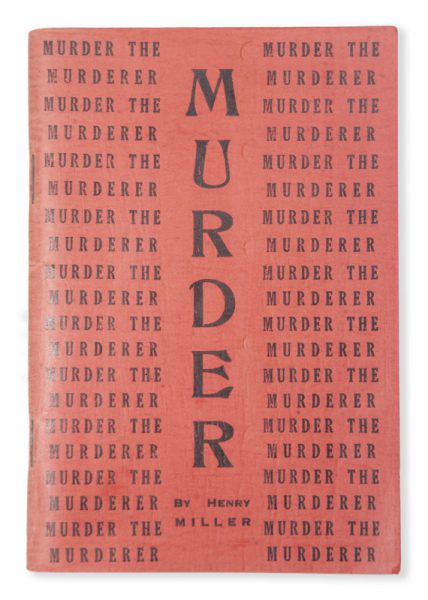 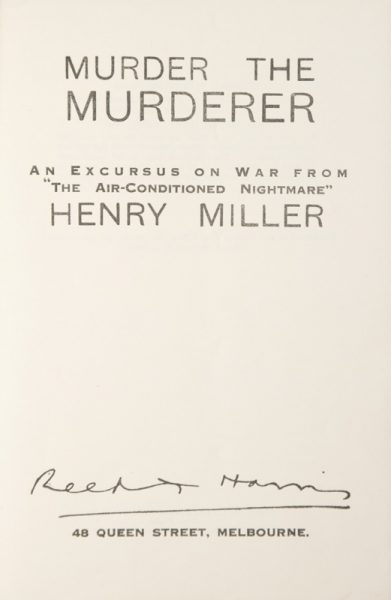 An excurus on war from “The Air-Conditioned Nightmare”. Melbourne: Reed & Harris, [1946]. First Australian edition (published in Big Sur by the author in 1944). Duodecimo, printed wrappers, 86 pp., a fine copy. At the time of publication this work by important playwright Miller was banned in America.

Miller’s anti-war pamphlet in two parts. Part I: Open Letter to Private Alfred Perles (written in 1941); Part II: Murder the Murderer (dated May, 1944). Miller’s postscript to Part 1 is dated June 25, 1944. Miller’s writings were banned in the United States at the time, and the Big Sur edition contains a disclaimer distancing the publisher and printer from Miller’s views.

“The novels of American writer Henry Miller (1891-1980) were banned in England, the United States and Australia, at the time that his essay, ‘Obscenity and the Law of Reflection’, was published in the first issue of Angry Penguins Broadsheet in 1946. The essay marked Miller’s first appearance in print in this country, to be followed the same year by the Reed & Harris publication of Murder the Murderer, advertised in the fourth issue of the Broadsheet as ‘the first book by Miller to be published and to become generally available in Australia’. The pamphlet, first published in the United States in 1944, is described by the publishers as ‘a brilliant, angry exposition of Miller’s attitude towards war and towards future wars’ – COWLEY, Des, A checklist of Reed & Harris Publications, in The La Trobe Journal No 64, Spring 1999, p. 49.

Art historian Richard Haese attributes the typographical cover design for the Melbourne edition (1946) to Sidney Nolan, however as it copies exactly the Big Sur edition of 1944, this seems unlikely. (see Rebels and Precursors : the revolutionary years of Australian art, Melbourne, 1981, p. 122).