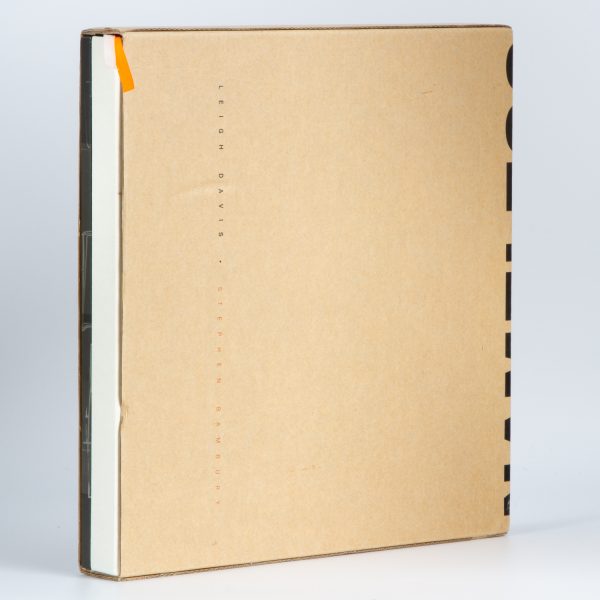 [with the second work, Redux]

“NAMELESS/REDUX is the last poetry work by Leigh Davis, published posthumously by Jack Books in April 2013.

It is two books and a DVD sold as a box set. The first book, Nameless, was designed by Arch and Jane McDonnell at InHouse Design with art direction by Stephen Bambury, and printed in 2008. The second book, Redux, was printed in 2013 and designed by Stephen Bambury with technical assistance from Christine Hansen. Leigh Davis, author of Nameless, died in October 2009.”

As these details suggest, the story behind NAMELESS/REDUX is a complex and unusual one. Presented in a box containing two books and a DVD, it is a big poetry work with a big ambition for poetry. The first and larger of the two books, the text-only hard-covered , white linen bound book, carries Nameless, a long poetry work conceived as a play in Acts and Scenes. It was Leigh’s intention to see the poetry taken off the page, as a physical work installed in several rooms using projection, light, sound and voices as a complex work to be interacted with rather than simply read.”

The second book Redux, overall the same dimensions but soft cover and highly visual, is a companion book which acts something as a blueprint for this intended physical version of the work. In the back of Redux there is also a DVD which carries a 10 minute virtual film or ‘flythrough’ of this physical Nameless, also the recorded voices of Michael Hurst and Jennifer Ward-Lealand reading scenes from ACT II Wedding, and sound by Alastair Galbraith. This sound is also present in the flythrough.” – Jack Books (http://www.jackbooks.com/Leigh/online/nameless.htm)