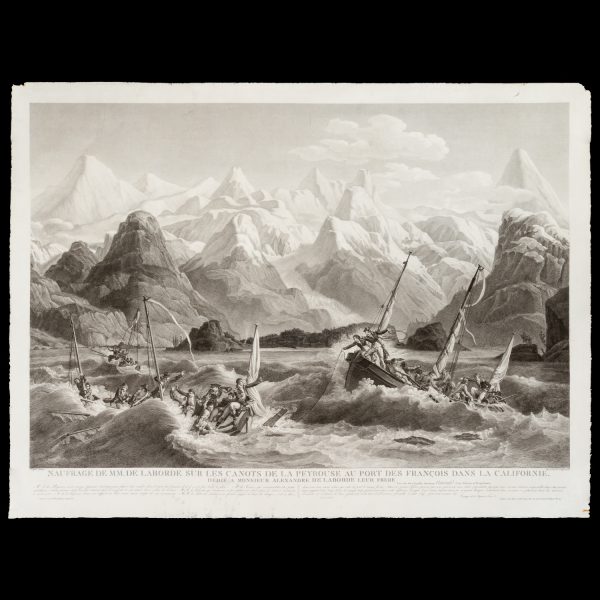 ‘In July 1786 La Perouse anchored in Lituya Bay on the south-east coast of Alaska. On 13 July three small launches were returning from a reconnaissance when one boat capsized in the turbulent waters of the bay. The second boat attempted to rescue the drowning sailors, but suffered the same fate. The third boat returned safely. In all 21 sailors were lost, among them were two brothers, the young naval officers, Edouard and Ange de La Borde (Laborde). This engraving is based on Louis-Philippe Crepin’s painting Naufrages des biscayennes au Port des Francais, ca. 1806. It shows the first boat sinking in the foreground, the second boat throwing a line at the right, and the third boat returning to La Perouse’s ships, which are just visible behind the island at centre left. The background is dominated by majestic snow-capped mountains. The original painting and engraving were dedicated to Edouard de La Borde, who is depicted at the bow of the second boat throwing the line, as well as his brother Ange who was in the first boat. Both brothers are identified in the engraving’s caption title. The incident is described in La Perouse’s official account of the expedition, published in 1797.’ (State Library of New South Wales)

An artwork which strikingly exemplifies the perils of the sea during the great era of European exploration in the Pacific.