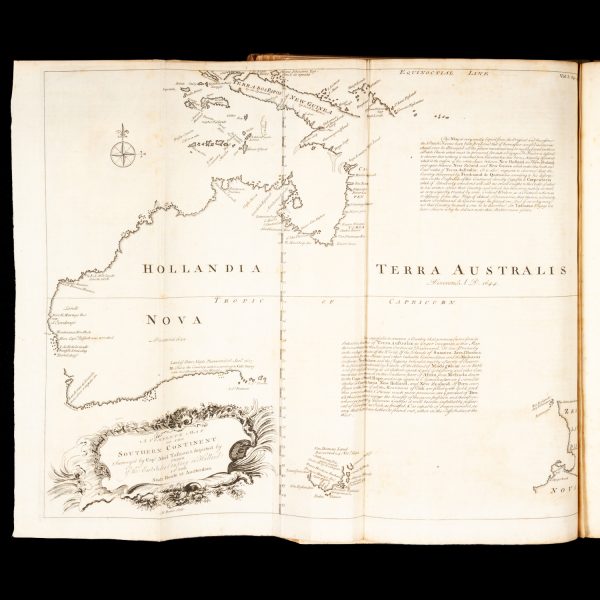 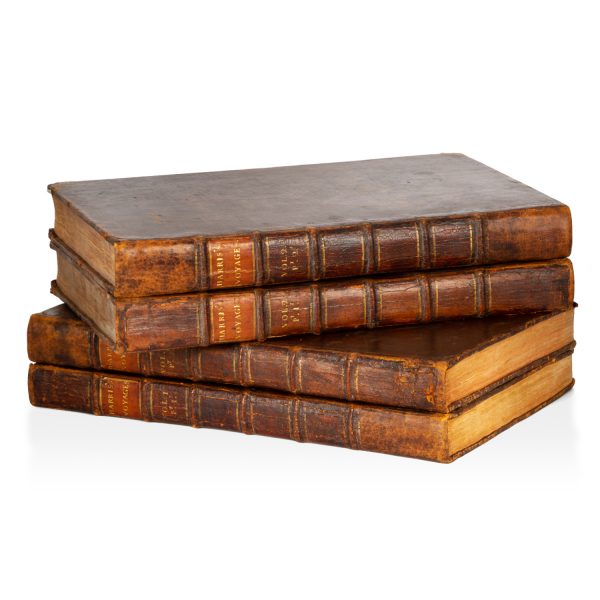 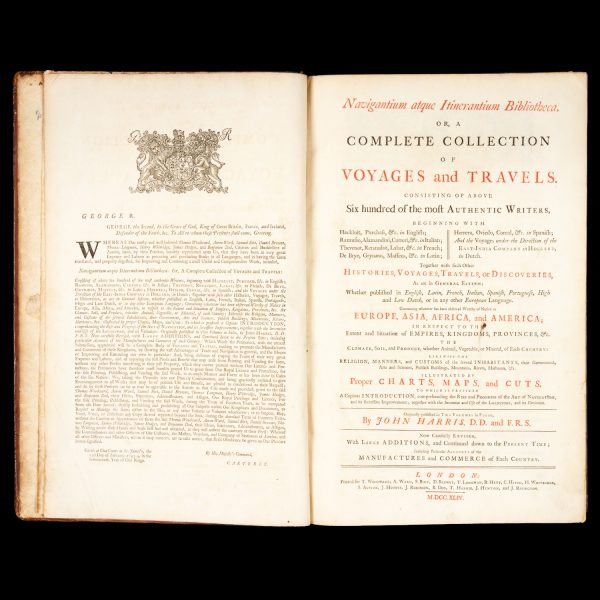 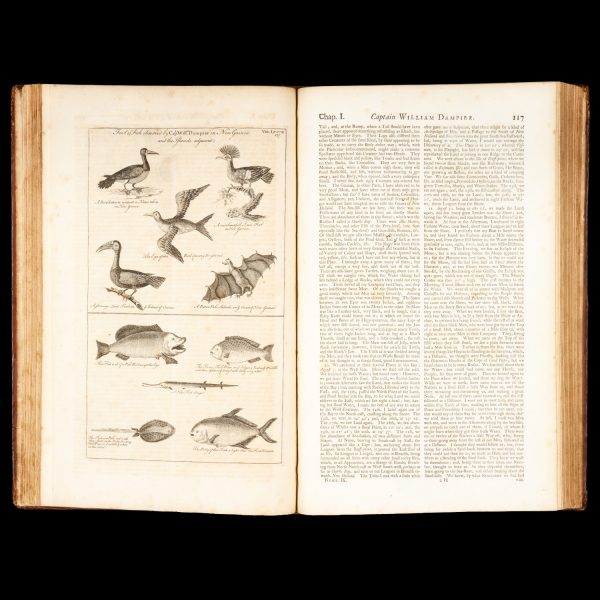 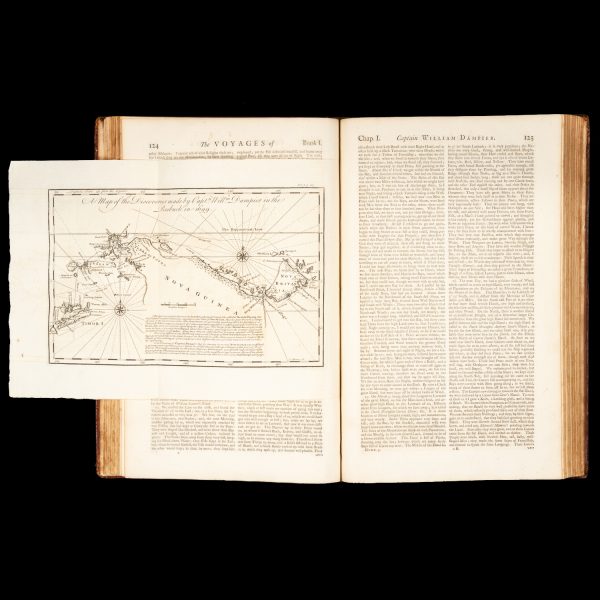 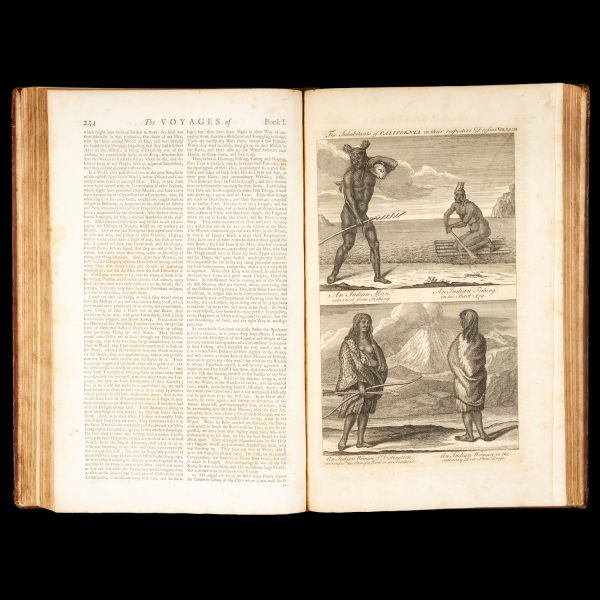 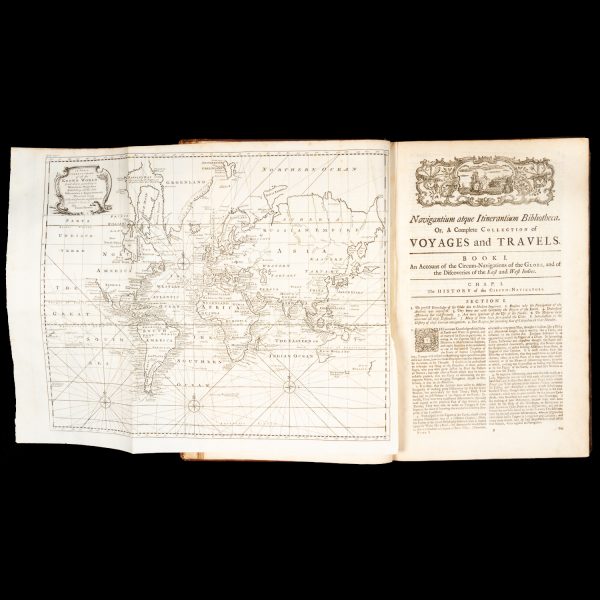 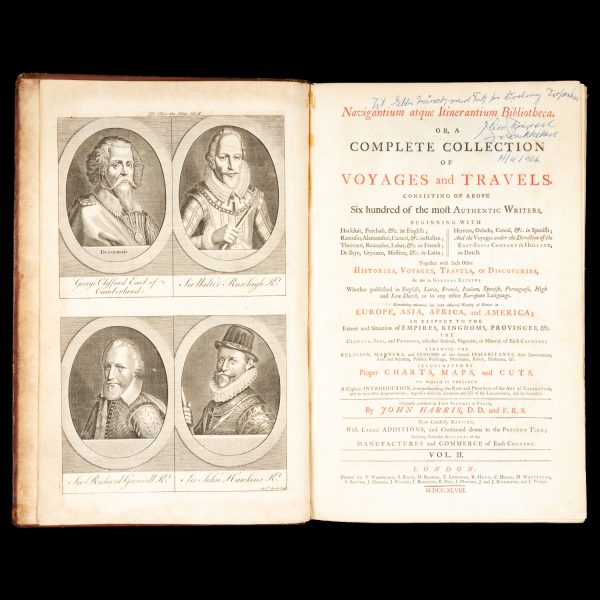 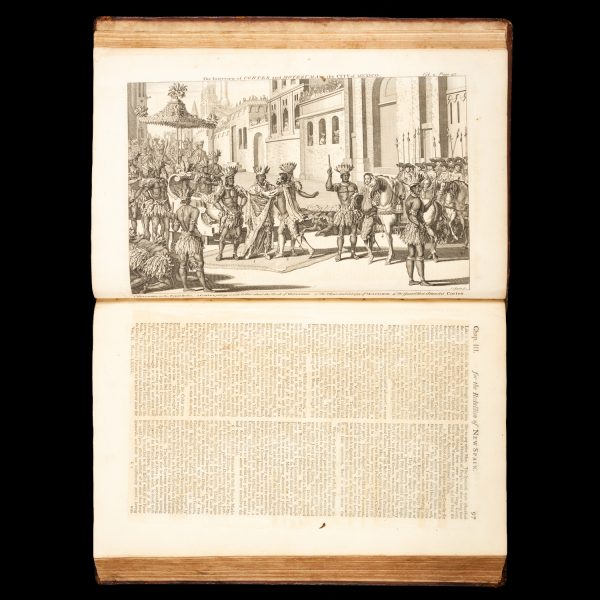 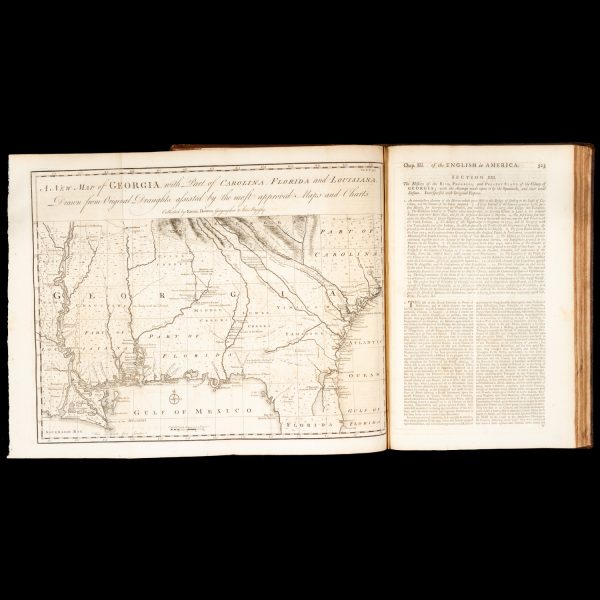 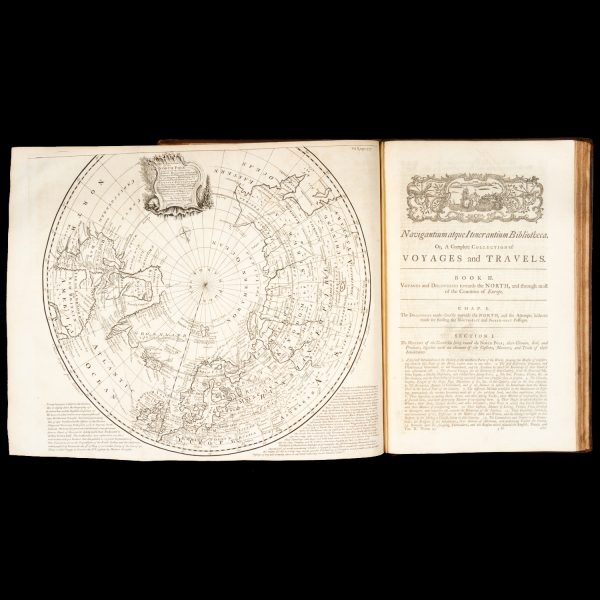 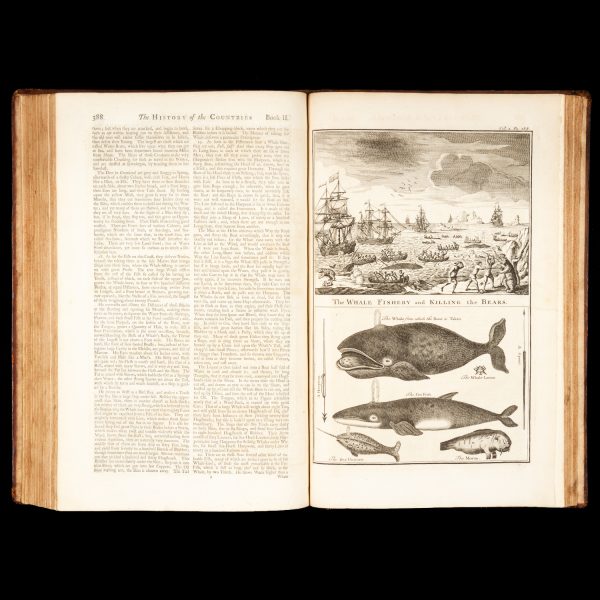 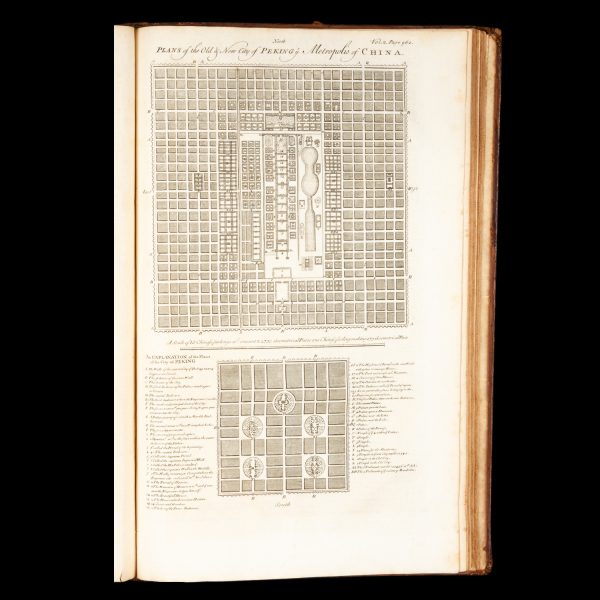 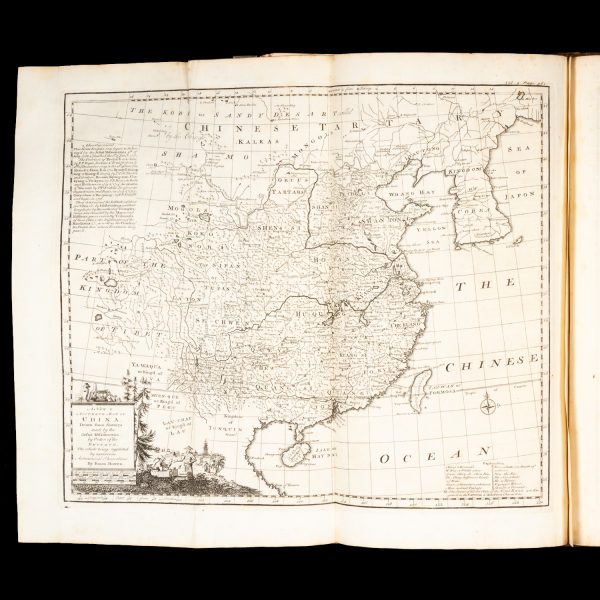 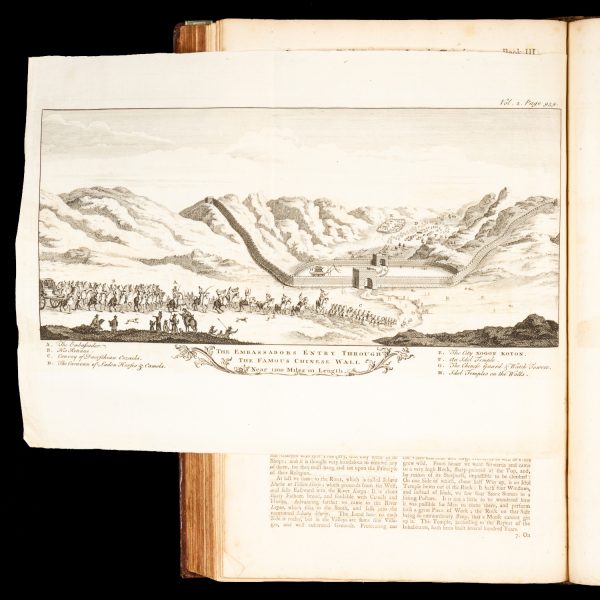 Navigantium atque itinerantium bibliotheca, or, A complete collection of voyages and travels : consisting of above six hundred of the most authentic writers …

Containing whatever has been observed worthy of notice in Europe, Asia, Africa, and America … the climate, soil and produce … of each country: likewise the religion, manners, and customs … To which is prefixed a copious introduction, comprehending the rise and progress of the art of navigation … together with the invention and use of the loadstone, and its variation … Originally published in two volumes in folio, by John Harris, D.D. and F.R.S. Now carefully revised with large additions and continued down to the present time, including particular accounts of the manufactures and commerce of each country. London : Printed for T. Woodward, A. Ward, S. Birt, D. Browne, T. Longman, R. Hett, C. Hitch, H. Whitridge, S. Austen, J. Hodges, J. Robinson, B. Dod, T. Harris, J. Hinton, and J. Rivington, 1744-48. Second edition. Two volumes bound in four, folio (405 x 260 mm), uniform contemporary speckled calf (boards rubbed and with occasional grazing, corners worn), spines in compartments with contrasting leather title pieces lettered in gilt, volume numbering stamped in gilt; volume 1 (bound in two parts), [1 copyright], [8], xvi, [4], 984 pp; volume 2 (also bound in two parts), [10], 1056, [22] pp, with index and list of maps and plates; with a total of 22 engraved maps (14 folding) and 39 plates; pagination erratic at places; titles in red and black; volume 2 pt. 1 with later gift inscription to title, pt. 2 with inscription in same hand to front free-endpaper; minor spotting and staining. A fine set in contemporary binding.

Substantially expanded from the first edition of 1705, with many more maps and plates, this is the second – and most desirable – edition of this encyclopaedic collection of early voyages. The highly significant cartographic content includes the first separate English map to focus on Australia: by Bowen after Thevenot’s map of 1663, it shows the discoveries of Tasman, with known the coastlines of New Holland, New Guinea and New Zealand. There are also a number of important maps of North and South America (including Bowen’s A New Map of Georgia, with part of Carolina, Florida and Louisiana), the Northwest Passage, the Arctic (perhaps the earliest map of Bering’s Great Northern Expedition), China, the Russian Empire, India, the East Indies, Africa and other regions, and plans of urban centres such as Canton, Peking, Batavia, and Potosi. The plates include ethnological and natural history subjects, a view of the Great Wall of China, and The Interview of Cortes and Motezuma in the City of Mexico,

“The second edition, especially prized for its maps, has been called the most complete by several authorities. Particularly valuable is the inclusion of a printing of Tasman’s original map and two short articles printed on the map. One discusses Quiros’s voyage, while the other speculates about the possibility of the Australian continent being colonized: ‘Whoever perfectly discovers and settles it will become infallibly possessed of territories as rich and fruitful and as capable of improvement as any that have hitherto been found.’ To the original extensive collection are added accounts of voyages completed since the first publication: Christopher Middleton to Hudson’s Bay, 1741-42; Bering to the Northeast, 1725-26; Woodes Rogers’s circumnavigation, 1708-11; Clipperton and Shelvocke’s circumnavigation, 1719-22; Roggeveen to the Pacific, 1721-33; and the various travels of Lord Anson, 1740-44” (Hill).

The voyage accounts include those of Tasman, Dampier and Pelsaert, as well as many other travellers to the East Indies and the Pacific. The second part of the first volume contains 600 pages devoted to Comprehending the discovery, settlement, and commerce of the East-Indies, with the accounts of Marco Polo, de Rubruquis, Pirard de Laval, Mandelslo, Commodore Beaulieu, Tavernier, James Cunningham and William Adams, and others. The second volume principally covers exploration in the Americas, with sections on China and the Middle East.