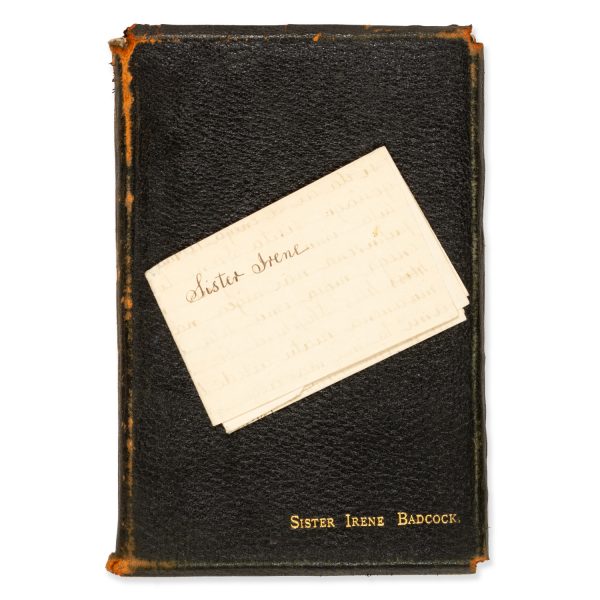 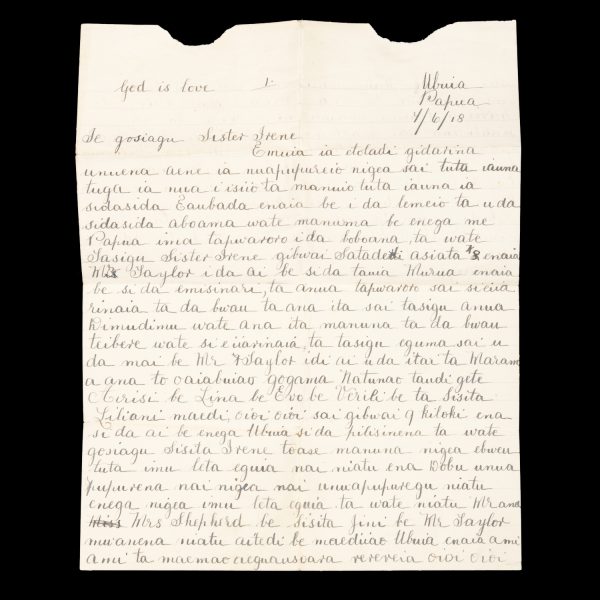 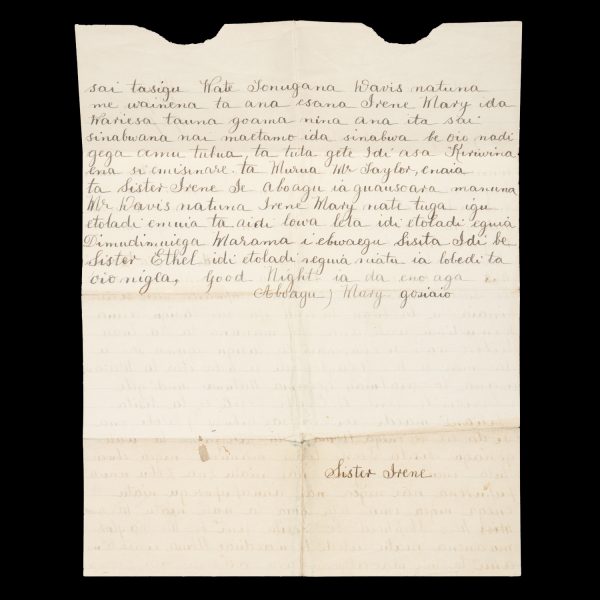 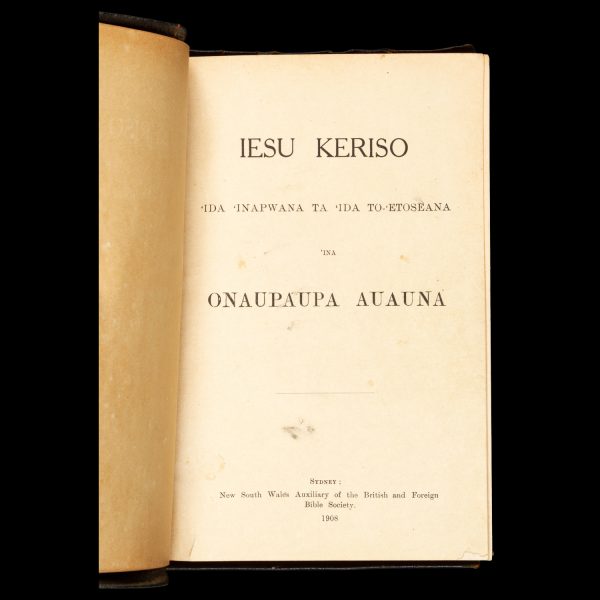 Verso of title page: The New Testament in Dobuan, Papua, New Guinea. Sydney : Auxiliary of the British and Foreign Bible Society, 1908. First edition. Octavo (210 x 140 mm), contemporary yapp-edged limp morocco (a little scuffed, worn at head and tail of spine and rear top edge) with the name ‘Sister Irene Badcock’ stamped in gilt in the bottom corner of the front cover; edges stained red, pp [iv], 318; title with a few light marks, else clean throughout, a very good copy; loosely inserted is a letter in Dobuan, 2 pp quarto, manuscript in ink, addressed to Sister Irene and written by ‘Mary’ at Ubuia, Papua, 7 June 1918, with the phrase ‘God is love’ in English at the head; old folds, fine; also inserted between the centre pages of the Bible is a pressed leaf (from Ubuia?). From The Papuan Collection of Charles Fletcher, Melbourne, his bookplate to the front free-endpaper.

Miss Irene Badcock, a young Adelaide woman, served as a missionary nursing sister at the leper colony established by the Methodists on Ubuia in the D’Entrecasteaux Islands. She arrived there in mid 1915, and it is likely that the letter in Dobuan which she preserved for posterity in the pages of her Dobuan New Testament was given to her around the time of her departure from the island by an indigenous woman, Mary, whom she had taught to read and write at the mission.

The following report appeared in The Methodist (Sydney), 15 May 1915:

‘FOREIGN MISSIONS. WOMEN’S AUXILIARY. A meeting was held in the Board Room on April 26th, to bid farewell to the Rev. G. A. Burgess and Miss Badcock, who were leaving for Papua, and the Rev. H. S. and Mrs. Jarvis, who have been appointed to Kadavu, Fiji. It was hoped that the Rev. J. W. and Mrs. Booth would also have been ‘farewelled ‘ before sailing for Papua, but they were not able to be present. The chair was taken by the President of the Conference. With him were the Rev. Dr. Sellors, who recited a part of lsaiah 40, the Rev. J. G. Wheen (Gen. Sec. of Missions), Mrs. O’Reilly, Mrs. Eggleston (President of the Victorian W.A.F.M.), and Miss Monica Brown. Words of appreciation and sympathy were spoken by the President and Mr. Wheen. The Rev. G. A. Burgess gave a very interesting and informing address on ‘The Women and Girls of Papua.’ He spoke very gratefully of the assistance to the workers on the mission field rendered by the Women’s Auxiliary, urged the advisability of having a central training home for missionary sisters, and asked for the continued prayers of God’s people, especially for the missionaries’ wives and the sisters. The Rev. W. H. Cox (Rabaul) and the Rev. H. C. Rycroft (Solomon Islands) thanked the members of  the Women’s Auxiliary for their sympathy and help, Mr. Rycroft telling how boxes had arrived at the mission station just at a time when they were specially needed, the contents of which — and the love that prompted the gifts — bringing joy and cheer to many hearts. The Rev. H. S. Jarvis thanked the friends in New South Wales for giving him and his wife the opportunity of taking part in the meeting, and said that they were going forth to the mission field with a strong trust in God and the belief that they would be upheld by the prayers of the friends in the homeland. Miss Badcock also expressed her appreciation of the sympathy and prayers of the Methodist people of New South Wales. Mrs. Eggleston and Mrs. O’Reilly bade the travellers God-speed, and assured them that they would not be forgotten, and hoped that the workers who were on furlough would gain renewed health and fresh encouragement from their sojourn in Australia.’

In 1932 the South Australian Museum purchased from Sister Irene what is now known as The Badcock Collection from the Upper Congo. Acquired by the museum for the paltry sum of £45, it contains 141 artefacts and 26 photographs. Most of these objects had originally ‘been part of a Congo Exhibition in London in 1909 that was set up by missionaries to draw attention to the atrocities alleged to have been perpetrated by King Leopold’s agents who were extracting first ivory, then rubber, from the Congo Free State’ (Barry Craig. The Badcock Collection from the Upper Congo, in The Australasian Review of African Studies, Volume 32, number 1, June 2011, pp 119-146).