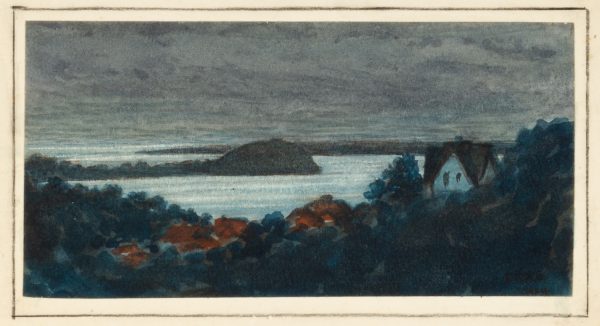 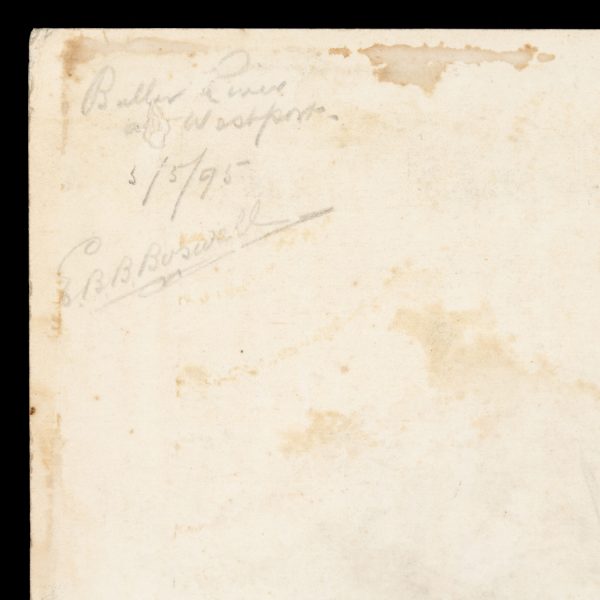 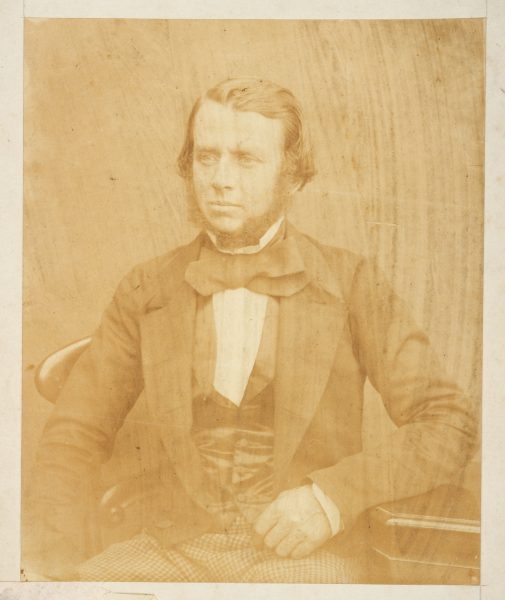 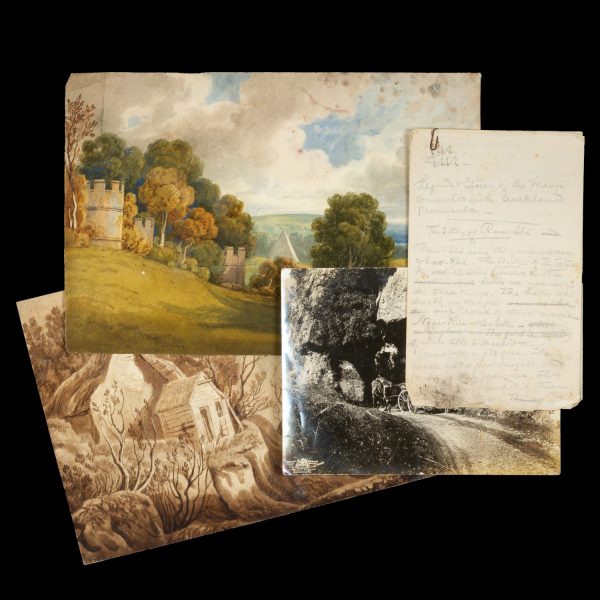 I. The brigantine Oceola … Buller Bay 1887. [Title from artist’s caption on mount]. Watercolour on paper, 230 x 153 mm, signed and dated in the image lower right E. B. B. Boswell 1887; laid down on fully contemporary card (190 x 290 mm), verso titled in pencil by the artist (partially illegible), and signed E. B. B. Boswell. Damp staining to left and bottom margins of mount (not affecting image). Note: The Oceola was wrecked in 1887 at the mouth of the Buller River while being towed out of Westport with a cargo of coal.

IV. Lake Brunner (Moana) / 6 miles long by 4 miles wide / Mountains the Hohonu Range / Westland. [Title from artist’s caption on mount]. Watercolour on paper, 124 x 169 mm, initialed in the image lower left E. B. B. B. and captioned and dated lower right Lake Brunner. NZ. 5.6.18.; laid down on fully contemporary card (175 x 225 mm), verso titled in pencil by the artist and signed E. B. B. Boswell. Water staining to mount and sections of image.

The above works are accompanied by a small group of Boswell family photographs and ephemera:

(i). [Three schoolboys in fancy dress costume]. Albumen print, cabinet card format, 165 x 106 mm (mount), lower margin recto with imprint of [W. H.] Vinsen, Westport; verso blank; the print is in good condition, with small loss to bottom corner of mount. Note: The trio of boys in this 1890s studio portrait were presumably Boswell’s pupils at the Wesport high school. One is dressed as Punch, one possibly as Captain Cook (?), and the other perhaps as a Musketeer.

(ii) [Portrait of a gentleman]. Albumen print, 225 x 185 mm, laid down on 1880s card mount; no identifying inscriptions. Note: The dignified sitter in this very large format portrait, no doubt taken from an 1850s daguerreotype, is possibly E. B. B. Boswell’s father.

(v) Pair of early to mid-19th century watercolours on paper, probably Argyllshire landscapes done by a member of the Boswell family. Each 200 x 305 mm; unmounted and unsigned; both damp stained.

The following reminiscence of E. B. B. Boswell by his artist son, James, is quoted in an essay by Herbert Roth, James Boswell : a New Zealand artist in London, in Auckland City Art Gallery Quarterly, Number 65, December 1977:

‘”My father,” wrote Boswell in an aubiographical letter, “helped to create surroundings which made simple and acceptable the idea of being a painter. He was a skilful amateur watercolourist who did little work but kept up a passionate interest in the arts. The house he designed and built in Westport was very much influenced by Arts and Crafts Movement ideas which he absorbed from The Studio (he subscribed to it from its beginning and kept it as well as all the year books and special numbers). He designed all the furniture as well and had it made from New Zealand woods… He was addicted to books. Never threw one away. The house was full of them and I lived off them. My mother told me much later that, when they married, my father owed the local bookseller a debt larger than his year’s salary… This bookish world was the background to a lot of activity. He collected shells… He collected botanical specimens… He collected geological specimens, worked industriously as an amateur topographical photographer, designed furniture and made it in carved wood and beaten brass and round about April every year he took to watercolour painting (on a small scale). My mother claimed that these spells began and ended always on the same dates. As a result of these various interests he never persisted at anything for long enough to excel at it but he managed to create in his home a cultural circle which attracted people from all over New Zealand. It was much the same in Auckland – we moved there in 1917 and seemed to have an open house. Being a painter seemed to me the most natural and easy thing in the world, once I had persuaded the family that they didn’t need a doctor in the family”‘ (ibid., p.3).