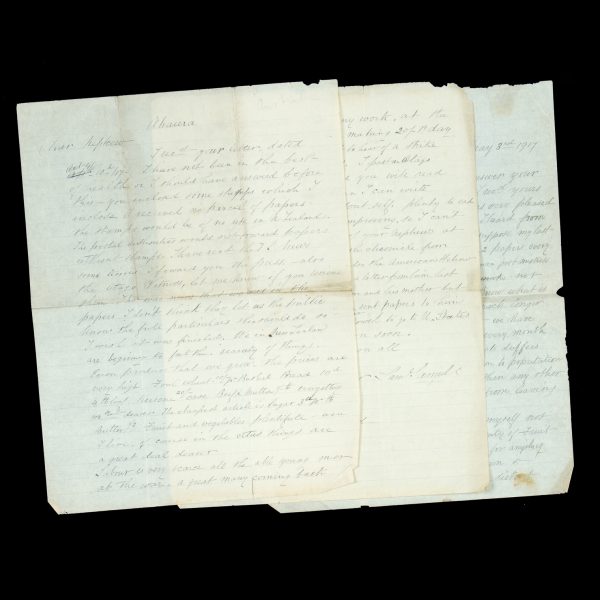 Newspaper notices from the 1870s inform us that Samuel Samuels was a pioneer settler in the Ahaura district of Westland. Like many others, he had arrived during the West Coast gold rush and had been involved in gold mining ventures. By 1917, when Samuels wrote both of these letters to one of his nephews (in Australia?), he was probably one of the oldest residents in the township of Ahaura, situated at the junction of the Ahaura and Grey Rivers. His letters provide a small insight into the life of Jewry on the West Coast of the South Island during World War One.

1. Ahaura [no date, but probably 1916 or 1917]. 2 pp, quarto, headed ‘Ahaura’, and signed at the foot ‘Sam. Samuels, Ahaura, Grey Valley, West Coast, New Zealand’; original folds; complete and legible. The letter discusses ‘the scarcity of things’ on the West Coast, and the high prices of various commodities, including even local produce; all of the young men are ‘at the War, a great many coming back crippled, not able to do any work at the coal mines’; the miners are making only 20/- per day and a strike is expected to be organised by the Labour unions; ‘I receive the Jewish Chronicle from a friend living in Westlands, also the American Hebrew from nephew S.M. Norton’.

2. Ahaura, May 3 1917. 1 page, quarto (incomplete, lacking second page). The letter mentions conscription, in particular the fact that only ‘duffers’, who have been passed unfit for service, are left behind to be the future generation; ‘In proportion to population N. Zealand has sent more to the front than any other country. The public want to stop more from leaving’; inflation means that ‘everything is double the price’; the ‘coal miners [are] striking, saw mills closing down, & all my Jewish friends have left this distant [place]’.