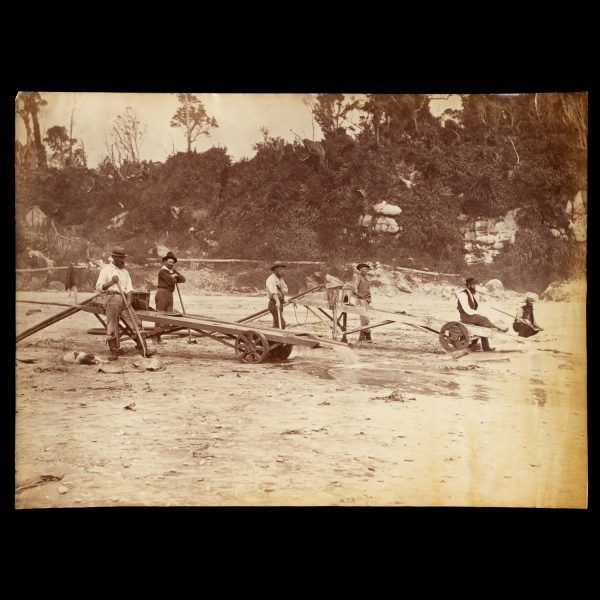 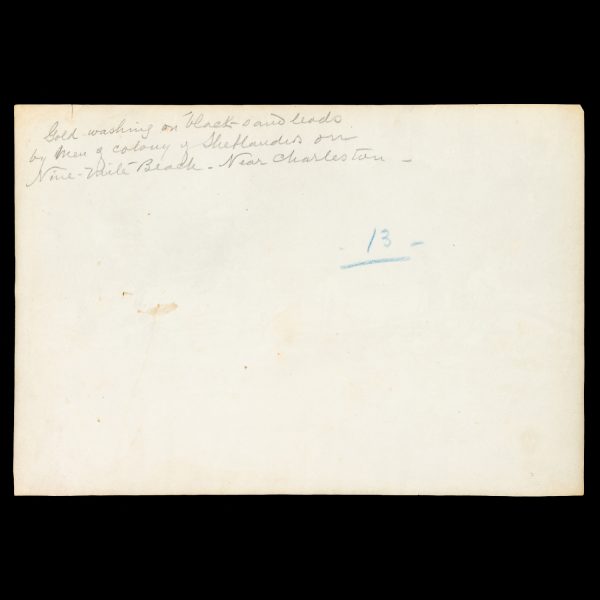 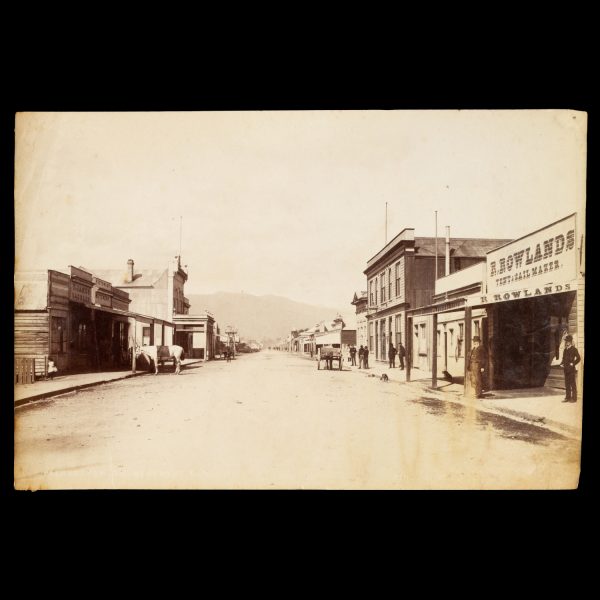 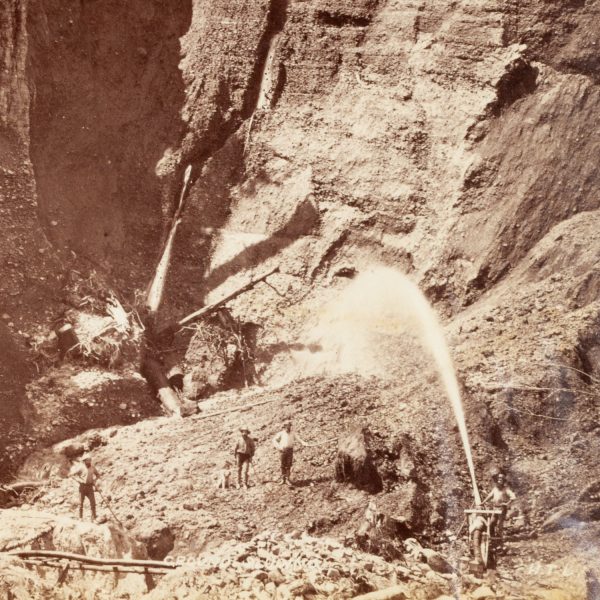 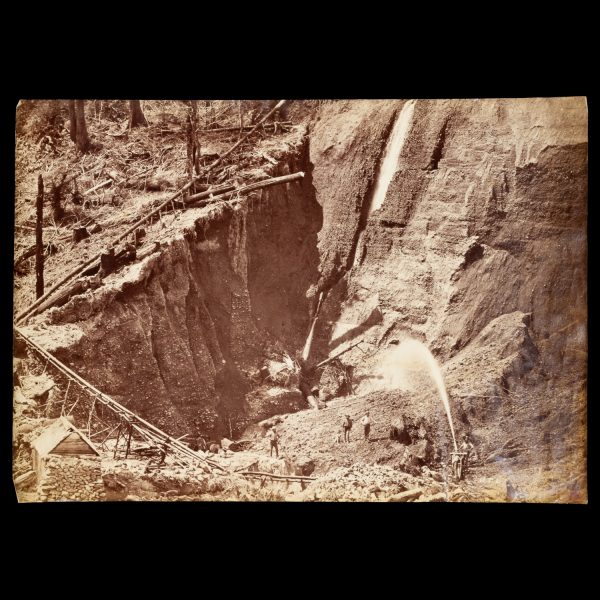 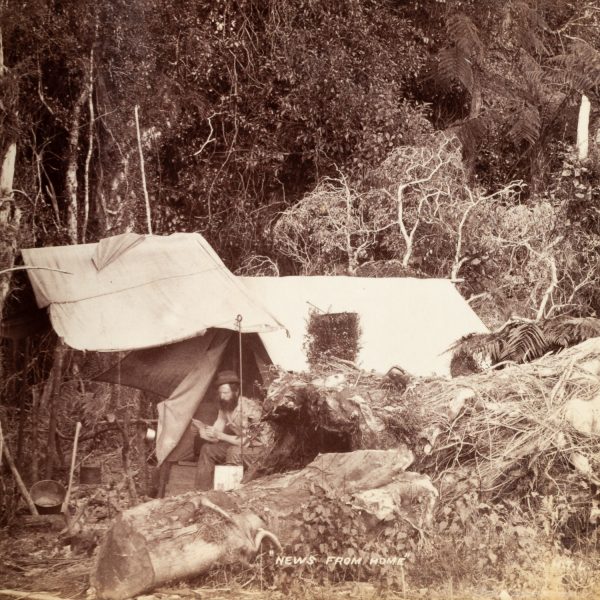 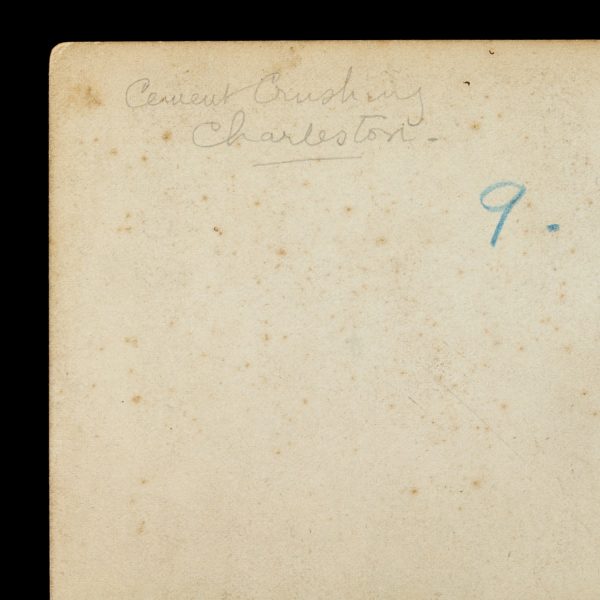 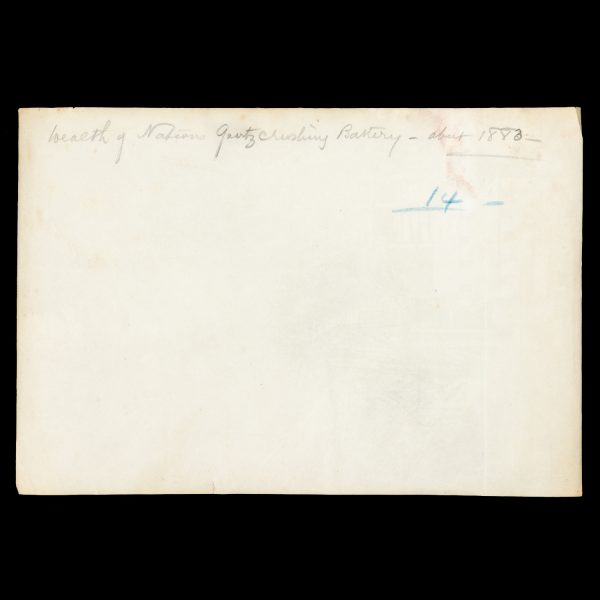 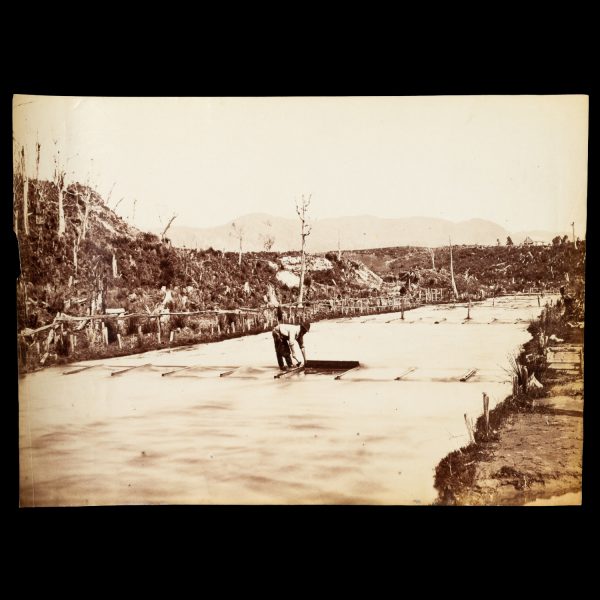 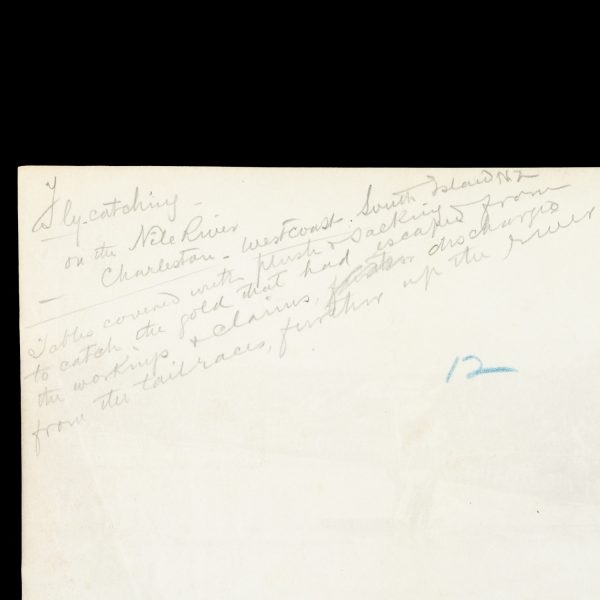 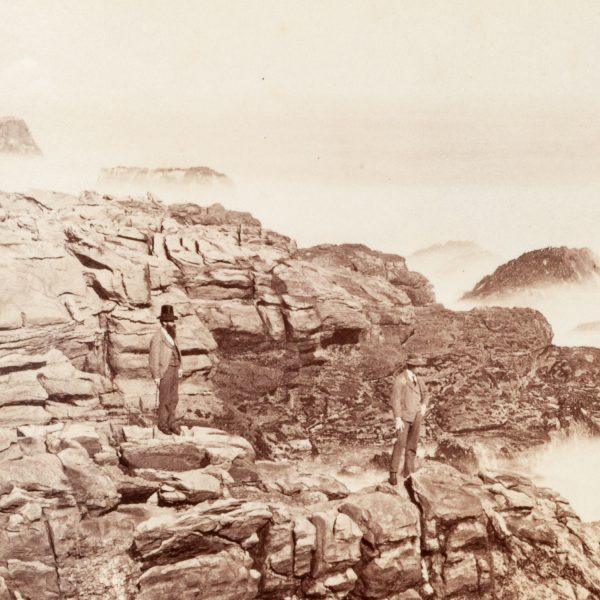 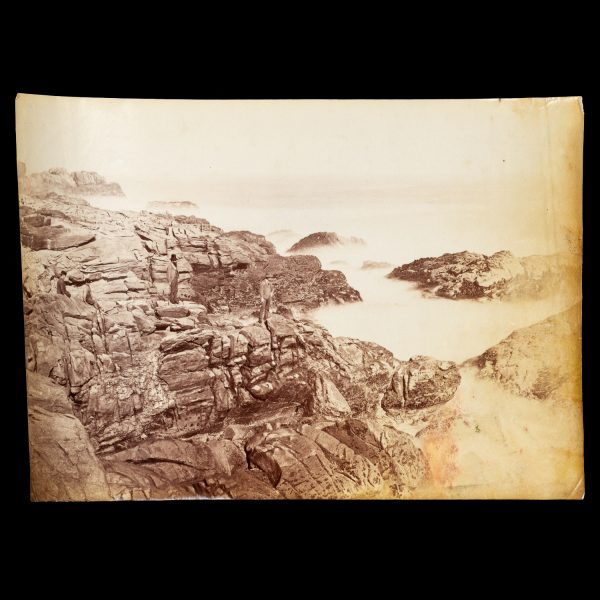 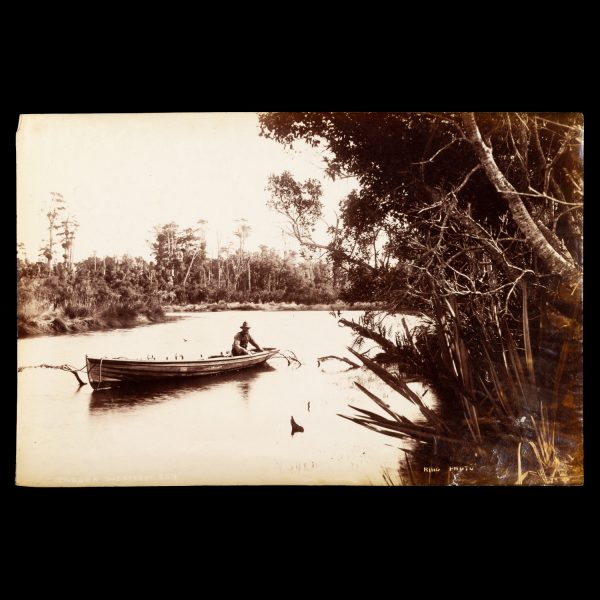 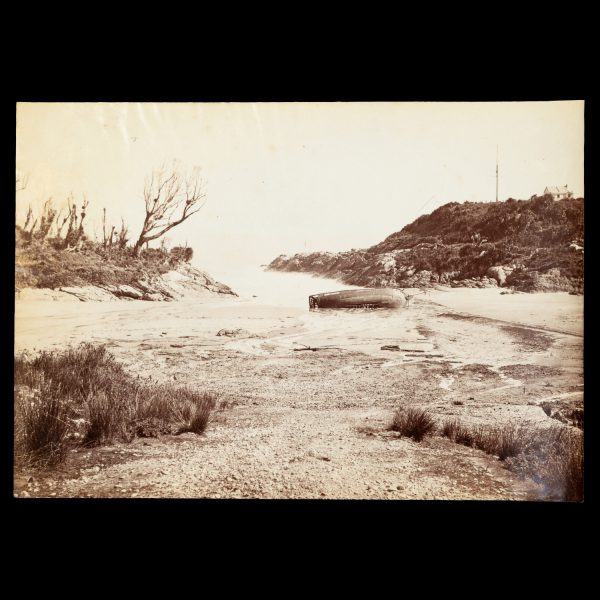 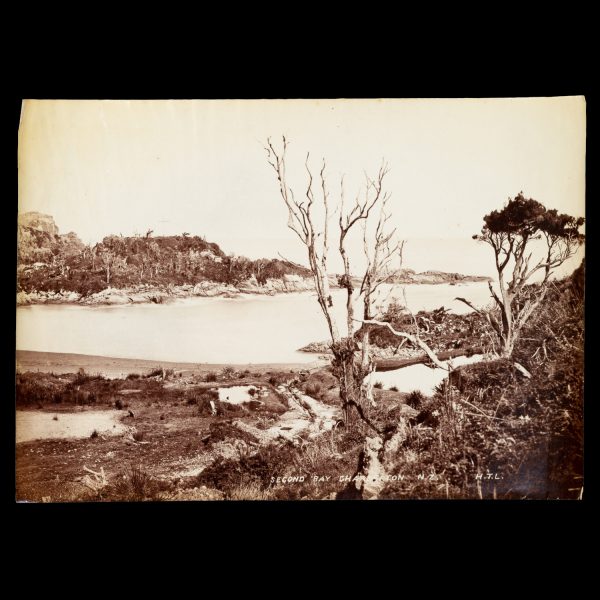 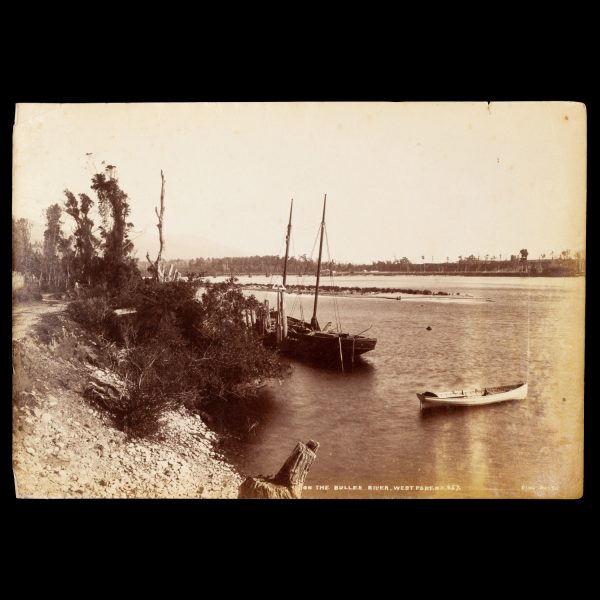 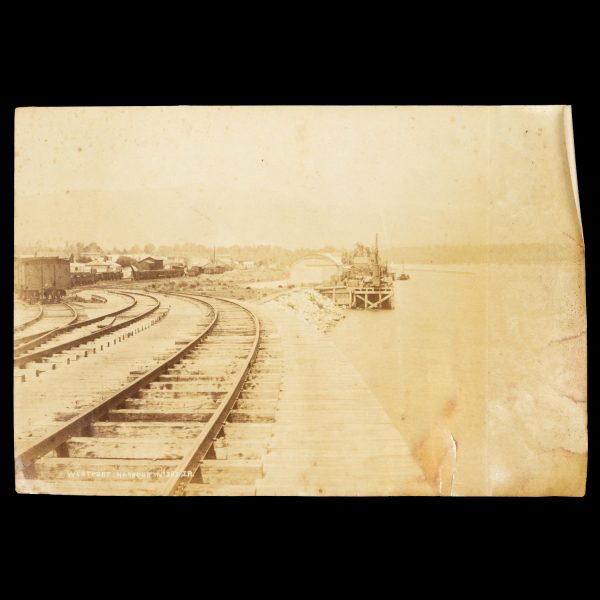 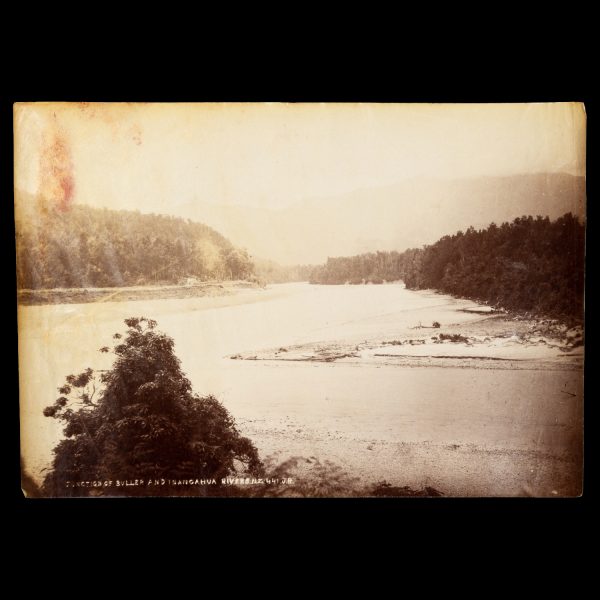 [NEW ZEALAND] Large group of photographic views taken in and around Wesport and Charleston on the West Coast of the South Island, including gold mining scenes. 1870s-80s.

Group of seventeen albumen prints; sixteen are unmounted, in formats 140 x 200 mm (x14) or 180 x 240 mm (x2); one is 100 x 138 mm, laid down on a cabinet card mount (110 x 165 mm); most have handwritten captions and photographer’s name or initials in the negative; all but one have additional captions in pencil verso in the hand of Westport schoolmaster Edward Blair Buchanan Boswell (1860-1933), father of New Zealand artist James Boswell (1906-1971); a few of the prints (notably the two largest) have short edge-tears or mild creasing, but the majority are in very good condition with excellent tonal range and clarity.

A highly significant photographic archive assembled in the 1880s by Westport resident E. B. B. Boswell. These photographs, dating to the late 1870s and 1880s, document gold mining activities, townships and landscapes in the Westport and Charleston area of the West Coast. Although most were taken by local photographers Henry Thomas Lock and James Ring (Lock’s seem to be earlier than Ring’s), the five by unidentified artists are probably attributable to either Lock or Herbert Henry Vorley, or possibly even to E. B. B. Boswell himself, who, according to his son James was a keen amateur landscape photographer (see below).

The archive comprises the following:

[Photographer unidentified]. Fly catching on the Nile River, Charleston, West Coast South Island NZ. Tables covered with plush & sacking to catch the gold that had escaped from the workings & claims, discharged from the tail races further up the river. (In pencil verso). 140 x 200 mm.

James Ring. On the Buller River, Westport, NZ. 857 / Ring Photo. (Inscribed in negative). The P.S. Result lying at Westport after the engines had been removed and placed in a new hull built in Railway Yard at Westport, about 1884-5. New vessel named P.S. Nile. (In pencil verso). 140 x 200 mm.

The following reminiscence of E. B. B. Boswell by his artist son, James, is quoted in an essay by Herbert Roth, James Boswell : a New Zealand artist in London, in Auckland City Art Gallery Quarterly, Number 65, December 1977:

‘”My father,” wrote Boswell in an aubiographical letter, “helped to create surroundings which made simple and acceptable the idea of being a painter. He was a skilful amateur watercolourist who did little work but kept up a passionate interest in the arts. The house he designed and built in Westport was very much influenced by Arts and Crafts Movement ideas which he absorbed from The Studio (he subscribed to it from its beginning and kept it as well as all the year books and special numbers). He designed all the furniture as well and had it made from New Zealand woods… He was addicted to books. Never threw one away. The house was full of them and I lived off them. My mother told me much later that, when they married, my father owed the local bookseller a debt larger than his year’s salary… This bookish world was the background to a lot of activity. He collected shells… He collected botanical specimens… He collected geological specimens, worked industriously as an amateur topographical photographer, designed furniture and made it in carved wood and beaten brass and round about April every year he took to watercolour painting (on a small scale). My mother claimed that these spells began and ended always on the same dates. As a result of these various interests he never persisted at anything for long enough to excel at it but he managed to create in his home a cultural circle which attracted people from all over New Zealand. It was much the same in Auckland – we moved there in 1917 and seemed to have an open house. Being a painter seemed to me the most natural and easy thing in the world, once I had persuaded the family that they didn’t need a doctor in the family”‘ (ibid., p.3).