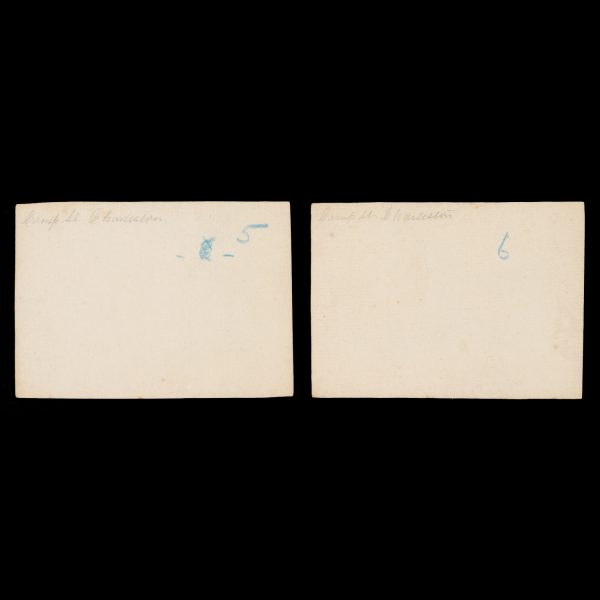 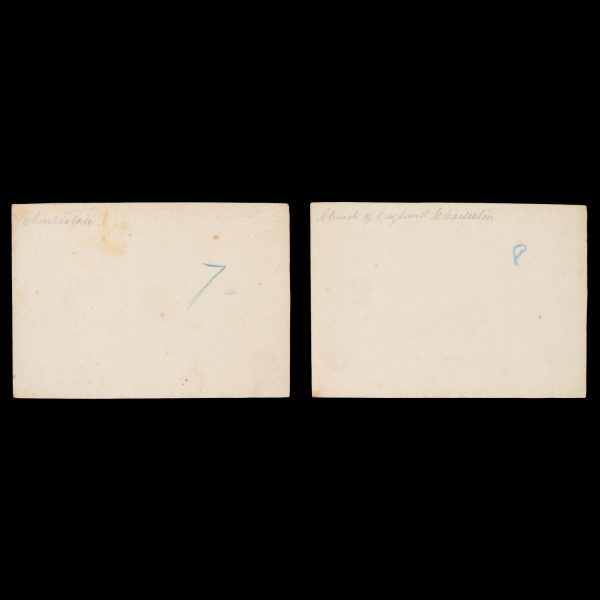 [NEW ZEALAND] Photographs of the gold rush townships of Charleston and Brighton, on the West Coast of the South Island, circa 1870.

Group of seven gelatin silver printing-out paper prints, all of which appear (on account of their exceptional clarity) to have been printed out from original late 1860s or early 1870s negatives at the beginning of the 20th century; six are in format 68 x 102 mm (approximately carte de visite size), and one is much larger (140 x 200 mm); all are unmounted and have identifying captions in pencil verso in the hand of Westport schoolmaster Edward Blair Buchanan Boswell (1860-1933), father of New Zealand artist James Boswell (1906-1971); the prints are in fine condition.

Attributed in the early 1900s by Westport resident E. B. B. Boswell to early West Coast photographer Herbert Henry Vorley, this group of important images documents the thriving townships of Charleston and Brighton at the height of the West Coast gold rushes, a little before or after 1870. There can be little doubt that these gelatin silver prints were taken from Vorley’s original negatives, and are not “second generation” prints (photographs of photographs). The whereabouts of Vorley’s negatives is, unfortunately, not known. Relatively few topographical scenes by Vorley appear to have survived, and he is probably best known for a small number of views of Reefton. We can locate none of the seven images offered here in New Zealand institutional collections online.

The inscriptions on the back of the photographs are as follows:

(140 x 200 mm) Brighton, Fox’s River. This was taken in the early 70s (or late 60s) of last century. All these buildings have long since disappeared. EBBB. Vorley was the name of the photographer.

Photographer and phrenologist Herbert Henry Vorley (1839-1880), the son of a wealthy London family, emigrated to Port Phillip in 1862. In Melbourne in February 1863 he married Adelaide-born Margaret Wood, who was just 17 years old. A few years later the Vorleys travelled to New Zealand at the commencement of the gold rushes on the South Island. They settled on the remote West Coast in 1866, where Herbert was active as a photographer in Reefton, Charleston and Westport from the late 1860s right through the 1870s. He and his family remained there until 1879, when the following article appeared in the West Coast Times newspaper, on 18 January 1879:

‘Mr Vorley, an old West Coast photographer, long and favorably known at Charleston, Westport, and Reefton, the other morning awoke to find himself famously rich. He received at Westport a direct cablegram from London, apprising him that through the death of a near relative he had succeeded to an extensive property. We congratulate Mr Vorley upon his good fortune, and trust that he will live long to enjoy it. He proceeds to Europe by the next outward mail steamer. The legacy is worth about £3000 per annum.’ (Canterbury Photography)

Vorley did not live to enjoy his new found wealth for very long: he died in November 1880, at the age of just 41, at his mother’s house in Russell Square, London – a little over a year after he and his family had arrived back in England.