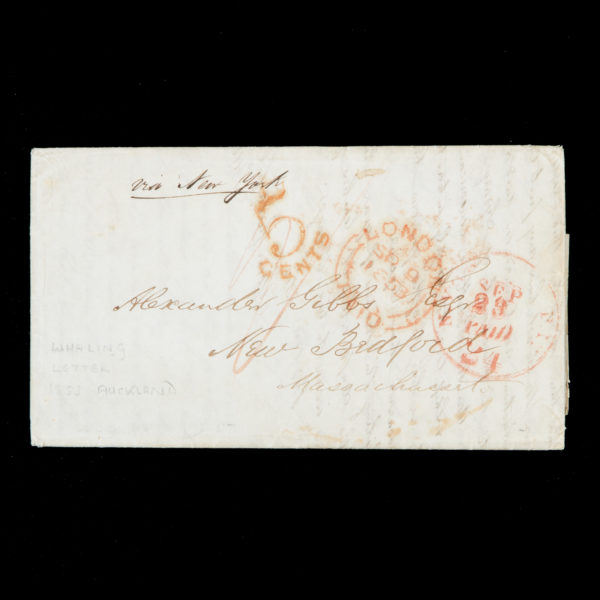 Bain & Burtt were Auckland shipping agents and merchants. The co-owner of the firm, James Burtt, was also American Vice-Consul in Auckland. In this previously unpublished item of business correspondence with the American owner of the whaling ship Jasper, we receive a very detailed insider’s view of the conduct and economics of the Pacific whaling trade in the early 1850s, as well as a contemporary account of the shipping crisis at Auckland, caused by the gold rushes in the Australian colonies, which was affecting New Zealand’s trade in 1852-53. The letter also provides a glowing account of the port of Auckland and describes its advantages over alternative ports on the coast, before closing with a determined attempt to establish and develop ties – through Alexander Gibbs – with export merchants in New Bedford, who might benefit from Bain & Burtt’s experience and expertise in the lucrative Auckland import market.

The letter advises Alexander Gibbs of the arrival of his barque Jasper at Auckland harbour on 28 December 1852, “from the Whaling Grounds with 750 to 800 barrels of sperm oil on board. On his arrival here Capn. Rolch placed the agency of the vessel in our hands to procure an outfit for 12 or 14 months in equipping her with which we have used our best endeavours to procure the most suitable articles at the most reasonable prices and we trust that from our experience in furnishing such articles and our knowledge of the articles themselves, that our services will meet your approval. For amount of disbursements here Capn. Rolch has drawn upon you in our favour for the Sum of £820:16:0 which Bill we have taken at the Current Rate of Exchange for American Whaler’s Bills namely 1% disct. Capn. Rolch has also granted us Bill of Lading on 140 Barrels Oil as Collateral Security for Bill of Exchange which we have transmitted thro’ our London Agents Messrs. John Gladstone & Co. & beg  the favour of your attention to the same on presentation. We regret the low rate of disct. … for Bills on America but since the gold discoveries of New South Wales, Bank Bills on London always those preferred here have been ranging from 6 1/2 to 9% disct. Owing to there not being any Vessels on the berth for London at present Sperm Oil has receded to £62 – £63 at which rate we decided it better for Capn. Rolch to draw at 12 1/2 % disct. than sell. Had Freight been procurable for London £65 per ton could have been obtained, but the only vessel loading when the “Jasper” arrived had all her cargo engaged & none other is offering as yet. In arranging with reference to payment of recruits, in purchasing the recruits themselves, & in giving his close attention to everything connected with his outfit we have great pleasure in reporting most favourably to you of Capn. Rolch’s application which has been of very material assistance to us in keeping expenses under & our obtaining always the most suitable articles, two objects we constantly keep in train & make our study to carry out, but which with many Captains we find it a very difficult task to perform, hence our appreciation of any who go hand in hand with us to do so.

Owing to the numerous advantages offered by this Port, it is now becoming a great resort for Whalers to recruit. Fresh supplies, being equally cheap & in many instances cheaper than on the coast. Provisions of every kind always are lower, & more readily procurable, than at any of the out ports, & stores & shipwrights work &c. can be executed on terms equally reasonable if not more reasonable than any other port in the Pacific. For articles of trade & for Oil a better price can always be obtained than at the Bay of Islands or at Monganui or any of the other coast ports. The chief difficulty the Port has hitherto laboured under has been the want of proper Charts for the Houraki Gulf, to obviate which we have had explicit sailing directions drawn up which which will suffice for a vessel making for the port under any circumstances & will we trust be found useful to many in want of a good recruiting port. Owing to the supposed discovery of Gold in the immediate neighbourhood of Auckland & the absence of proper Legislative authority for preventing & punishing deserters from whale ships – there has been considerable difficulty in retaining men in several of the vessels which have called here, but when the ship gets ready for sea again, men are then plentiful enough. Several of the “Jasper’s” hands deserted – 2 or 3 of them were brought back by the police & Capn. Rolch stopped 3 or 4 the day previous to his sailing – they went on board at their time agreed & the “Jasper” left with her full complement again … The Gold Field so-called having proved very unproductive & the Government having assured us that proper steps are immediately to be taken to punish deserters & protect the interests of the master & owners, once this law takes effect there will be very little desertion here, & owing to increasing number of Vessels arriving at the same season, men will be more plentiful than ever. We are desirous of all these matters being made known fully in New Bedford as we feel assured that the port is one which will always be its own recommendation. We are also anxious to open up a correspondence with any mercantile houses in your port to whom our services could be useful here; as not only could we procure profitable employment for shipping either in the Colonial or English trade – but we could also procure oil freights for several vessels for your own & other whaling ports in the States – were suitable vessels here in January every year. Several cargoes could have been shipped home this season to the United States, had freight been procurable, and as this is a matter which is equally important to the Whalemen as to the Merchantmen, we trust it will not be overlooked next year. This is an opening & a lucrative market for assorted Cargoes of American goods – particularly for such articles as Dungaree, Grey Drilling, Canvas, Pitch, Resin, Tubs, Pails, Brooms &c, any arrival of which coming in now would be to a bare remunerated market … All business transactions are carried on under the same regulations as those which regulate the merchants of Sydney, Hobart Town & the Australian Colonies generally. Our Mr. Burtt is American Vice-Consul for the Port and as merchants & ship agents largely interested in the English & Colonial trade, we beg to offer you our best services here whenever occasion may require….”