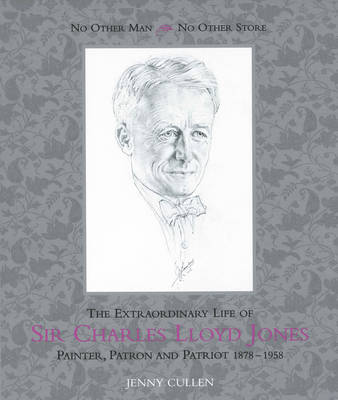 No Other Man No Other Store : The Extraordinary Life of Sir Charles Lloyd Jones: Painter, Patron and Patriot 1878-1958

Melbourne : Macmillan, 2013. Quarto, boards in dustjacket, pp. 239, illustrated. New cop of an out of print title.

Sir Charles Lloyd Jones always wanted to be an artist and, in his youth, studied painting for six and a half years, first at the Julian Ashton Art School in Sydney and then at the Slade in London. As grandson of the founder of David Jones Ltd., he eventually returned from London to play many important roles in the firm – firstly by revolutionising its advertising and later as Chairman of the Board for almost 40 years until his death in 1958. Thought of as a friend by the firm’s employees, he encouraged sporting and social activities, installed health care facilities and took a personal interest in their families’ welfare in times of war or depression. He also instigated the expansion of the firm into new purpose-built architectually significant buildings in Sydney’s business centre and introduced Australia’s first mail-order service with delivery to regional NSW by air. If his innovative approach to many areas of retailing has become legendary, his contribution to the arts in Australia was equally profound. He shared with founder Sydney Ure Smith the publication of Art in Australia and The Home, both magazines of extreme importance to Australia’s cultural development. He was appointed first Chairman of the Australian Broadcasting Commission and an initial director of the Australian National Travel Association, now known as Tourism Australia. He became a long-term Trustee of the Art Gallery of NSW, established David Jones’ Art Gallery and through the Gallery and Art in Australia helped bring local and overseas artists to increasingly arts-interested Australian audiences. All the while, he continued to paint – albeit on a very much part-time basis. This biography, written and researched by Sydney author Jenny Cullen and introduced by Professor Geoffrey Blainey, provides an exciting documentation of the life of a remarkable citizen, described in the title of the book as ‘Painter, Patron and Patriot’.