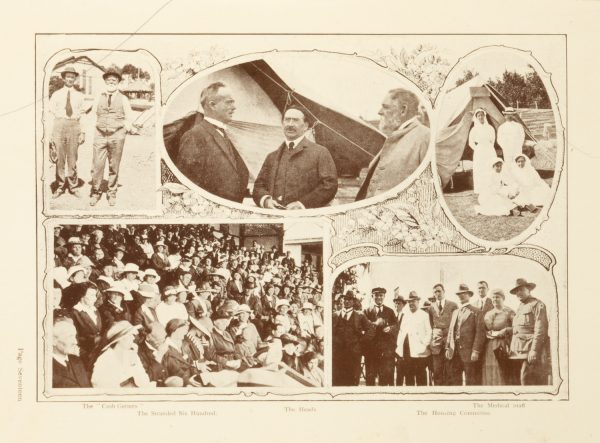 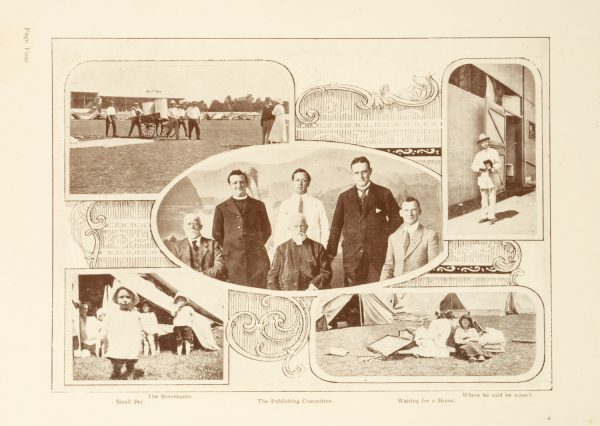 [Adelaide : Camp Publication Committee, 1919]. Quarto, gilt-lettered wrappers, string tied (small tape repairs to spine), pp. 22, illustrated with photographs of camp life, a couple of pencil marks. Includes essays, poems, photographs, songs and other records of daily life. The title of the souvenir comes from ‘the monotonous verdict of our common friend, the doctor. If there is one salutation with which we shall in years to come greet those who were with us during that week, it will be “Normal”. Already it has been raised to the dignity of a password.’- the Foreword.

A very timely insight into the experience of forced isolation that South Australians returning to Adelaide from Melbourne were required to endure at the outbreak of the Spanish Influenza on Australian shores in 1919.

‘In 1919 the Spanish Flu finally hit Australia’s shores. The epidemic had originally started in 1918, borne around the world by soldiers returning from WWI. During the course of the outbreak it affected 500 million people and claimed more lives than those killed in the Great War. Also known as ‘pneumonic influenza’, it initially caused symptoms not unlike a typical influenza, but it would eventually cause patient’s lungs to fill with fluid and limit their breathing. Unlike most viruses, it primarily affected healthy young adults with pregnant women being the worst affected.

When the flu came to Australia each state tried to keep it contained, resorting to closing borders and ports and setting up quarantine camps to keep patients isolated from the healthy populations. After the initial outbreaks in New South Wales and then Victoria, South Australia was officially declared infected on the 8th of February. To help manage the influenza, and to keep those who were infected away from other patients, the Jubilee Exhibition Building was converted to an Isolation Hospital. Opened in 1887 the Exhibition Building was built to celebrate the colony’s 50th year as well as Queen Victoria’s Jubilee. After the exhibition, the building continued to be used for a variety of purposes including the Royal Adelaide Show, balls, concerts, exhibitions and events.

Due to the closing of the state borders, many holidaying South Australians found themselves stranded in Victoria.  On the 26th of February 1919, after an extended period of uncertainty, arrangements were finally made for non-infected South Australians to be transported by train from Melbourne to Adelaide. Their destination was the Jubilee Oval, picked as a prime location for a quarantine camp due to its close proximity to the Exhibition Hospital. Jubilee Oval had originally been created in 1895 as a sporting ground, and also hosted parts of the Royal Adelaide Show…’ from THE GREAT PICNIC: 100 YEARS SINCE THE SPANISH FLU IN ADELAIDE – the full article can be read on the University of Adelaide’s website https://blogs.adelaide.edu.au/special-collections/2019/07/10/the-great-picnic-100-years-since-the-spanish-flu-in-adelaide/