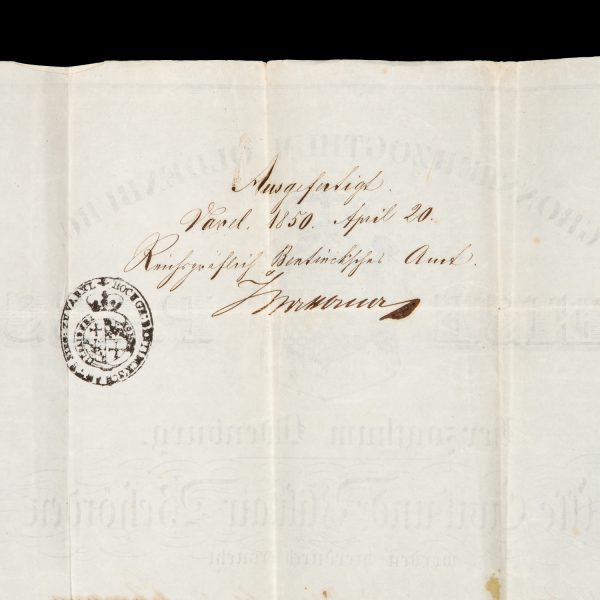 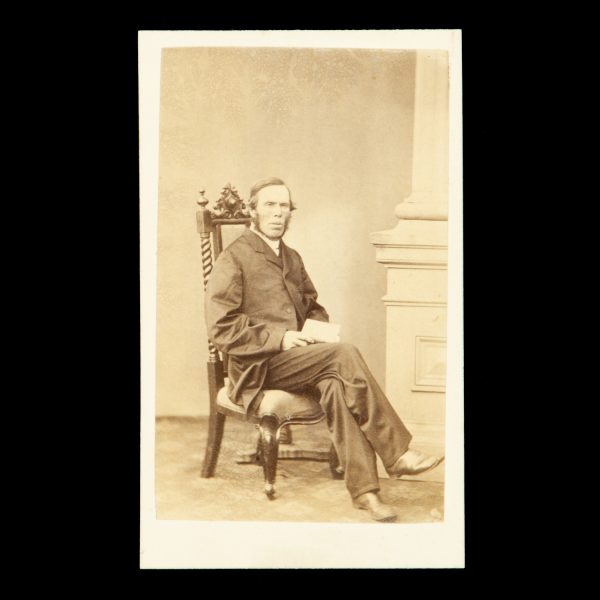 Passport issued by the Grand Duchy of Oldenburg (Lower Saxony) to Eilert Lehmann, for his voyage as an emigrant to South Australia. Dated 20 April, 1850.

[Oldenburg, German Confederation] : Grossherzogthum Oldenburg, 1850. Large folio (410 mm) bifolium, lithograph printed on the first side only, with at the head the armorial crest of the Grand Duchy of Oldenburg and the legend in large font Grossherzogthum Oldenburg. Reise Pass; with manuscript entries by a public servant recording the issue of the pass to Seaman (Schiffer) Eilert Lehmann, of Seghorn (Oldenburg), on 20 April 1850; the pass allowed Lehmann to travel from Oldenburg via Bremerhaven to Port Adelaide (South Australia), with the free right of return to the municipality within three years from the issue date; in the column on the left hand side of the document is a list of Lehmann’s personal details and physical characteristics, including his religion (Lutheran), age (28), height (5 ft 8), hair colour (dark blonde), eyes (blue), nose (straight), teeth (sound), facial hair (dark), face shape (oval) and distinguishing marks (none); at the foot of the document is the official stamp of the Grand Duchy of Oldenburg and signature of an officer of the Duchy’s Police Department, and on the verso is a counter-seal and endorsement by a high-ranking public official; old vertical and horizontal folds, some light foxing, but the waxy paper is otherwise clean and not at all brittle: a remarkably well preserved document. [TOGETHER WITH] An 1860s albumen print photograph in carte de visite format (105 x 63 mm) of a seated gentleman whom we believe to be Eilert Lehmann. Although there is no photographer’s imprint, the photograph is attributable to Stephen Nixon as the same chair and pillar feature in portraits taken in Nixon’s Kapunda studio (from 1865). Nixon is also known to have visited Callington as a travelling photographer in 1863. The photograph was sourced with the passport and shows a man probably in his mid to late 40s with features that match Lehmann’s passport description.

A rare pre-gold rush travel document issued to a German-speaking emigrant for his journey to Australia.

Eilert Lehmann (1821-1874) was born in Seghorn in the Grand Duchy of Oldenburg in Friesland, Lower Saxony, close to the port of Bremerhaven, from where he embraked on his voyage to South Australia early in 1850. His passport records him as Schiffer (seaman), which suggests that he worked his passage to Port Adelaide.

After his arrival in Australia’s most newly established colony, South Australia – which over the coming decades would become the new home of thousands of immigrants from German-speaking parts of Europe – Lehmann first settled in the Barossa Valley near Hahndorf. He is recorded as a member of the congregation of Hahndorf’s St. John German Protestant (i.e. Lutheran) Church. In 1857 Eilert he married Emma Christiana Elisa Reinholtz (1835-1923). Emma was born in Rostock in Mecklenburg (West Pomerania), and had emigrated from the port of Hamburg to South Australia on the barque Sophie in August 1850, just a few months after Eilert had sailed.

Around 1860 Eilert took his wife and young family (see below) a little way south to settle on the Bremer River on the eastern slopes of the Adelaide Hills, near the township of Callington, where copper had recently been discovered. A notice in The South Australian Advertiser, 3 February 1860 records his purchase of land from Friedrich Sandmeyer in the Monarto district just north of Callington. Eilert made his living there, as he had done in Hahndorf, as a farmer. In the Evening Journal (Adelaide) on 5 January 1870, he placed the following ill-tempered notice:

‘ALL GOATS, PIGS, DOGS, AND POULTRY found TRESPASSING on Section No. 2012, Hundred of MONARTO, near Callington, will be DESTROYED, and HORSES and CATTLE IMPOUNDED. EILERT LEHMANN. Junction of Mount Barker.’

Eilert and Emma are buried together in the Callington Cemetery, alongside their daughter Julie.