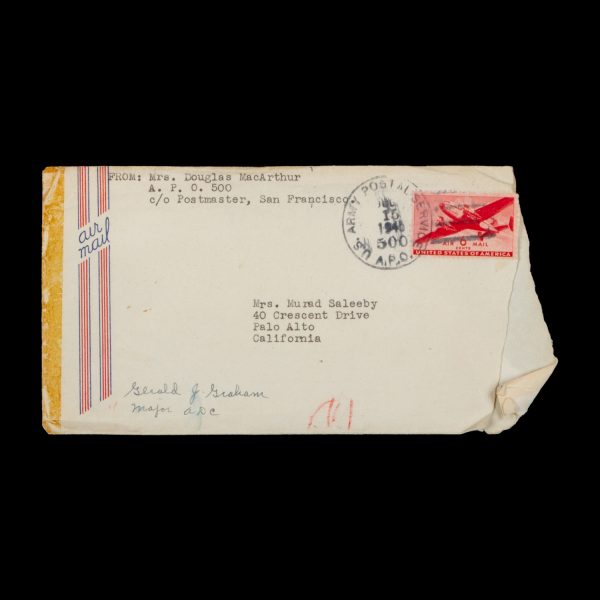 In this letter, written some 8 months after General MacArthur’s return to the Philippines in October 1944, but still one month before V-J Day, Jean MacArthur writes from Manila to a friend in California, Mary Ann Saleeby, wife of mining industrialist Murad Saleeby, who had, along with her daughters and husband, remarkably survived the Japanese occupation of the Philippines. After giving news about mutual acquaintances, she alludes to the situation in the city, so recently devastated in the bloody and horrific Battle of Manila: ‘We are very comfortably settled now in our home. It still seems like something in a terrible nightmare – the destruction around us. It just isn’t Manila to me, but you saw for yourself so you can understand. Love to you, Murad and the girls and thanks for the sweet things that you said about “my General”….’

Jean Marie Faircloth (1898-2000) was the second wife of U.S. Army General of the Army Douglas MacArthur. Born and raised in Tennessee, she inherited a large fortune when her father died, and travelled extensively. In 1935, whilst en route to Shanghai for a holiday, she met General MacArthur aboard the SS President Hoover. She disembarked with MacArthur at Manila, where the pair began a permanent relationship, despite her being 19 years younger than he. They married in New York City on April 30, 1937, during General MacArthur’s trip home to build support for the defence of the Philippines. This was to be MacArthur’s last trip to the mainland United States for the next 14 years, until he was relieved from duty by President Truman.

MacArthur described Jean as his ‘constant friend, sweetheart, and devoted support.’ She was with her husband when the Japanese had attacked the Philippines in December 1941, and went with him to the island of Corregidor in Manila’s harbour. Even when the island was attacked, she refused to leave her husband, and only when President Roosevelt ordered the MacArthurs to leave did they go to Australia. Jean rejoined her husband in Manila as soon as the Japanese forces had been defeated there in March 1945. The couple had one son, Arthur MacArthur IV (b.1938), and they remained married until Douglas’ death in 1964.