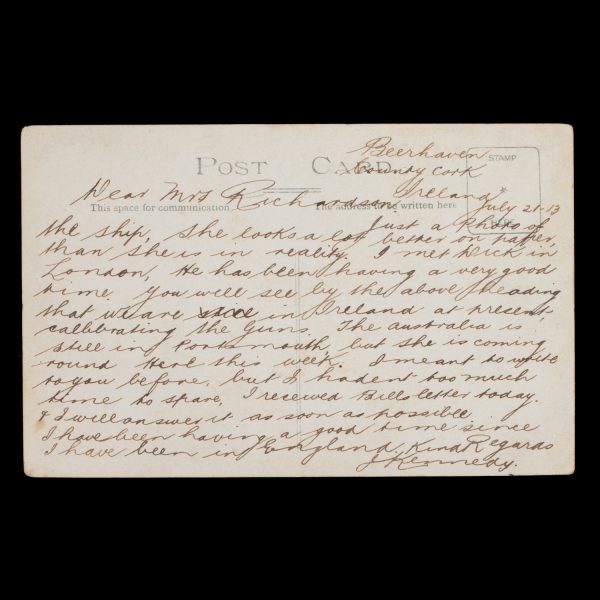 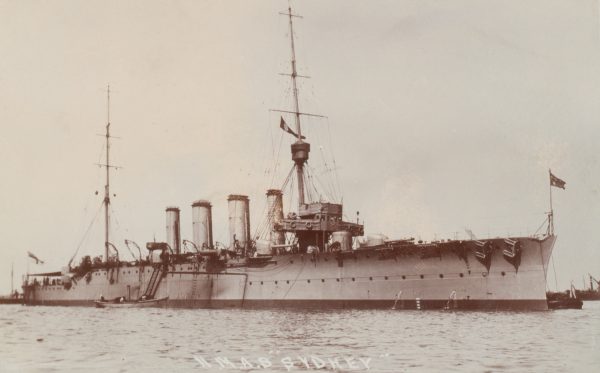 Photograph of HMAS Sydney, destroyer of the German cruiser Emden, taken in 1912-13.

Silver gelatin photograph printed on card stock, 87 x 137 mm, manuscript caption in negative ‘H.M.A.S. “Sydney”‘; verso with handwritten message signed ‘J.Kennedy’, headed ‘Beerhaven, County Cork, Ireland, July 21-13’, addressed to a ‘Mrs. Richardson’; the contents of the message clearly indicate that the writer was associated with the design and outfitting of the Sydney: ‘Just a photo of the ship, she looks a lot better on paper than she is in reality … You will see by the above heading that we are still in Ireland at present, calibrating the guns. The Australia is still in Portsmouth, but she is coming round here this week’; in fine condition.

The Chatham-class light cruiser HMAS Sydney was launched in Glasgow on 29 August 1912. The present photograph was probably taken around the time she was commissioned into the RAN on 26 June 1913. The Sydney arrived in Albany, Western Australia on 19 September 1913. On 9 November 1914 Sydney famously defeated and destroyed the German cruiser Emden in the Battle of Cocos, a major turning point in the Asian and Pacific theatre in World War One.