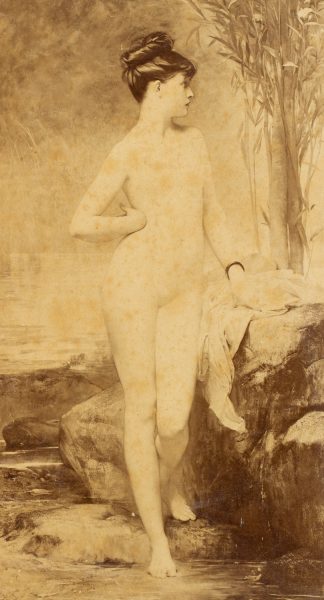 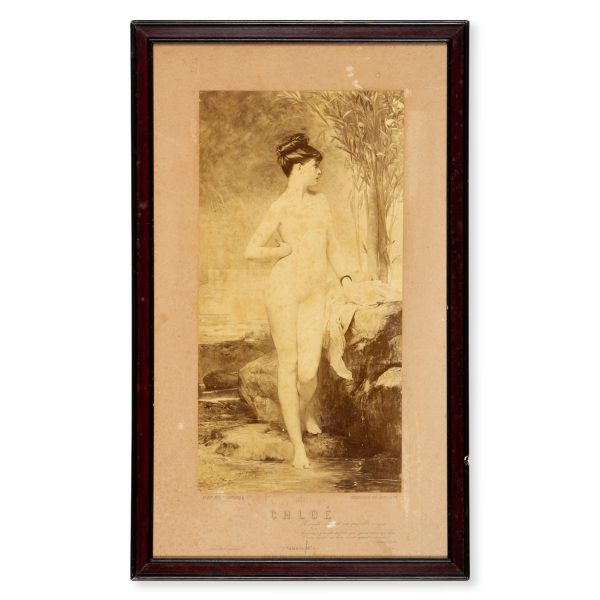 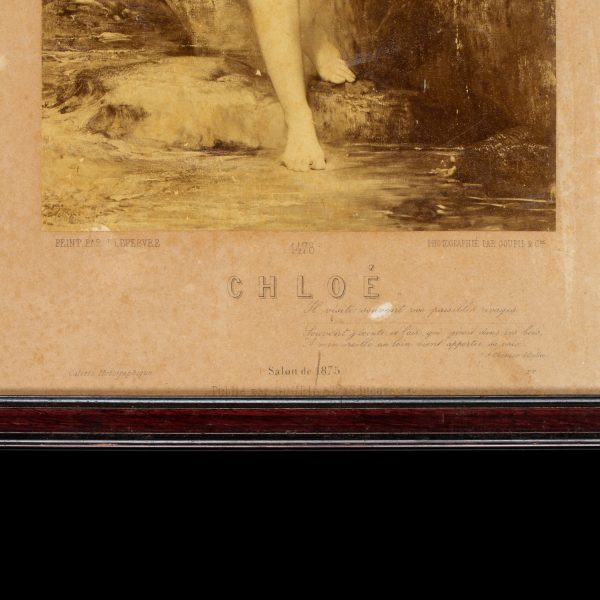 Photograph of the oil painting “Chloé” at its first showing at the Paris Salon, 1875.

The beautiful young model who posed for French artist Jules Joseph Lefebvre in his evocation of a pastoral idyll from classical antiquity was a 19-year-old Parisienne identified only as Marie, who is reputed to have committed suicide out of unrequited love at the age of 21. Since 1909, when Henry Young and Thomas Jackson first displayed her in the bar of their hotel on the corner of Flinders and Swanston Streets, Chloé has been a Melbourne icon, in turn condemned, romanticised and fetishised. But the painting’s association with Australia goes back further than that: after its first showing at the Paris Salon of 1875, where it won Lefebvre the prestigious Gold Medal of Honour, it was brought to Australia and exhibited in the French gallery at the Sydney International Exhibition in 1879, and again at the Melbourne Exhibition the following year, winning a gold medal at both events. Chloé was then purchased by Dr. Thomas Fitzgerald of Melbourne, for 850 guineas – an astronomical sum for the time, particularly in the Australian colonies. In 1883 Fitzgerald loaned the painting to the National Gallery, on the understanding it would be returned to him after his proposed three-year visit to Ireland. However, its full frontal nudity proved scandalous in the puritanical atmosphere of Melbourne society, and after only three weeks the Gallery was forced to bow to pressure from the Presbyterian Assembly: Chloé was essentially banned from public display in Melbourne, and Fitzgerald was obliged to send the painting to Adelaide for safe-keeping during his absence from Australia.

From the late 1880s until his death in 1908, Chloé hung in Fitzgerald’s Lonsdale Street residence – even though he was forced to move her from the front room to the back of the house after complaints from prurient passers-by. The painting was acquired from Fitzgerald’s estate at auction for £800 by collector and publican Norman Figsby Young in 1908. Having been on permanent display in Young & Jackson’s Hotel since 1909, Chloé has long been synonymous with this famous Melbourne landmark, and the painting itself has played a significant part in the cultural and social history of the city.