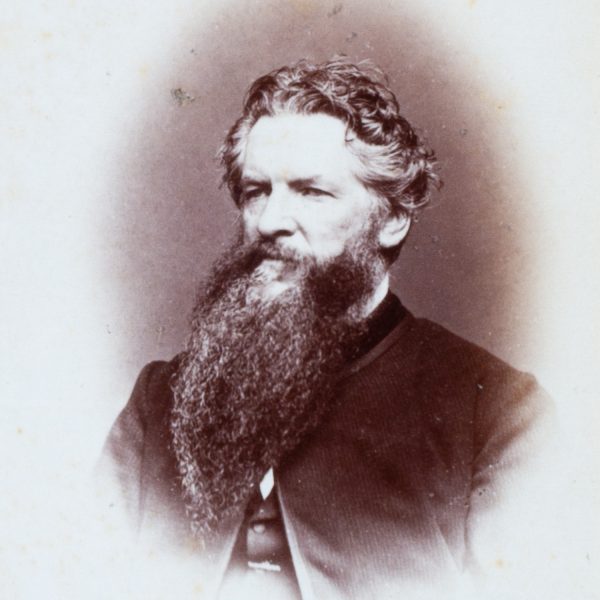 The distinguished Dr. Motherwell was medical officer at Port Arthur penal establishment in Van Diemen’s Land in the 1830s and 1840s, before later becoming one of the most prominent figures in Melbourne’s early medical fraternity. The State Library of Victoria holds the only photograph of Motherwell in Australian collections (Accession no. MS 1540), taken at least a decade later than the present photograph. (The SLV catalogue entry records his middle name Bridgnorth, in error).

The following obituary for Motherwell appeared in the Melbourne newspaper The Argus, 13 April 1886:

‘DEATH OF DR. MOTHERWELL. Dr Motherwell died at his late residence, 107 Collins-street, yesterday, after a very long illness. He had attained the advanced age of 71 years and for some months past had been in a very infirm state, with indications that his constitution was gradually giving way. For many weeks prior to his death he may be said to have been slowly dying having scarcely partaken of any food for weeks at a time. Although physically weak he retained his mental powers and cheerfulness until the last and was fortunate in being comparatively free from bodily pain. Dr James Bridgeham Motherwell, an M.D. of Glasgow and a Licentiate of the Royal College of Surgeons of Ireland, was bom in the county of Sligo Ireland, and came out to this part of the world nearly half a century ago. He practised for some time in Tasmania where he held an official position as medical officer at the convict settlement of Port Arthur. He subsequently came to Victoria and commenced practice in Melbourne where for many years he maintained a leading position in the medical profession. He became one of the phsyicians of the Melbourne Hospital soon after the foundation of that charity, and he remained connected with it until his resignation quite recently. He took part in the formation of the first medical societies in this colony, and when the present Medical Society was formed in 1855, by the amalgamation of two rival societies, he took a conspicuous share in arranging the details and two years later, he was elected its president. The Australian Medical Journal, which was started about the same time as the amalgamated society, occupied much of his attention, and he was for a long time one of its editors and a principal contributor to its pages. In 1856 he was appointed one of the members of the Council of the University, then only just formed, and he held this ofiice until last year. He was also elected an examiner in medicine under the special regulations. He was an original member of the Medical Board of Victoria and when the board was re-formed by a vote of the whole profession about 13 years ago he was elected upon it by overwhelming numbers. Although his health had, for several years, been very precarious, and his eyesight had failed him, he kept up a fairly active performance of the duties connected with these several offices and he resigned them only when he felt himself unequal to their fulfilment. He enjoyed the complete confidence of his medical brethren, and consequently at one time did a very large consulting practice. His heart, however, was in his profession, and although one of the best known of our old colonists, he never undertook any public functions not associated with the science to the cultivation of which his life was devoted. His death causes the removal of another of the social landmarks by which we trace the connexion of the present epoch with the early historic time of this colony. His house in Collins Street has been for a very long period on of the most conspicuous features of the medical quarter of this city, and he will always be remembered kindly, both by those to whose sorrows he so successfully ministered, and by his associates in the brotherhood of which he was an honoured member.’