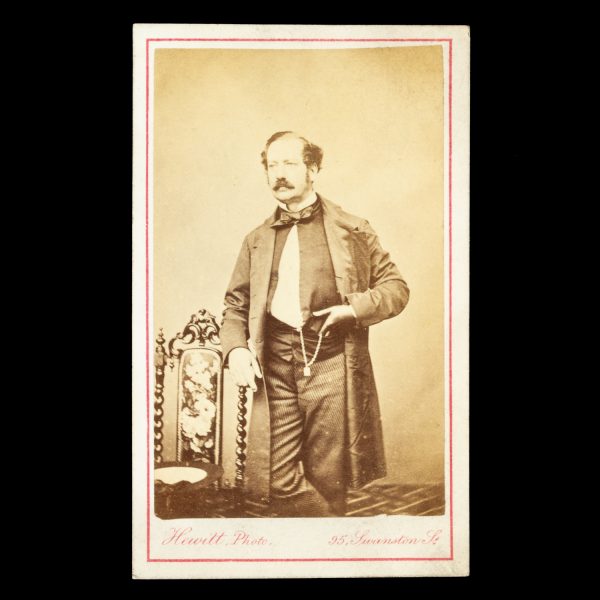 The great Irish-born Shakespearean actor Gustavus Vaughan Brooke (1818-1866) was a significant figure on the Australian colonial stage from the time of his arrival in Melbourne early in 1855 up until May 1861, when he returned to England. Although his performances in Sydney, Adelaide and Hobart made him a popular theatre personality in those cities too, he won a special place in the hearts of theatre-goers in Melbourne and on the Victorian goldfields – despite his struggle with chronic alcoholism. Having been booked by George Coppin for another two-year Australian tour in 1865, Brooke drowned en route from Plymouth to Melbourne in February, 1866, his last words reputedly being ‘Give my last farewell to the people of Melbourne.’

This full-length portrait of G. V. Brooke was probably taken in England in 1865. It was published in Melbourne by F. C. Burman as well as by Charles Hewitt, the likely original intention of both entrepreneurs being to sell the carte de visite in commemoration of what would have been Brooke’s triumphant return to Melbourne; as it transpired, once news of the actor’s untimely death reached Melbourne the image instead became a souvenir of his all too brief life.