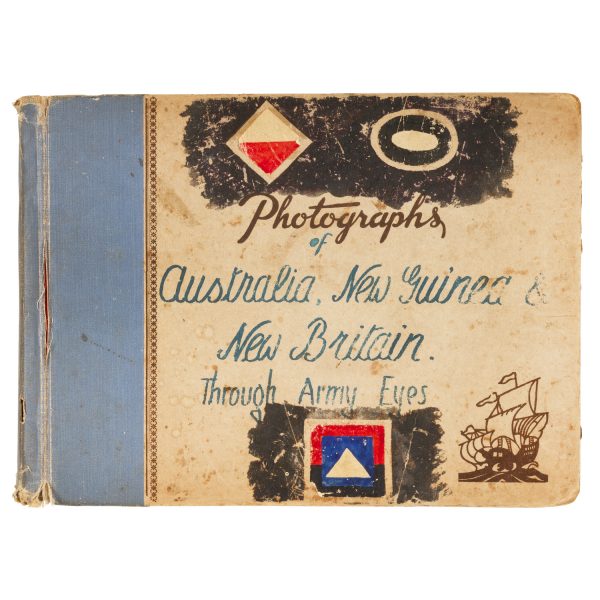 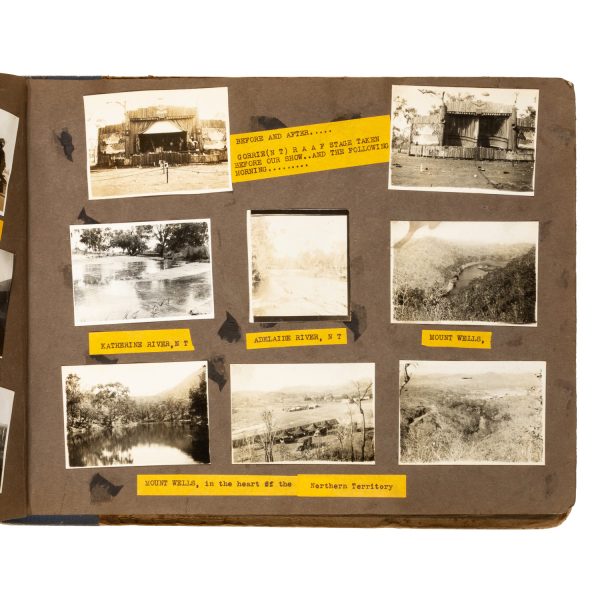 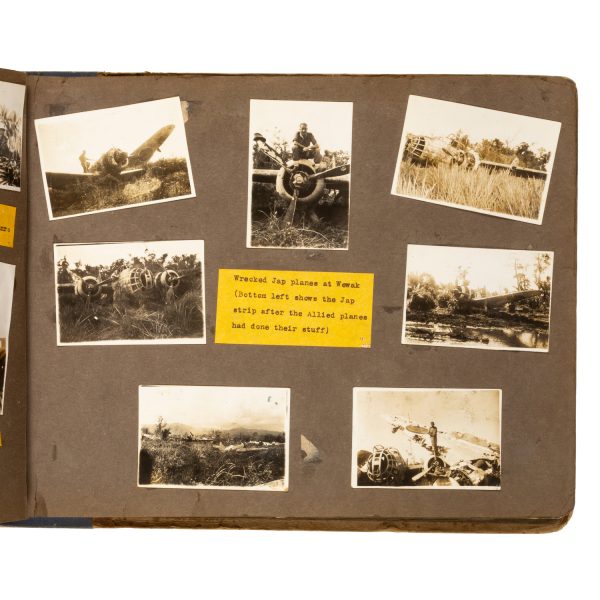 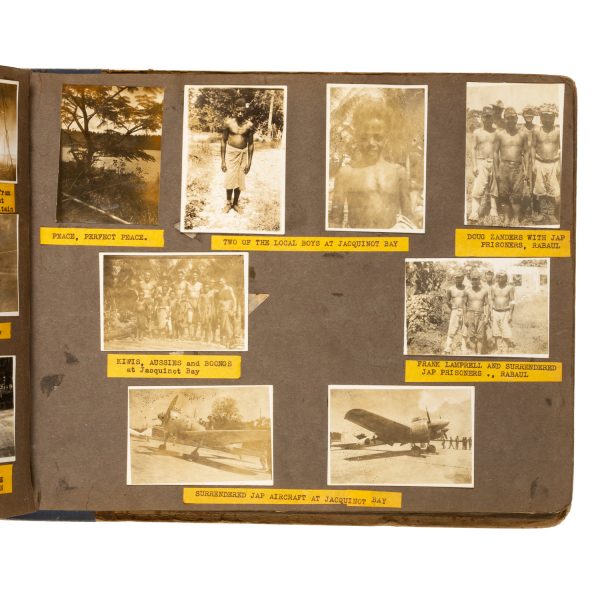 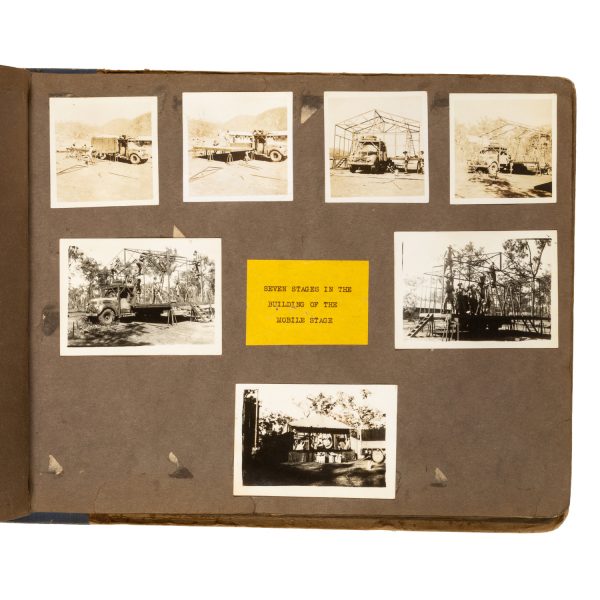 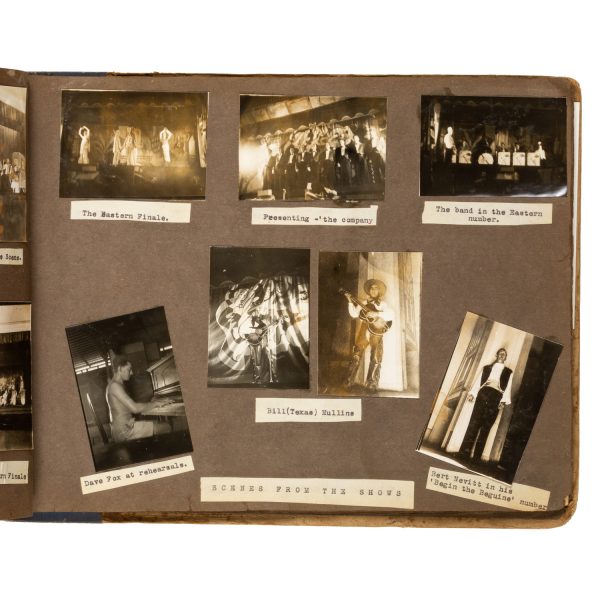 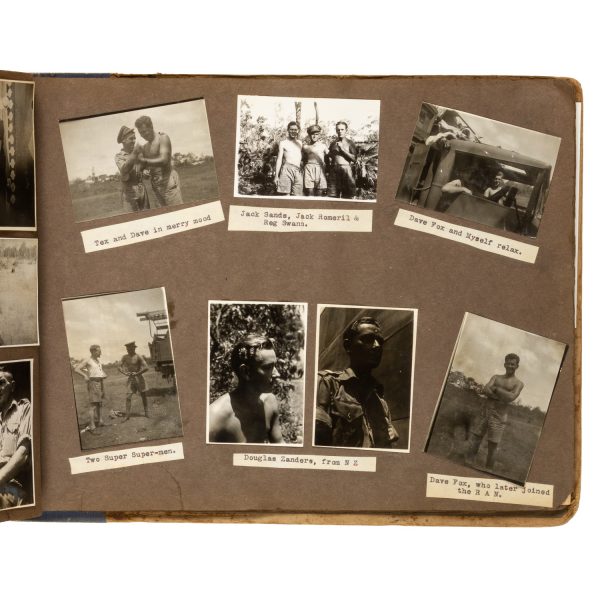 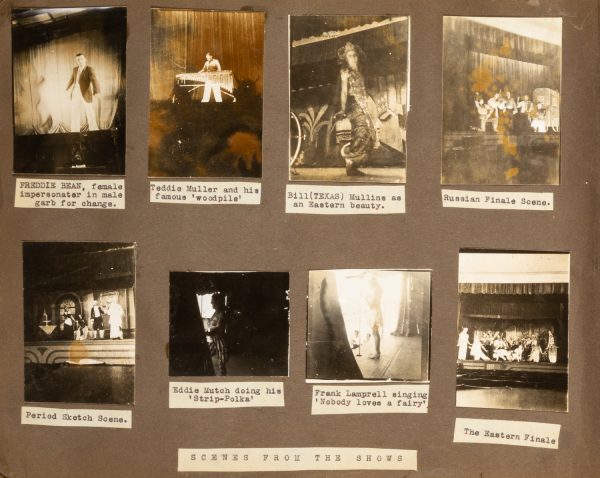 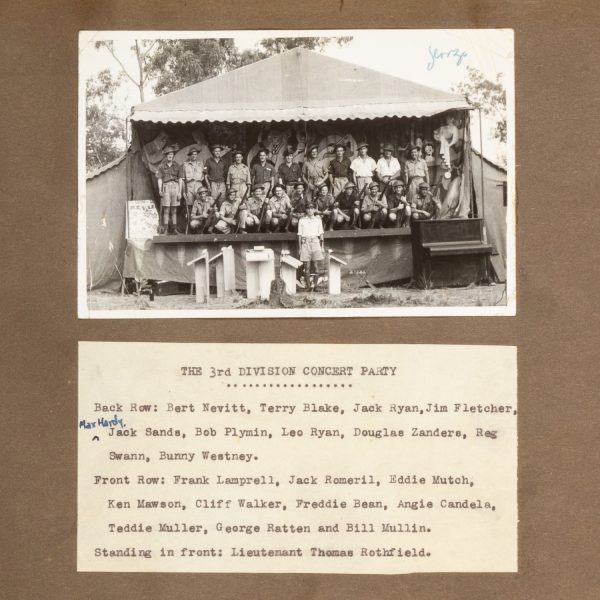 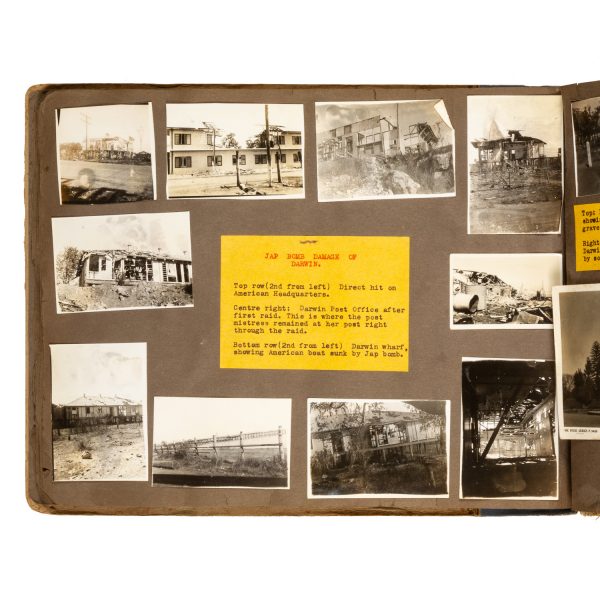 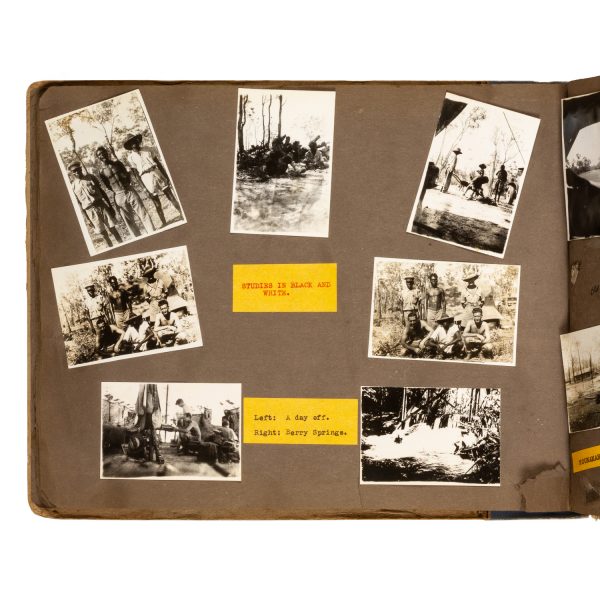 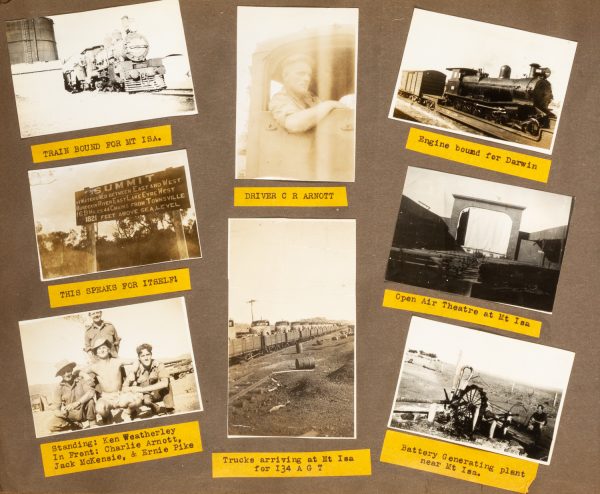 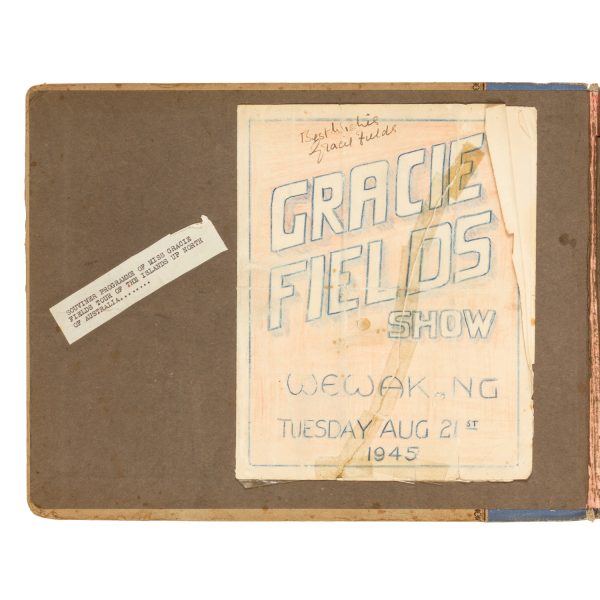 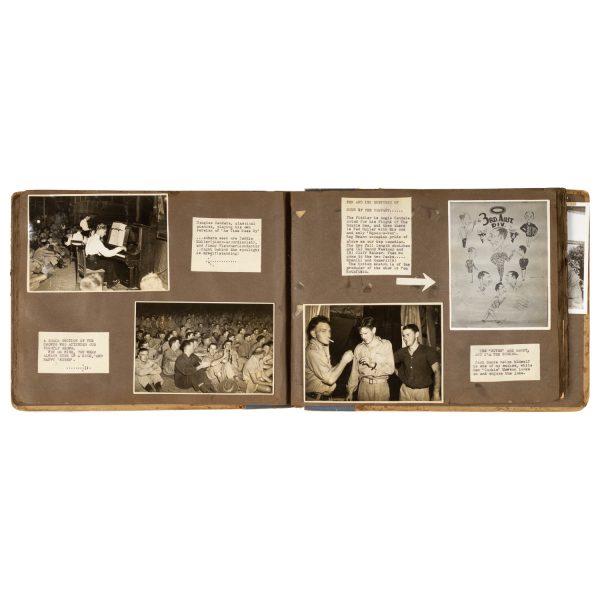 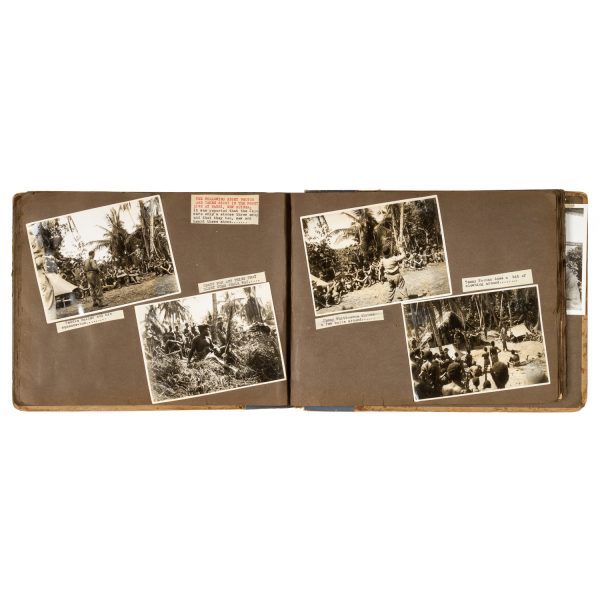 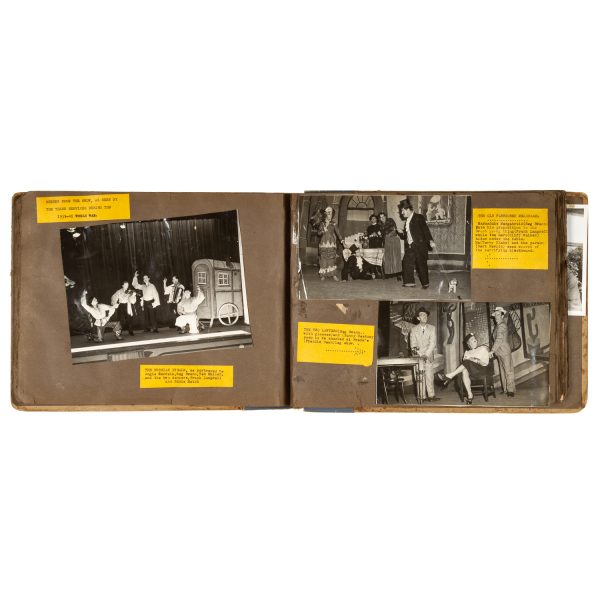 Photograph album. Oblong quarto, 250 x 340 mm, quarter cloth over papered boards decorated and lettered by hand (scattered stains, splits to cloth spine), the front pastedown with a rare concert programme from the Gracie Fields Show at Wewak on 21 August 1945, signed by the famous English entertainer herself; the album contains approximately 300 mounted gelatin silver photographs, of which around 280 – clearly taken by an amateur photographer with a private camera, and most likely unique images – are in snapshot format (60 x 90 mm), and 16 in larger format (up to 150 x 200); all pages have typed caption labels; in addition, there is a significant number of mounted postcards, souvenirs from places around Australia visited by the Concert Party; the album’s contents are complete and well preserved, with the pages free from foxing and the photos themselves unfaded; the hinges of the album are split but the binding is holding well.

A remarkable album of private photographs compiled by an Australian soldier from Melbourne who was attached to the 3rd Australian Division Concert Party during World War Two. This unit, comprised of musicians and vaudeville performers, commenced tours of Australia in 1942, but in early 1945 it became known as Detachment No. 5, 1st Australian Entertainment Unit, and was sent to entertain Australian troops in the front line in New Guinea and New Britain. It did not return to Australia until January, 1946.

The early part of the album documents the soldier’s experiences with the Concert Party in Australia from 1942 to 1944 (in Victoria, New South Wales, Far North Queensland and the Northern Terrritory), and includes unique photographs of productions at Alice Springs and the Gorrie RAAF base in the Territory, the devastation caused by the Japanese bombing of Darwin, Aborigines, and snaps of the soldiers enjoying rest and recreation.

The second half of the album records the experience of the Concert Party in New Guinea and New Britain during 1945. It contains a large number of photographs illustrating the behind the scenes work involved in erecting a temporary theatre and mounting a production in the tropical heat, as well as many marvellous shots of the shows in progress – taken both from the audience and the stage. There are also many portraits of the performers in and out of costume, plus shots of Japanese prisoners, local people and scenery.

In New Guinea the Concert Party staged performances from Wewak to Aitape on the northern coast, while fighting was still going on the area. A graphic sequence of eight larger format photographs documents several later performances at Sauri on Biak Island where, according to the caption, ‘it was reported that the Japs were only a stone’s throw away and that they too saw and heard these shows.’ The Party’s last few months away from home were spent on New Britain, where they were based in Rabaul.

Although the album has no ownership inscription, we know that its compiler hailed from Melbourne, as the last page has a photographic postcard of St. Kilda Road next to a portrait of the soldier wearing his full uniform, with the caption ‘Through all the travelling with the Concert Party, we discovered that there is only one place in our minds … the best little place in the whole wide world, and we should know….’ Further research will surely reveal the identity of the album’s compiler.