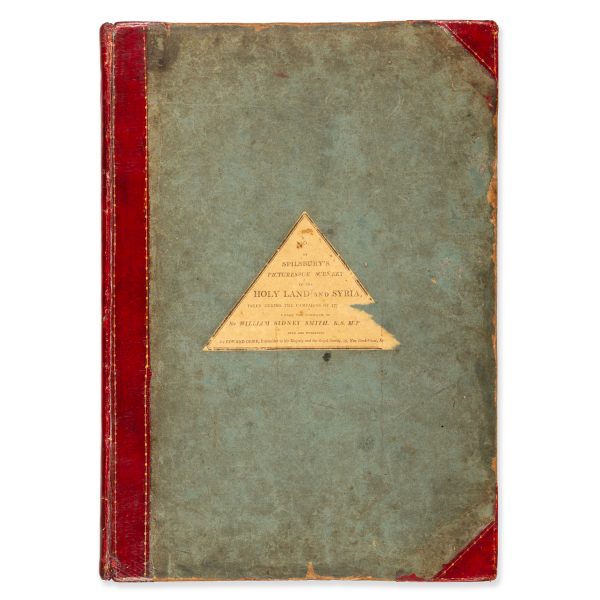 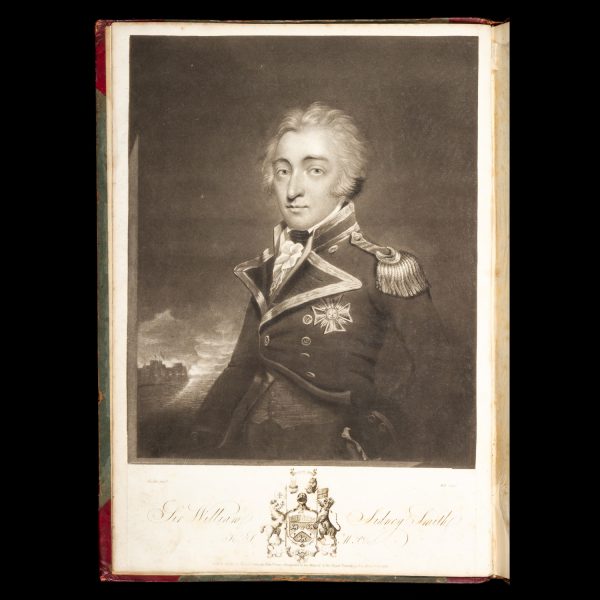 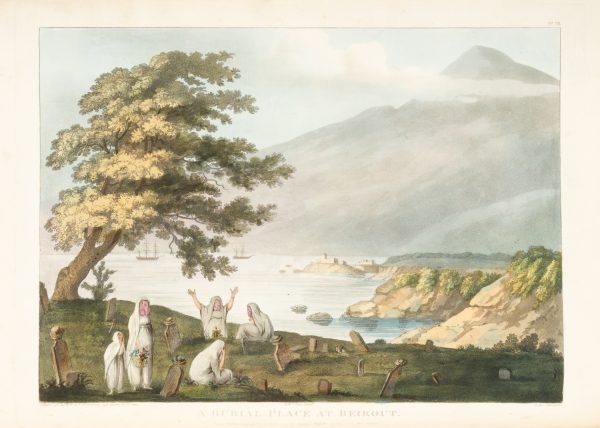 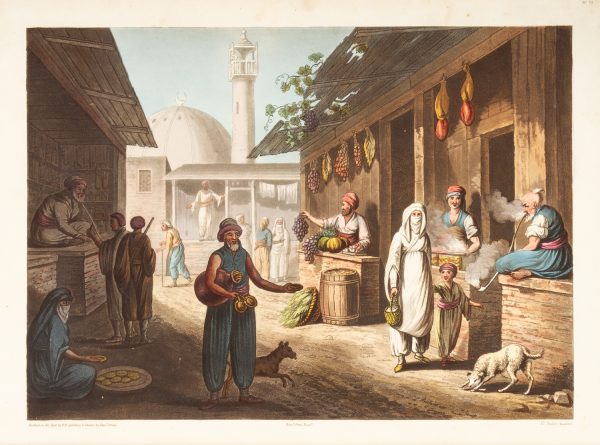 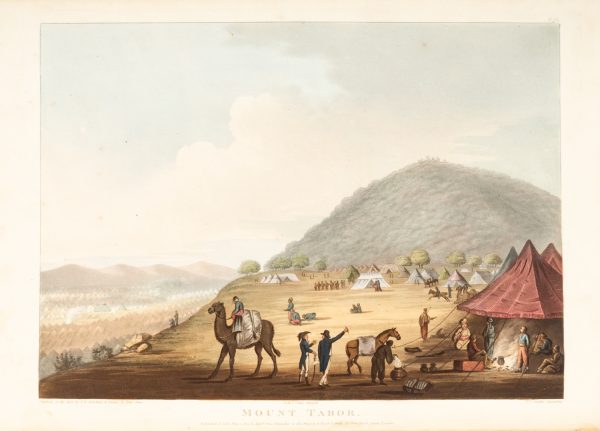 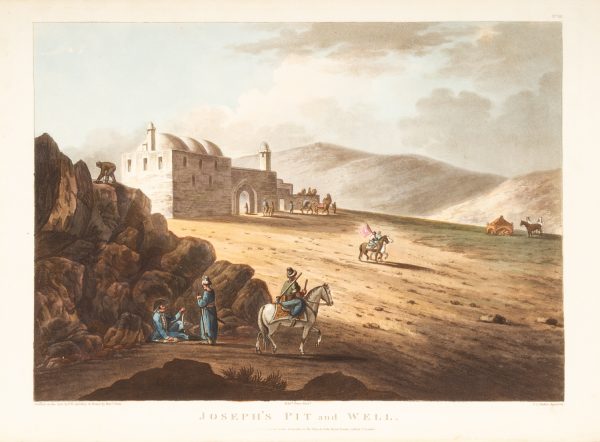 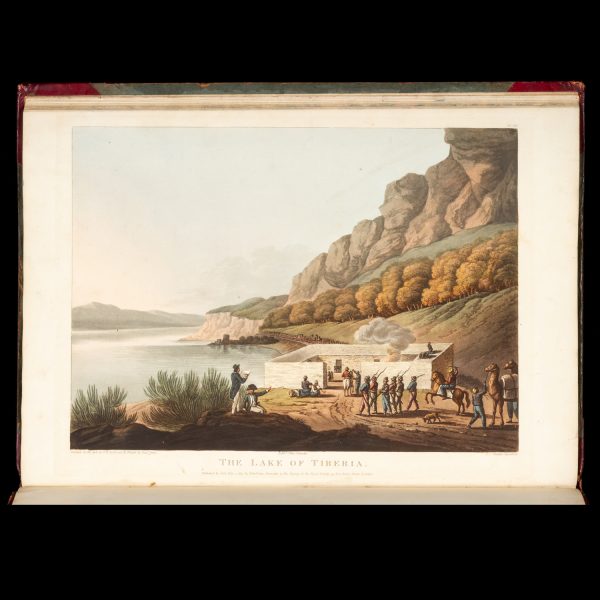 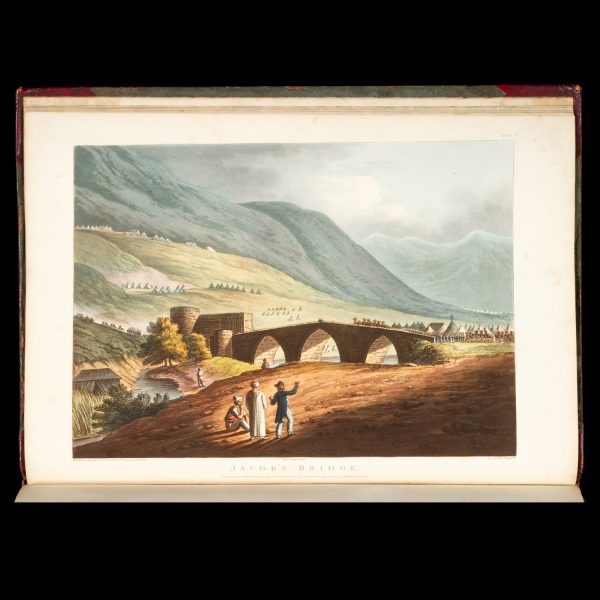 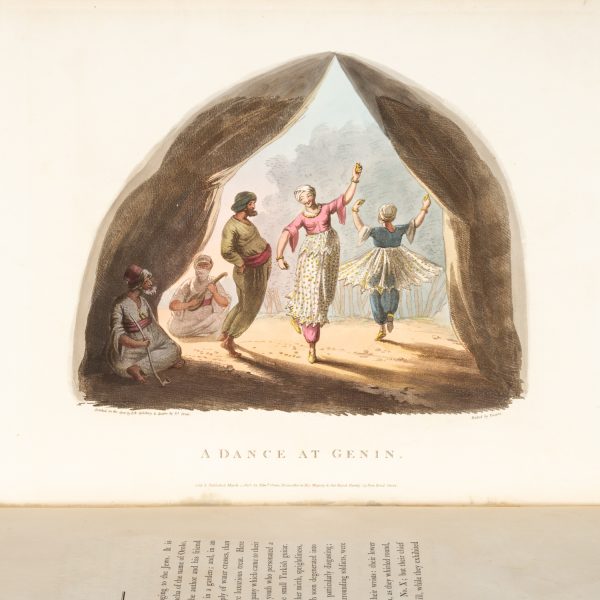 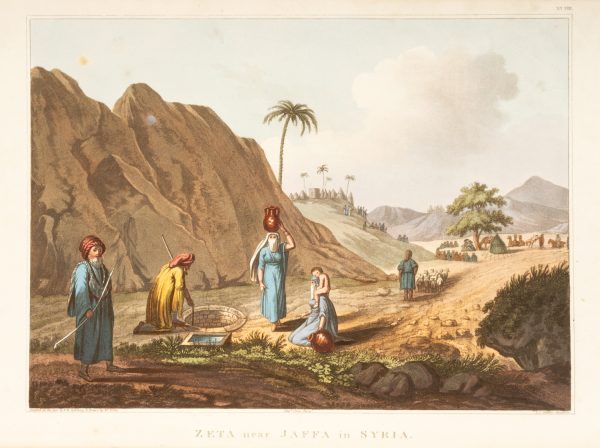 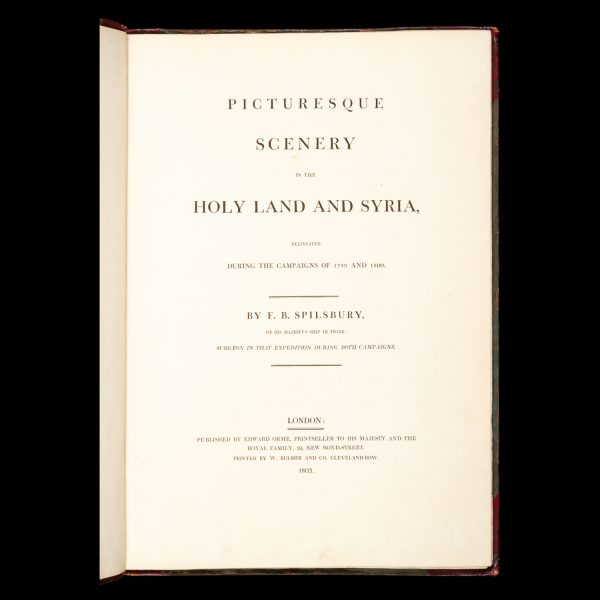 Picturesque scenery in The Holy Land and Syria, delineated during the campaigns of 1799 and 1800.

/ By F. B. Spilsbury, of His Majesty’s ship Le Tigre; surgeon in that expedition during both campaigns. London : Published by Edward Orme, Printseller to His Majesty and the Royal Family, 59, New Bond-street. Printed by W. Bulmer and Co. Cleveland-row, 1803. First edition. Large folio (470 x 335 mm), contemporary gilt-ruled half scarlet straight-grain morocco over papered boards, upper board with printed title onlay (boards rubbed, fore-edges a little worn), spine with gilt lettering and ornament, front pastedown with the discreet 19th-century armorial bookplate of William Hales Symons bearing the motto Simplex Munditiis (a quote from Horace) and with a 20th-century ex libris; title leaf, dedication leaf, mezzotint frontispiece portrait of Sir William Sidney Smith (the dedicatee) with tissue guard intact, pp iv, 42, [1 list of the engravings and directions for the binder], + 19 hand-coloured aquatint plates; wide margins, very occasional and insignificant spotting not affecting the plates, which are clean and vivid; a beautiful example in a fully contemporary binding.

First edition of Royal Navy surgeon Francis Spilsbury’s spectacularly self-illustrated account of his travels in the Holy Land and Syria during the Napoleonic campaigns.

During the period 1799-1800 the British and Ottoman Turks were military allies, co-operating to resist Napoleon’s advance in the Levant, in the region that is now divided between present-day Israel, Lebanon and Syria. In his Picturesque Scenery in the Holy Land and Syria, Spilsbury depicts scenes which he witnessed while on active service as surgeon to HMS Le Tigre, the ship that brought Sir William Sidney Smith to defend Acre against the siege by the French, and which spearheaded the naval force that supported the Ottoman forces who were ultimately to relieve the city. After the French defeat at Acre, Napoleon was compelled to retreat to Egypt, leading him to later famously remark that Smith “made me miss my destiny”. Among the places illustrated by Spilsbury are many from the Biblical world; they include Acre, Jerusalem, Jaffa, Mount Tabor, Joseph’s Well, Jacob’s Bridge, Caesarea, the Lake of Tiberia(s), Genin (Jenin), Sidon, Tyre, Beirut, and Tripoli.