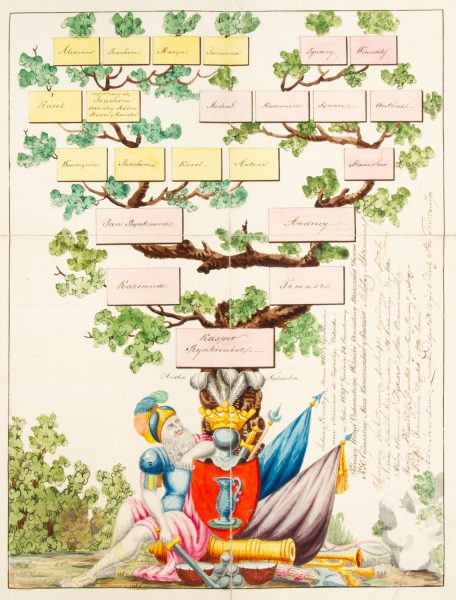 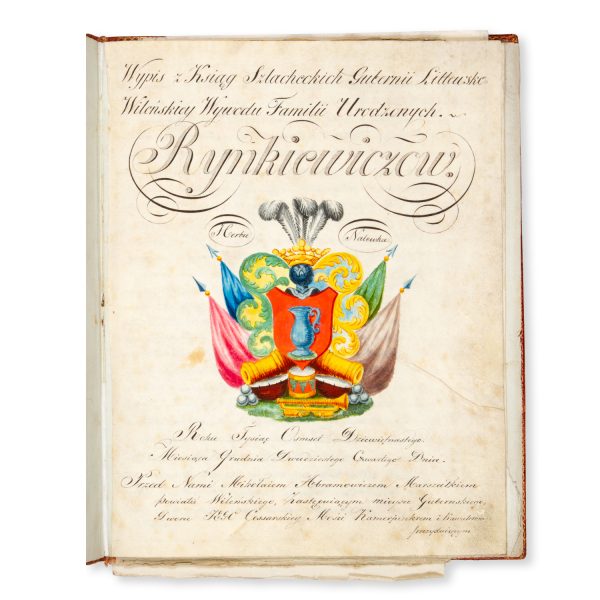 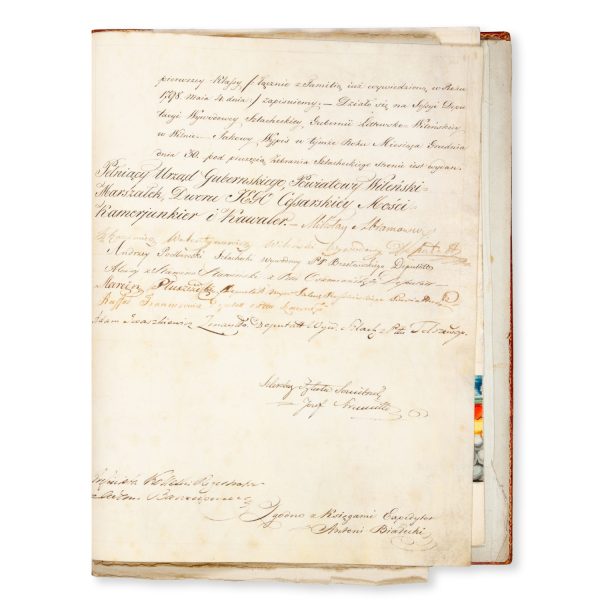 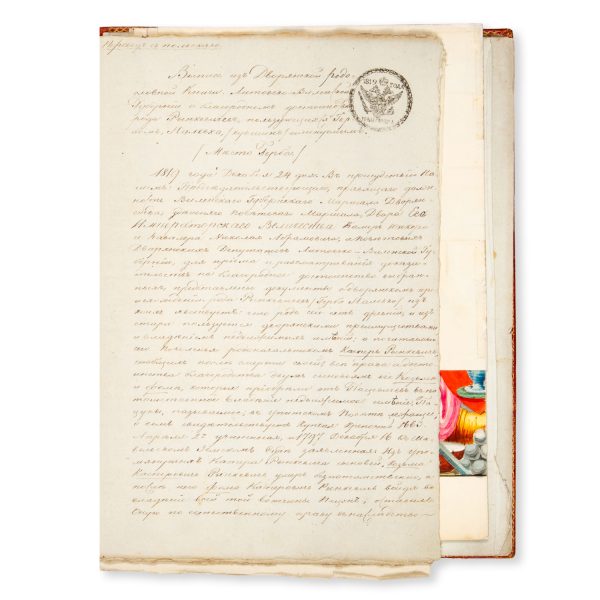 [POLISH NOBILITY IN THE RUSSIAN EMPIRE] Sammelband containing Imperial Russian documents certifying that the family Rynkiewicz is entitled to the privileges of szlachta (nobility). Vilnius, 1819.

Folio (350 x 280 mm), original straight grain red morocco with borders in green morocco elaborately tooled in gilt, upper board with contrasting green morocco label lettered in gilt in Polish (a little rubbed and scuffed); attached by its original cord is a circular brass case (unopened, but likely to contain the seal of herb Nalewka); original string binding and marbled endpapers; ff [2] (blank laid paper); [4] manuscript dated 24 December 1819, in Polish in a legal hand with calligraphic title and watercolour illustration of the Nalewka coat of arms, being an extract from the Books of Nobility of the Lithuania-Vilnius Governorate detailing four generations of the Rynkiewicz lineage starting with Kasper Rynkiewicz and moving forward to the present-day, ennumerating the family’s estates and their serfs, signed by the Marshall of Vilnius Mykolai Abramovicz and notaries recto of last leaf (fine parchment); [4] manuscript Russian translation of the preceding document, with Imperial Russian wet stamp recto of each leaf and Imperial seal at foot (laid paper with Imperial Russian watermark); bifolium with family tree and manuscript in Russian across four pages, certifying that the Rynkiewicz family is entitled to use the Nalewka coat of arms, Imperial wet stamp dated 1819, with notarial signatures and seal of the Russian Foreign Ministry at foot (wove paper with Imperial Russian watermark); large folding sheet (570 x 440 mm), manuscript in Polish with spectacular watercolour illustration in the form of a schematic family tree showing four generations of the Rynkiewicz family and the Nalewka coat of arms, stating that this crest is entered in the Imperial heraldic register, again signed by the Marshall of Vilnius (unwatermarked wove paper); loose at rear is a later document dated 1863 updating the family’s szlachta status, bifolium with manuscript in Russian across the centre pages, with a family tree showing the latest three generations of the Rynkiewicz line, notarial signatures beneath, Imperial Russian administrative wet stamp verso (wove paper with Imperial Russian watermark); all documents well preserved.

The Polish szlachta was a legally privileged noble class that had existed for centuries, first in the Kingdom of Poland and in the Grand Duchy of Lithuania, and later, after 1569, in the unified state known as the Polish–Lithuanian Commonwealth. After the Third Partition of the Polish–Lithuanian Commonwealth in 1795, the city of Vilnius (Polish: Wilno / Russian: Vilna) became part of the Russian Empire under the direct administration of the Lithuania-Vilnius Governorate, or Government of Vilnius, an Imperial Russian governorate which lasted under that name until 1840. Under tsarist rule, the families of the szlachta class living within the Russian Empire, including in cosmopolitan Vilnius, were allowed to maintain their social status and some of their entitlements such as the right to use a heraldic coat of arms, or herb, each one of which was associated with (and shared by) a number of different family names. However, belonging to the szlachta did not guarantee wealth or estates; moreover, it was a requirement imposed by the Imperial administration that each successive generation of a szlachta family was obliged to obtain official certification of their status as nobility by re-applying to the local authorities for the issue of a set of documents such as the ones contained in this Sammelband belonging to the Rynkiewicz family, produced in 1819. The documents certify the direct bloodline from Kasper Rynkiewicz, the progenitor who had been “ennobled” in the late 17th century, through Joachim Rynkiewicz (b.1770), a State Councillor who had received Russian decorations, down to his four children, Alexander, Joachim, Maria and Tatiana, and their cousins Ignas and Vincent. They also permit the family to use the Nalewka herb.