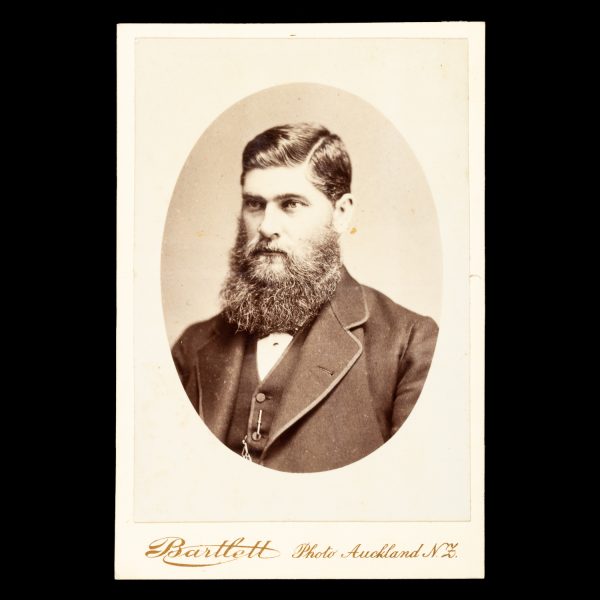 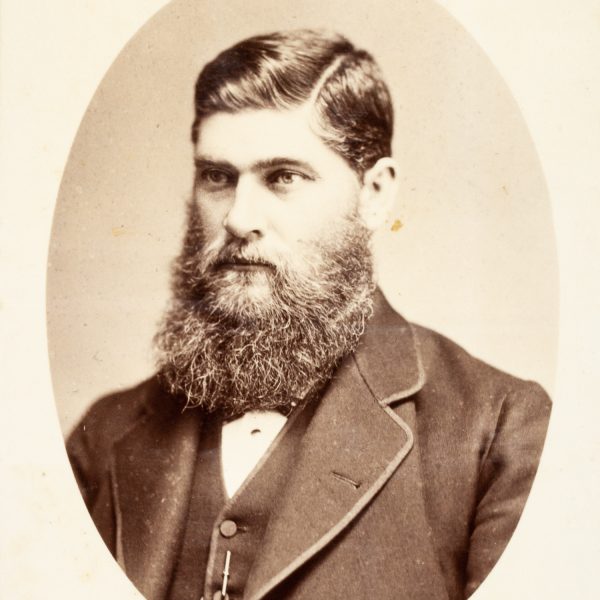 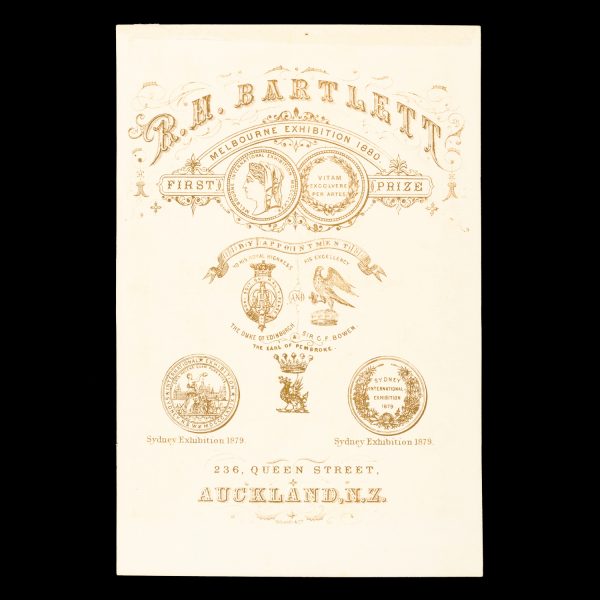 Albumen print photograph, cabinet card format, 163 x 108 mm; verso with gilt imprint of R. H. Bartlett, 236 Queen Street, Auckland, illustrating medals awarded to him at the 1879 Sydney Exhibtion and the 1880 Melbourne Exhibition (first prize), and advertising his studio as By Appointment to His Royal Highness The Duke of Edinburgh, His Excellency G. F. Bowen, and the Earl of Pembroke; both the print and mount are in fine condition; accompanied by a pencilled caption, cut from the photograph’s original album window mount, identifying the sitter as ‘Judge H. W. Brabant’.

Provenance: from a family photograph album compiled by a female member of the family of John Sperry (1829-1890), Lands Commissioner, who was the father of New Zealand artist Eleanor Kate Sperry (1862-1893). The Sperrys were closely connected with the Buller and Mair families.

The following is a contemporary biographical sketch of Herbert William Brabant (1838-1919), from The Cyclopedia of New Zealand:

‘Stipendiary Magistrate and Judge of the Native Land Court of New Zealand, [Brabant] is the eldest son of the late Mr. William Hughes Brabant, solicitor, of Savile Place, London, and of Cannon Hall, Hampstead, Middlesex. He was born in Curzon Street, Mayfair, London, on the 19th of March, 1838, and was educated at private schools and at Gonville and Caius College, Cambridge. In June, 1859, he sailed from Plymouth in the ship “Joseph Fletcher,” Captain Pook, and landed at Auckland in September of the same year. He visited Taranaki a year later and served for a short time as a volunteer, but was engaged principally in farming pursuits up to June, 1867, when he entered the New Zealand Civil Service as clerk to the Bench at Raglan, on the West Coast of the Province of Auckland. He was appointed Resident Magistrate at Opotiki, in the Bay of Plenty, in December, 1871, which office he filled up to May, 1876, when he was transferred to Tauranga, remaining there until April, 1888. Mr. Brabant was appointed a Judge of the Native Land Court in December, 1886, and still holds this office. In April, 1889, he was appointed Resident Magistrate at Wanganui, and on the passing of the “Magistrates’ Court Act, 1893,” he became a Stipendiary Magistrate of the Wanganui, Hawera, Marton’ and several other Courts. Judge Brabant has filled a number of other important offices in conjunction with that of Magistrate. He was gazetted a captain in the New Zealand Militia in 1871. Three years later he was appointed a coroner for the Colony. From 1876 to 1888 he was in charge of native affairs in the Bay of Plenty district, and from 1876 to 1886 (except for a short interval) he was a commissioner under the “Tauranga District Lands Act,” and completed the sub-division of the confiscated lands under that Act in 1886. He was also the first chairman of the Rotorua Town Board, which office he held until the beginning of 1885. In 1893, in conjunction with Mr. District Judge Kettle, he was engaged in the preparation of the rules of practice and formulary under the “Magistrates’ Court Act, 1893.” Judge Brabant is married and has a family of ten sons and three daughters, most of whom are grown up. His second daughter is the wife of Mr. G. E. Richardson, second son of the Hon. E. Richardson, C.M.G., M.L.C. Judge Brabant’s residence is Rawhiti, St. John’s Hill, near Wanganui. [in February, 1897, Mr. Brabant was transferred from Wanganui to Auckland, Mr. Northcroft, S.M. at Auckland, taking up his duties at Wanganui.]’