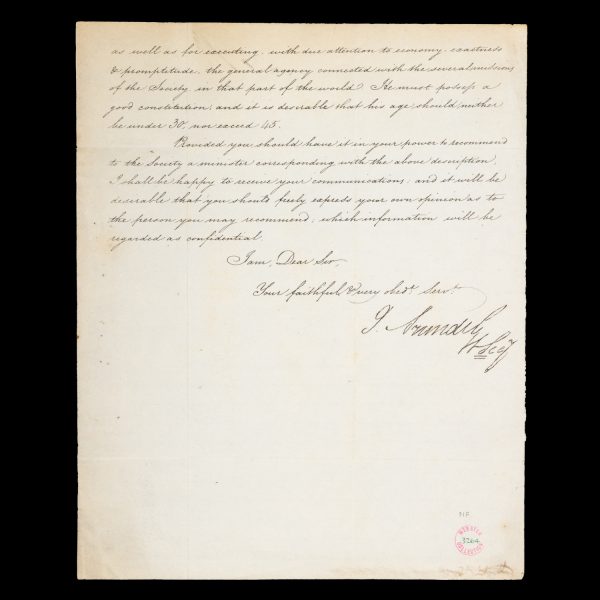 Although it is not made explicit in this circular, the London Missionary Society’s decision to cast about for recommendations for a resident representative in New South Wales had probably been prompted by the ongoing allegations about the misconduct of Rev. Samuel Marsden (1765-1838), the colony’s principal chaplain, who had acted as the LMS agent in Sydney since 1801.

In an attempt to clear his name, Marsden had even gone so far as to publish in London in 1826 An Answer to certain calumnies in the late Governor Macquarie’s pamphlet, and the third edition of Mr. Wentworth’s Account of Australasia. Marsden ‘had been accused of inflicting cruel sentences upon prisoners, employing labour on Sundays, selling liquor, and other charges’, and this pamphlet was a ‘triumphant vindication of himself’ (Ferguson, 1085). Marsden had also been suspended as a magistrate by Macquarie’s successor, Governor Brisbane, and been overlooked as Archdeacon in favour of Thomas Scott. In August 1826 – the same month that this LMS circular was disseminated – Lord Bathurst told Governor Darling that Marsden was to ‘repress that vehemence of temper which has too frequently marked his conduct of late, and which is as little suited to his Age, as it is to the profession to which he belongs’ (ADB).

If Marsden was deemed potentially unsuitable to serve as the LMS representative in the colony, then so too was the missionary Rev. Lancelot Threlkeld, whose expenditure at the Lake Macquarie Mission had already brought him into conflict with Marsden, and would lead less than two years later to his dismissal by the LMS and the abandonment of his first mission to the Aborigines.

In the event, it was Marsden who would be retained as LMS agent in New South Wales up until his death in 1838.

Rare. Not in Ferguson; no copy traced in Australian collections.

The Directors being of the opinion that the object of the Society will be greatly promoted by its having a Resident Representative at Sydney, in the Colony of New South Wales, I have been instructed by them [to] respectfully request that, with prayer for direction, you will look around the circle of your connexions and acquaintance for a person professing the undermentioned qualifications and disposed to engage in the service of the Society, as proposed.

The individual whom the Directors would engage for the service in question, must be a Minister who unites to decided and exemplary piety, a missionary, catholic and liberal spirit; and amiable temper, conciliating manners and a good personal address. As the formation of a congregation is one of the immediate objects in view, he should possess rather superior preaching talents, with respectable attainments in theology; also in general literature and in science. He must be a person of firm and active mind, of prudent and economical habits, with experience and knowledge of the world, and possessing such acquaintance with its forms, and with general business, as will fit him for occasional communications and correspondence with the Local Authorities, as well as for executing, with due attention to economy, exactness & promptitude, the general agency connected with the several missions of the Society in that part of the world. He must possess a good constitution, and it is desirable that his age should neither be under 30, nor exceed 45.

Provided you should have it in your power to recommend to the Society a minister corresponding with the above description, I shall be happy to receive your communications, and it will be desirable that you should freely express your own opinion as to the person you may recommend; which information will be regarded as confidential.‘

Kenneth Athol Webster (1906-1967) was a New Zealand-born dealer and collector in manuscripts, books, paintings and ethnographic artefacts relating to the Pacific. In the two decades after World War Two he built one of the largest and most important collections of this type of material ever assembled.

NOTE ON THE LONDON MISSIONARY SOCIETY

‘The Missionary Society was founded in 1795 by a group of Anglican and non-conformist clergy in London. It later became known as the London Missionary Society (LMS) and was supported largely by the Congregational Church, especially after the formation of similar societies, such as the Methodist Missionary Society, diverted funds and manpower away from the LMS. The Society pioneered mission work in many parts of the world, including Australia, the East Indies, the Pacific Islands and Papua.

The Missionary Society was established by a group of Evangelical Anglican and Nonconformist laymen and ministers. They included George Burder of Coventry, David Bogue of Gosport, John Eyre of London, Matthew Wilks of London, William Roby of Manchester, Thomas Haweis of Northamptonshire, Samuel Greatheed of Newport Pagnell and John Love of Paisley. The name of the society was changed to the London Missionary Society in 1818. It was originally a non-denominational organisation but, following the formation of denominational societies such as the Church Missionary Society and the Methodist Missionary Society, it gradually became closely associated with the Congregational Church.’ (National Library of Australia)