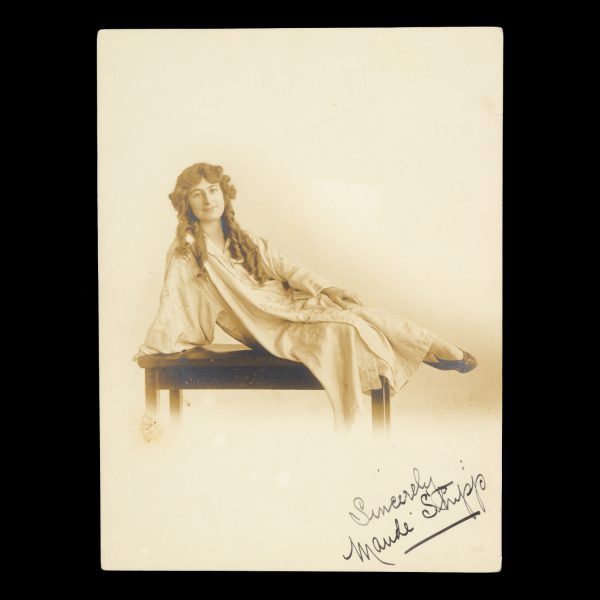 An apparently unrecorded studio portrait of Sydney vaudeville star Maude Shipp. It was taken by Sydney photographer W. G. Murmann, who advertised his studio at 80 Hunter Street in Sydney newspapers from 1914 until 1920.

Murmann appears to have specialised in portraits of Sydney theatre personalities. The National Library of Australia holds one of his portraits of stage and screen actress Vera Pearce, and the State Librray of Victoria holds his portrait of comedian Bert Frawley. The National Portrait Gallery (Canberra) holds a companion promotional photograph of Shipp “in character”, also taken in the Murmann studio (but note that the NPG catalogue entry incorrectly identifies the photographer as Munnan).

‘Maude Shipp (1895-1964), vaudevillian, debuted as ‘Little Maude Shipp, the Wonderful Baby Performer’ around May 1900, as a member of the troupe managed by her father, Edwin ‘Teddy’ Shipp (c. 1858–1923). Throughout the First World War and into the 1920s, she appeared in numerous productions and with a series of companies around New South Wales and interstate. One 1922 reviewer described her as ‘a clever and entertaining little comedienne’ whose dancing was a ‘revelation’. Another, writing in 1933, wrote that she was ‘classed as Australia’s foremost comedy performer’: ‘She is full of life as a dancer and it is claimed that she is one of the best dancers on the Australian stage today’. By the late 1930s, Shipp had moved into radio and as ‘Auntie Maude’ had regular spots with 2UE and 2KY while maintaining a schedule of live performances. During World War 2, she lent her services to fundraising and morale-boosting variety shows and talent quests. She married actor John Read, with whom she’d performed in the 1920s, in 1941.