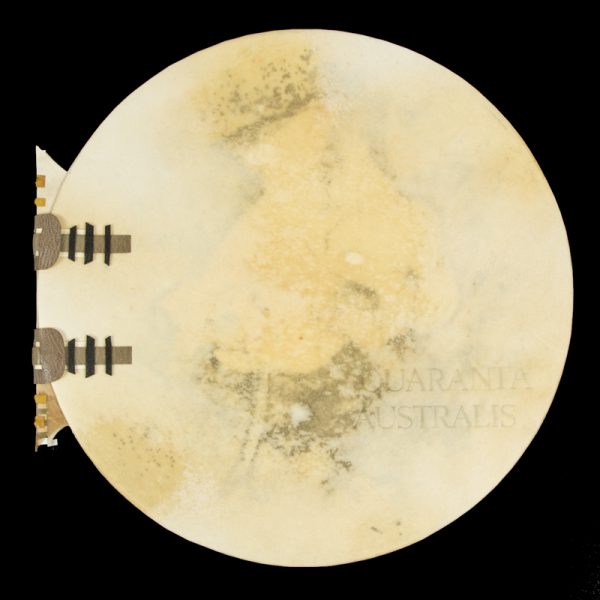 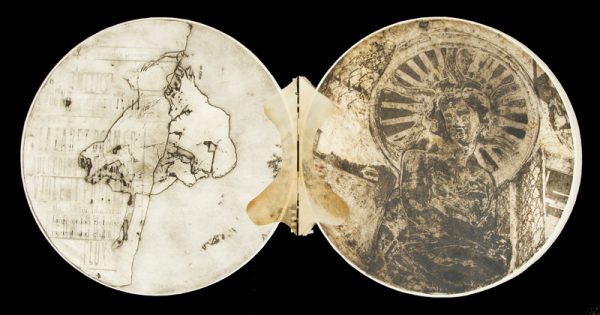 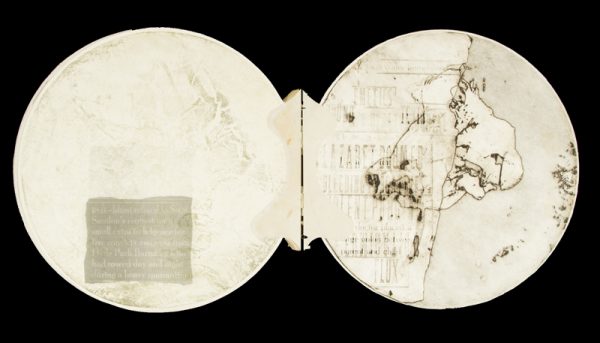 Sydney : Gwen Harrison and Sue Anderson, 2008. Artists’ book, circular shape (395 mm tall), the 20 pages each consisting of an original etching printed on Japanese tissue, laid on paper sheets, mounted with a vellum stub and bound in to an embossed vellum binding with goatskin cords, presented in a folding clamshell box by Wayne Stock. Edition limited to 4 copies, each unique, signed and numbered by the artists.

A spectcular artistic response to the issues of refugees, detention and the integration of migrants into Australian society. The text quotations are sourced from “In quarantine” by Jean Foley, Sydney: Kangaroo Press, 1995.

“The artists reveal their response to Sydney’s historical colonial site, the Quarantine Station, where the unwanted and marginalised were incarcerated. Their work conveys strong parallels to today’s displaced peoples.” – National Library website.

“The North Head area was used for quarantine of travellers by sea and then by air from 1828. While only a small proportion of immigrants to Australia were interned at the Quarantine Station it is important as a symbol of this process and particularly of the concern that diseases would be contained and the populace would be kept safe. The evolution of the present form of the Quarantine Station was influenced by the modernisation of public health, Australian self-management and a response to local conditions. The principles of human quarantine in the 19th and 20th centuries are illustrated in the overall layout of the Quarantine Station and in its isolated setting. Overlaid on the functional concerns of disease control is the evidence of social stratification, shown in the segregation of passenger accommodation into classes, and the different standards of accommodation which were provided for each. Very few places in Australia retain a setting or a complex of buildings which is so clearly able to demonstrate the notions of class and racial segregation practised in Australia until after World War II”–Environment & Heritage, New South Wales, as at 5/12/2012.” – State Library of New South Wales website.