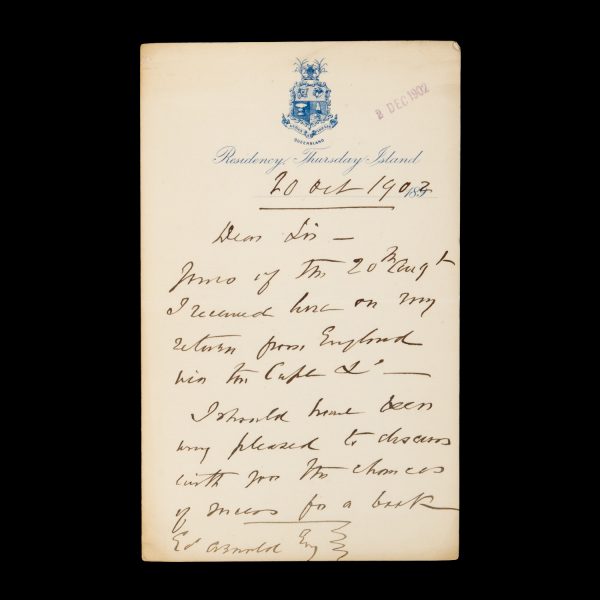 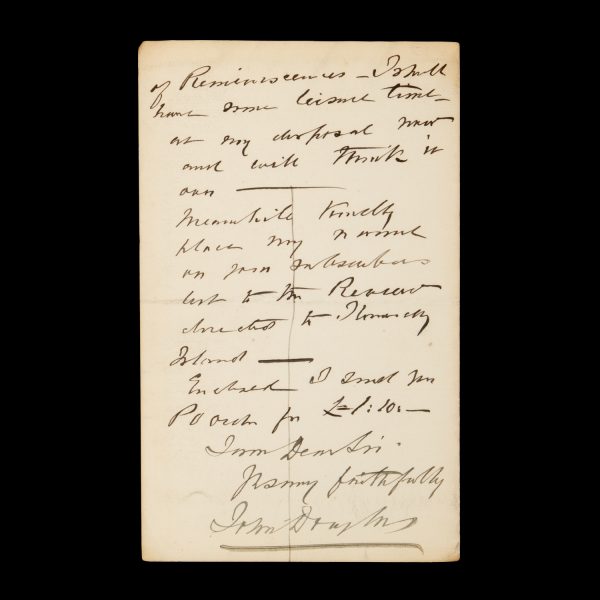 [QUEENSLAND] John Douglas, Government Resident and magistrate at Thursday Island : autograph letter, signed, to a London publisher regarding a book of his memoirs. October, 1902.

Bifolium, 203 x 125 mm, Queensland Government watermarked paper, lithographed letterhead with State of Queensland crest and ‘Residency, Thursday Island’; manuscript in ink on [2] pp, dated 20 October 1902, to Edward Arnold, British publisher: ‘I should have been very pleased to discuss with you the chances of success for a book of Reminiscences – I shall have more leisure time at my disposal now and will think it over’; Douglas also asks to be placed on Arnold’s list of subscribers; wet stamp recording date of receipt as 2 December 1902; a very well preserved letter.

John Douglas (1828-1904) had formerly served as Treasurer (1866-67) and Premier of the Colony of Queensland (1877-79). In 1885 he was appointed government resident and magistrate at Thursday Island. Following the death of Scratchley, he acted as special commissioner for the protectorate of British New Guinea (1886-88), before resuming his position on Thursday Island. He visited England in 1902 (a fact alluded to in the present letter), and returned thereafter to T.I., where he remained until his death. The ‘book of Reminiscences’ he proposes in this letter to Edward Arnold never eventuated.